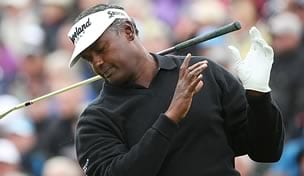 This is not a love story. In the world of big-money, sports-hero worship has become an unrequited pastime best left to the innocence of children and fools.

From Lance Armstrong on Oprah’s couch to Roger Clemens’ dogged denials, we’ve been conditioned to lower our expectations, not to mention our ability to be shocked. There was no handwringing then when the last 24 hours delivered the classic doping dance.

Buried some 39 paragraphs into a 69-paragraph opus on SportsIllustrated.com, in itself a measure of how cavalier we have become about doping in professional sport, came news on Tuesday that Vijay Singh regularly used the Ultimate Spray, a liquid derived from deer antlers that contains IGF-1 (insulin-like growth factor).

Sobel: Singh did the crime, now he should do the time

According to the company that sells the spray, S.W.A.T.S. (Sports with Alternatives to Steroids), IGF-1 is a natural, anabolic hormone that stimulates muscle growth. It’s also universally banned by every major sports league including the PGA Tour.

In an interview last week with Sports Illustrated, Singh said he used the spray “every couple of hours … every day,” and “sleeps with the beam ray on and has put chips on his ankles, waist and shoulders.”

“I’m looking forward to some change in my body,” Singh told the reporter. “It’s really hard to feel the difference if you’re only doing it for a couple of months.”

On Wednesday, Singh did what every athlete backed into a doping corner would do – deny, deny, deny.

“While I have used deer antler spray, at no time was I aware that it may contain a substance that is banned under the PGA Tour anti-doping policy,” he said in a statement.

“In fact, when I first received the product, I reviewed the list of ingredients and did not see any prohibited substances. I am absolutely shocked that deer antler spray may contain a banned substance and am angry that I have put myself in this position.”

Never mind that IGF-1, which is what HGH is converted into in the liver, has been on the Tour’s list of banned substances since it began testing in 2008. Never mind that on Aug. 17, 2011, the Tour issued an “anti-doping warning” via the green sheet which is circulated to players monthly that cautioned players about the spray and reiterated IGF-1’s status as a banned substance.

“Deer antler contains IGF-1 which naturally occurs in the human body and is a growth factor, like human growth hormone. IGF-1 protects cartilage, promotes the growth of bone cells, and facilitates recovery. It is universally banned in all sports.”

Never mind that there are few players on Tour who spend more time tuning body, mind and swing than Singh. Never mind that the Fijian has scorched conventional wisdom having won more events in his 40s (18) than he did in his 20s and 30s combined (16).

Never mind that on S.W.A.T.S’ own website they list IGF-1 not once but twice as an active ingredient in the Ultimate Spray and characterize it as “a precursor for the production of growth hormone (HGH).”

Never mind that under the Tour’s anti-doping policy while HGH and IGF-1 are banned, there is no current test for either substance. “We have not determined a reliable test for it,” said Ty Votaw, the circuit’s executive vice president of communication and international affairs.

It’s the same in most other sports because the only way to test for HGH or IGF-1 is via a blood sample and union athletes and independent contractors have shown an almost universal reluctance to do that.

The only law that applies here is that athletes are responsible for what they put in their bodies and while being “angry” that he inadvertently juiced may work in the court of public opinion the doping courts take a slightly harder line (see Barron, Doug 2009).

There is no small amount of irony that the same month that baseball’s Hall of Fame refused to induct anyone into Cooperstown because of the pall cast over the game by the so-called “steroids era” sees a member of Golf’s Hall of Fame run afoul of the circuit’s doping standards.

An aside to the current dust up with Singh is that, according to two longtime Tour trainers, the Fijian could have been doing shots of the deer antler spray every hour for a year and it would provide virtually no performance benefits.

“You can get stuff off the counter at GNC that is legal that would provide better muscle growth and recovery,” said one trainer.

But in the dogmatic world of anti-doping neither intent nor outcome justifies the crime. How the Tour plans to proceed next is the million dollar question – or maybe it’s the $9,000 question, which is how much Singh reportedly paid for the spray, chips, beam ray and powder additive in November.

It is not the best-case scenario for Ponte Vedra Beach, Fla., considering that a high-profile player has admitted publically that he used a banned substance that would otherwise be undetectable to Tour testers.

One can only imagine that Barron, who is the only player suspended under the Tour’s anti-doping policy for using testosterone and beta blockers that had been prescribed by his doctors for health reasons, will be paying particularly close attention.

As for the rest of us, well, we’ll probably move on because we’ve learned that expecting too much out of our athletes is a recipe for disappointment. It took golf a little longer than other sports to reach this desensitized crossroads but it seems we’re finally there.