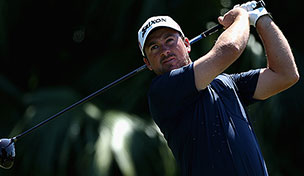 DORAL, Fla. – A weekend pairing with Tiger Woods is never easy, unless you are Graeme McDowell, who has some history out-dueling the world No. 2 in head-to-head pairings.

At the 2010 Chevron World Challenge, the Northern Irishman played the ultimate spoiler, carding a 69 to Woods’ 73 on Sunday to force extra holes, which McDowell won with a closing birdie.

On Saturday, McDowell will get another turn paired with Woods at the WGC-Cadillac Championship after a pair of closing birdies moved him to within two strokes of the leader.

It has already been an eventful year for McDowell. He announced earlier this season he plans to get married in September and will open a new restaurant next week in Orlando, Fla., called Nona Blue.

“It's nice to have nice positive influences off the golf course to keep you occupied, I guess,” he said. “I've got some good stuff going on in my life, which helps me relax and takes the mind off golf during weeks off, I suppose.”