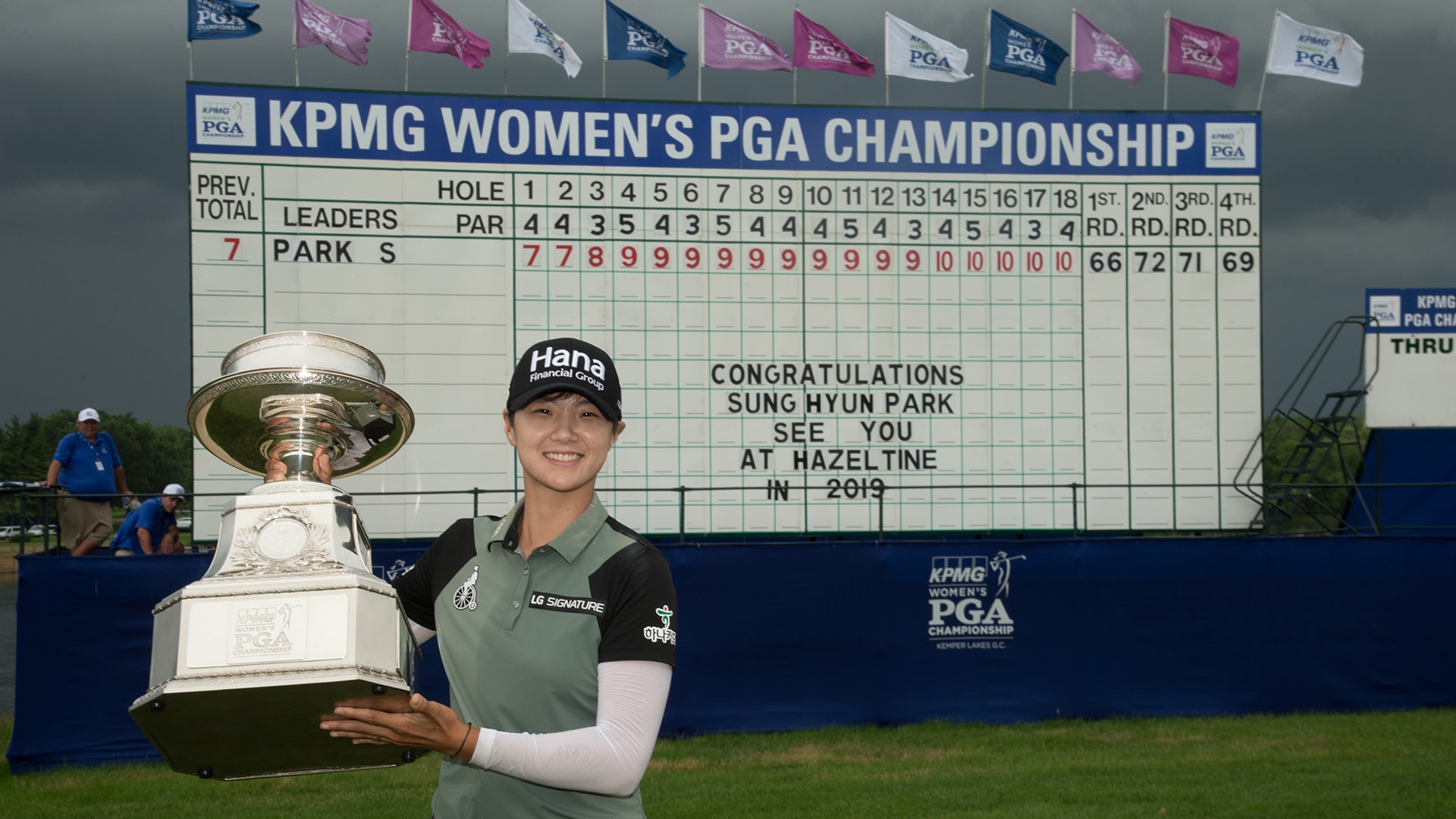 It continues to open important doors for women.

It’s opening doors beyond golf and the pedigree a course like Hazeltine National Golf Club offers this week, with its history hosting the U.S. Open (1970, ’71), PGA Championship (2002, ’09) and the Ryder Cup (2016). It’s opening doors to women in whatever profession they choose to pursue.

This is what set the KPMG Women’s PGA Championship apart as a major when it was launched five years ago. The KPMG’s Women’s Leadership Summit made the event about more than celebrating excellence in sport.

“Our players see how this event is leaving a bigger footprint, beyond golf,” LPGA commissioner Mike Whan said.

The inaugural women’s summit at Westchester Country Club struck a nerve with businesses who began seeing a new opportunity with the LPGA, one focused on women’s empowerment.

That first KPMG Women’s Leadership Summit spawned a wave of similar women’s leadership conferences during tournaments, with the Bank of Hope Founders Cup, the ANA Inspiration and a dozen other LPGA events following suit.

The LPGA’s new “Drive On” marketing campaign evolved out of this new focus.

The campaign is about diversity, inclusion and women’s empowerment within the LPGA ranks, themes Whan says have been “in the tour’s DNA” for all 70 seasons of its existence.

The third commercial in the “Drive On” campaign is being released this week.

In fact, Whan says former IBM chief marketing officer Jon Iwata teed up the “Drive On” campaign after he joined the tour’s board of directors.

“Hey Mike, when you are out selling the LPGA, what are you selling?’” Iwata asked Whan late last year.

Whan told him he was selling interaction with athletes, hospitality and the friendliness of the tour’s product.

Iwata shook his head. He told Whan that after attending the KPMG Women’s Leadership Summit, and then summits at three other events, he saw businesses buying into something the LPGA exhibits beyond golf.

“At that moment, we all looked around the table, and thought, 'Shame on us,’” Whan said. “Our sponsors were already seeing in the LPGA what we weren't reflecting back in ourselves.”

That’s why Jin Young Ko, Lexi Thompson and Brooke Henderson aren’t the real headliners at Hazeltine this week. Condoleezza Rice and Mia Hamm are the headliners. Rice, the former Secretary of State, is back as one of the summit’s keynote speakers. Hamm, the World Cup and U.S. Olympic women’s soccer star, is being presented the KPMG Inspire Greatness Award.

“Here is a startling statistic that I think proves that this is working,” KPMG chairman and CEO Lynne Doughtie said. “Nearly half of the women who have been part of our previous summits have been promoted.”

KPMG released a study during the summit outlining challenges executive women face in advancing their careers.

Whan likes the LPGA being a showcase for more than golf.

“We've realized, as companies have started to join us, is they like what we represent, and what it means even inside their own buildings,” Whan said.

“We have been in this space for 70 years. We're just adjusting the mirror. We've never really let the reflection be right back on us. We have always kind of showed what we thought people wanted to see, as opposed to just showing us.”

Roberta Bowman came to the LPGA last year as its new chief brand and communications officer. She’s a former Duke Energy senior vice president. She played a large role in developing the “Drive On” campaign after Itawa connected the tour with the Ogilvy advertising and marketing agency.

“This event has allowed us to think about reframing the business case for women's sports, and women's golf in particular,” Bowman said. “The coupling around leadership and diversity inclusion, core objectives of virtually every corporation in the world today, has made people look at the LPGA differently and see possibilities.”

Bowman sees the coupling of the Women’s PGA’s first-class setup at Hazeltine and the KPMG summit bolstering player pride.