Haley Moore finding her footing - and comfort - on the professional level 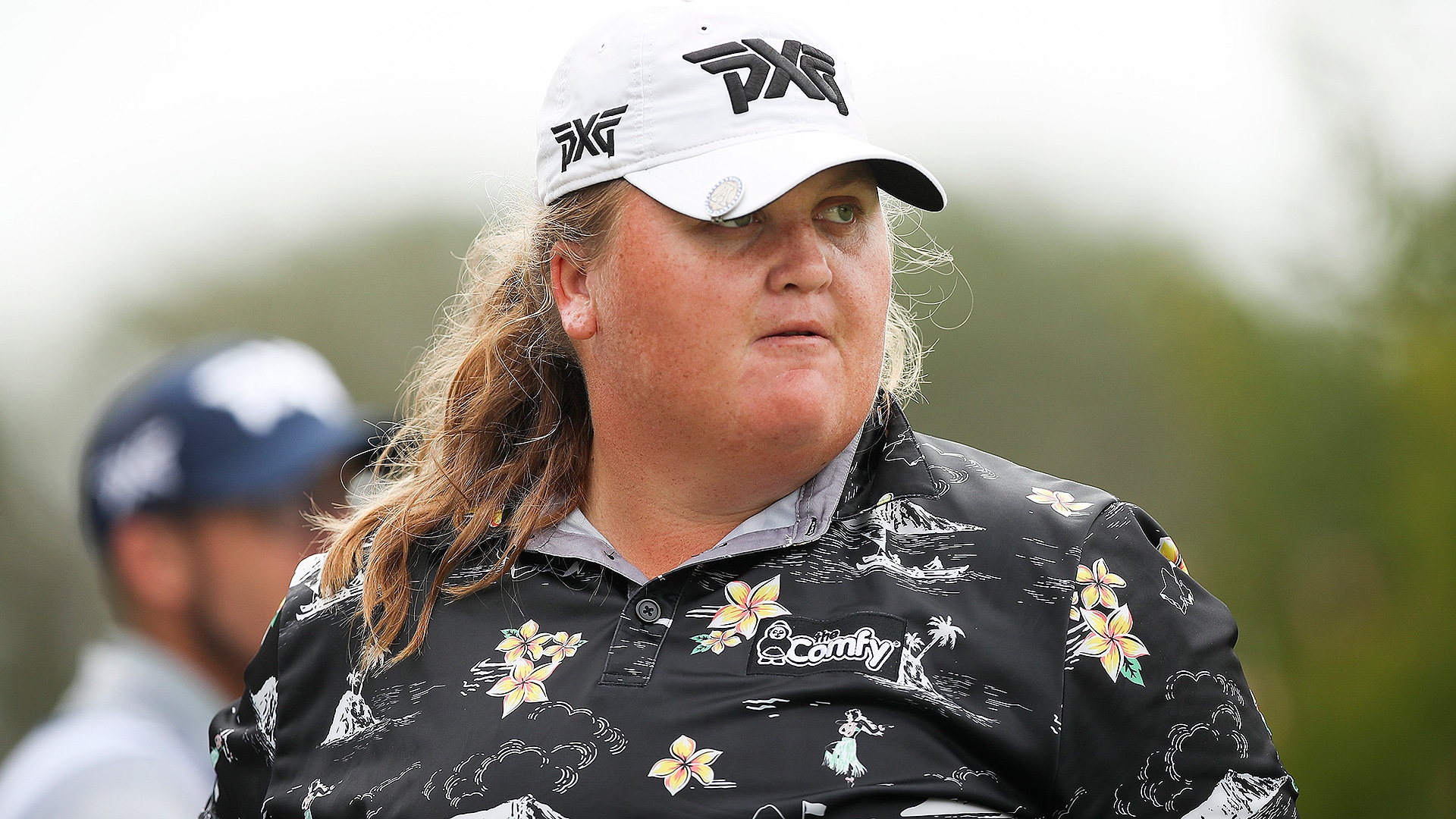 Haley Moore might be the only LPGA member still sleeping in her childhood bedroom. When she’s not on the road, competing against the world’s best, she’s at home with her family in Escondido, California, dozing in the same bedroom with the English garden theme, the one with the sky-blue walls adorned with hand-painted flowers and a white-picket fence, the one with a framed collage of her appearance at the 2006 U.S. Junior Worlds inscribed with the words “Believe”, “Dream” and “Achieve” – a mantra that fueled her at age 7 and now, 15 years later, serves as the tagline for her eponymous foundation.

Moore, 22, has lived at home since graduating from the University of Arizona in May 2019. It’s a setup that, in the midst of a global pandemic, has proven both convenient and comfortable – and considering her precarious playing status, is plenty practical, too. “Haley’s talked about relocating to Arizona again,” said her mom, Michele, “but she’s got to win a few before she can do that.”

Much of Moore’s career has been filled with challenges and complications, so why would her rookie season on the LPGA be any different? She was in Phoenix in spring 2020, preparing for the Founders Cup, when the LPGA halted its season because of COVID-19. Upon hearing the news, her eyes welled with tears. During the tour’s West Coast swing she was due to have dozens of friends, family and supporters come out to watch her play, to see how far she’d come, and now her splashy showcase was being derailed after just a single start. 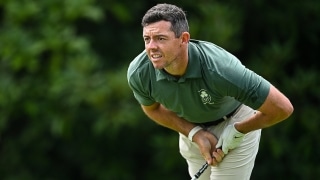 'From jail!' McIlroy hooks it around trees and onto green

Rory McIlroy saved par on the 11th hole Saturday at the Olympics after hitting an impressive approach around the trees.

Few newcomers in recent memory have been more recognizable than Moore, an intimidating presence at 6 feet tall but who has been affectionately referred to as a “gentle giant.” She first turned heads at the 2015 ANA Inspiration, where she made the cut as a 16-year-old amateur. A few years later, she starred on a plucky Arizona squad that reached the finals of the 2018 NCAA Championship; Moore sank a 4-foot birdie putt to deliver the Wildcats their first national title in nearly two decades. Mobbed on the green by her teammates, the euphoric scene sharply contrasted with her days as a tormented teenager, when she was an outcast, cruelly mocked for her size and social skills. The hero at last, that moment in the spotlight gave Moore the confidence to publicly share her harrowing backstory. Soon, she enjoyed an even bigger platform: She qualified for the LPGA in her first attempt, in fall 2019.

“Sometimes I’ll think back to nationals and wonder: What if she didn’t sink that putt? What if she didn’t talk?” Michele said. “I’m sure she’d probably still have gone on to Q-School and gotten her card, but would she just be another person of the hundreds that are on the LPGA?”

But Moore’s openness created unique opportunities: Sponsors like PXG and Comfy and Kinona came calling. She was prominently featured in the LPGA’s “Drive On” campaign. She started her own non-profit foundation, even creating a spotlight series called “Haley’s Heroes,” a collection of everyday people who, like their namesake, can serve as inspiration. All of the content centers around anti-bullying: THIS CAN NEVER HAPPEN AGAIN, declares her website mission statement. Once afraid to speak up, she now partners with a brand that uses the hashtag #ComfyInHerOwnSkin.

“I feel passionately about it, and it’s something that’s still happening today,” Moore said. “I want to tell my story and what I did to overcome it. I don’t want people to hide from it.”

Nor does she shy away from the cold reality – that her potential impact is tied mostly to her performance, and she’s produced inconsistent results over these two stop-and-start seasons. Because of her low-priority rookie status, she’d played only one LPGA event when the sport shut down in March 2020. The news rocked her. “I’ll never forget the look on her face,” Michele said, “but I just said, ‘Look, it’s a different time, and you have to go with the flow. We’re going to have to adapt.’” Having just bought a week’s worth of food for their Airbnb, the Moores packed up coolers and drove the six hours back home to Southern California, into an uncertain future.

Wanting to stay active with the state under strict COVID restrictions, Moore splurged on a Peloton, starting slowly and then ramping up with a goal this year to ride 2,021 miles. (At the Gainbridge LPGA, she stayed with a member of the group’s XXL Tribe.) When this reporter phoned recently, she had just returned from a 7 a.m. core workout at 24 Hour Fitness. She has limited sweets and carbs through the Optavia diet, learned to stomach cauliflower rice and even dabbled with the George Foreman Grill. In all, she has dropped about 35 pounds and never felt better.

Her game required constant maintenance too – more than just stroking putts on the bumpy artificial green on her family’s back deck. With area courses closed, Haley’s father, Tom, built a makeshift hitting bay with PVC pipe, an old mat and a net purchased off eBay. “Our neighbors saw us hitting balls like, Oh, hello – this is my homemade golf course,” Haley laughed. 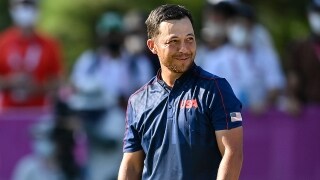 Xander Schauffele needed to par the final hole to win Olympic gold and that's just what he did, with a brilliant up and down.

When the Cactus Tour in Arizona announced plans for a full schedule, Moore jumped at the opportunity to stay competitively sharp. She wound up playing in a dozen events last summer, winning three of them, including back-to-back titles in July (the latter with a closing 62 to win by nine) heading into the LPGA restart. “I knew I was going to be one of the hot ones coming in there,” Moore said, but success didn’t come as quickly. She finished outside the top 50 in each of her first three LPGA events, banking less than $13,000, and then closed out a turbulent year with six missed cuts in eight starts.

At times she questioned whether she belonged, whether she’d qualified for the tour too quickly, whether she’d skipped a necessary step in her development. After all, Moore didn’t have the rigid structure or support system of the tour’s elite; she bounced around local courses to practice and didn’t keep a formal swing coach. Hiring a “team” was too expensive.

“You wonder a little bit what’s going on,” she said. “You just wonder what you’re doing differently than these girls, and why they’re succeeding and I’m not. I had a feeling of maybe my game isn’t there yet and that I might need more experience and maybe I just got lucky at Q-School. But I told myself: You had a great amateur career, a great college career. You know your game is there. Bad golf happens, and you don’t have to have your life depend on it. You got here for a reason, so just stay patient.”

At least she didn’t have to worry about having a place to play this year – the LPGA extended eligibility for another season, essentially granting rookies a free year to get settled amid unprecedented circumstances. But there was little normalcy about today’s tour with all of the protocols. Typically, the LPGA forms rookie pods, pairing a couple of first-timers with a seasoned veteran. Every few weeks they’d meet off-site and chat about tour life to help ease the transition. That obviously hasn’t happened over the past year as players stayed in their own bubbles, leaving someone like Moore, who craves human interaction and desperately wants to make new friends, to occasionally fend for herself.

Moore decides whether she wants to travel by herself, and her mom has gone to about half of her starts after scouring Booking.com for deals. At night they’ll eat dinner together and unwind with reality shows like “OutDaughtered” and “90 Day Fiancé.” It’s merely an extension of their home life, just with career-changing stakes each week.

“Living on your own and being on your own is great to do in your life, but I did get lonely not having them there,” Haley said. “If was on my own, I feel like I’d get lonely. So I’m totally fine with it. My parents are very supportive and want me to succeed.”

Still, those close to her have noticed a slight but significant growth in her maturity. She’s slowly gaining more independence: flying alone to events, schmoozing with sponsors, talking through caddie issues. A few times Michele has heard her only daughter complain, “Mom, I’m not a baby anymore!” and it always brings a small measure of relief. Over the years she has felt helpless, aching and fearing for her bullied child, wondering how she coped with the abuse, knowing the taunts cut deep. Now she beams with pride. She calls Haley the strongest woman she knows.

“I definitely think Haley has grown up tremendously. She’s had to,” said Laura Ianello, Moore’s coach at Arizona. “This is the LPGA – it’s not amateur golf anymore. It’s their livelihood, and they’re out for blood.”

Moore burns to be great too, but she talks less about how many trophies she wants to hoist and more about the impact she can – and will – make by being on tour. How she wants to host youth clinics. How she can’t wait for pro-ams so she can network and share her story and grow her foundation. How she wants to interact with fans – and not just by liking their Instagram comments or returning their heartfelt letters or waving to them as they watch from their backyards.

But for now, intermediate steps: Qualifying for the U.S. Women's Open. Locking up status for another year. Getting more comfortable. And maybe, just maybe, branching off on her own someday.

Then she paused, able to offer a perspective she lacked a few years ago.

LPGA rookie Haley Moore shares a first-person account of what it's like being bullied and how she's fought for success.