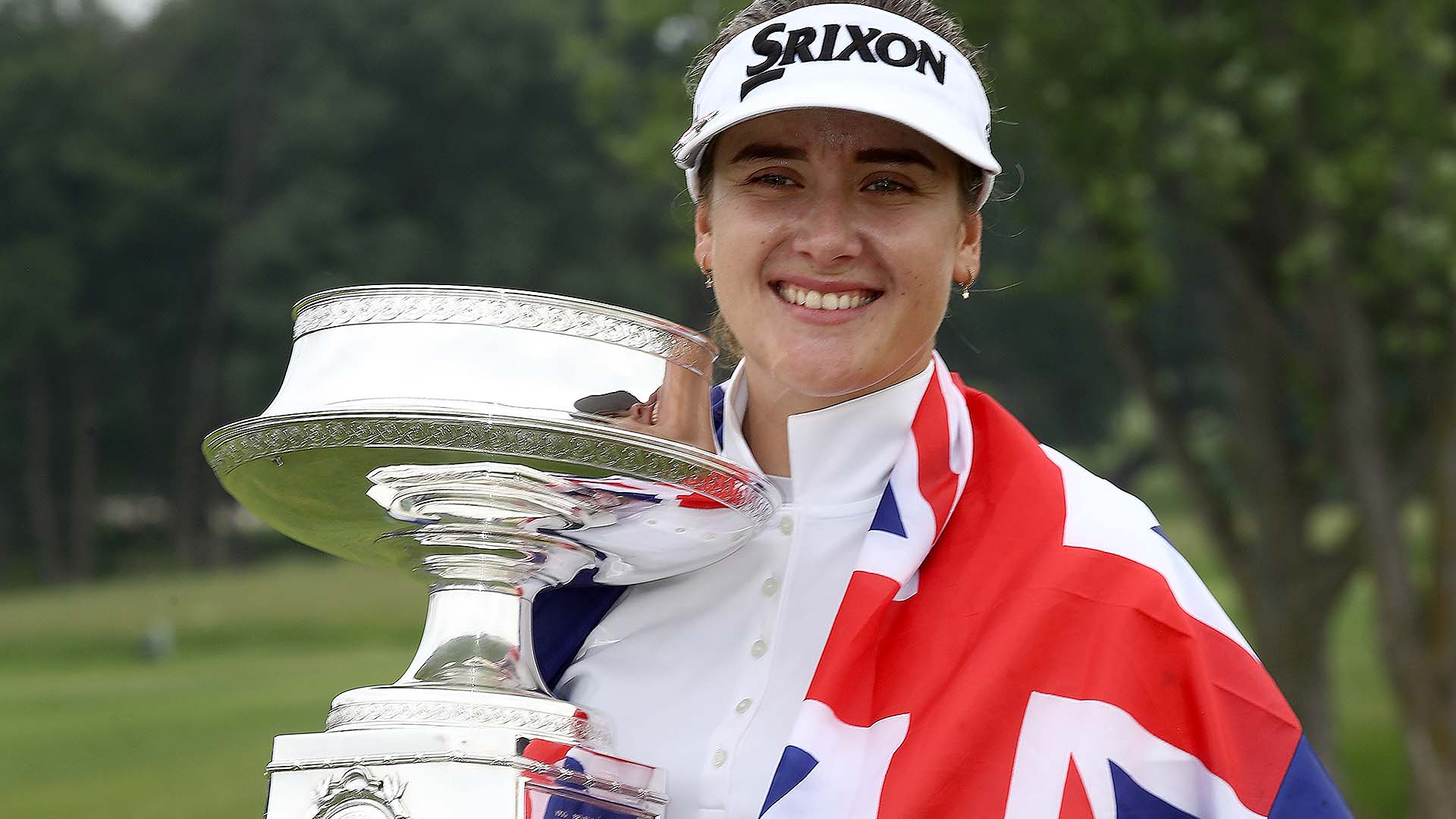 CHASKA, Minn. - Hannah Green held her nerve and saved par from the bunker with a 5-foot putt on the final hole to win the KPMG Women's PGA Championship on Sunday for her first major championship, and the first by an Australian in 13 years.

Green closed with an even-par 72 at Hazeltine for a one-shot victory over defending champion Sung Hyun Park, whose 18-foot birdie putt on the 18th hole gave her a 68 and put the pressure on the 22-year-old Australian.

Green pulled a 6-iron into the bunker, blasted out to 5 feet and made the biggest putt of her life.

Among those to celebrate with her was Australia's most prolific major champion, Karrie Webb, which was meaningful in many ways. Webb was the last Aussie to win an LPGA Tour major in 2006 at the Kraft Nabisco. She also supports junior girls in Australia, bringing two scholarship winners to America each year.

Green was one of those recipients four years ago.

"I'm speechless," she said through the tears. "I was really nervous playing the last five holes."

In only her second full year on the LPGA Tour, Green became the first wire-to-wire winner of this major since Yani Tseng in 2011. She also is the third player in the last five majors to make it her first LPGA Tour victory.

It was hard work, even though she never surrendered the lead on a cloudy day at Hazeltine with some light drops of rain at the end.

Green rolled in a 5-foot birdie putt on the par-5 seventh for a four-shot lead. With the group ahead still waiting to tee off, a 7-year-old girl handed her a blue sheet of paper - a poem she wrote to Green, who had given her a golf ball at the ANA Inspiration this year. Green read the poem and hugged the girl, Lily Kostner, and drilled another tee shot to birdie range.

But as she approached the turn, the nerves began to kick in.

She hit a poor lag putt from 45 feet on the ninth that led to a three-putt bogey. She missed an 8-foot birdie attempt at the 10th, a 5-foot par putt on the 11th and she came up woefully short on a standard chip from the collar of the rough short of the 12th. That was her third bogey in four holes, dropping her to 8 under.

Just like that, her lead was down to one shot, and suddenly a half-dozen players had a chance.

Nelly Korda was within one shot until a soft bogey on the par-5 15th. Park birdied that hole to get to 7 under, and Green couldn't afford any mistakes. It looked as if she had it wrapped up when she made a 15-foot birdie putt on the 16th, the signature hole at Hazeltine, followed by a par on the 17th.

Park wasn't finished, however, and she hit her tee shot so hard on the 18th that it went through the corner of the rough into the fairway, setting up a tidy approach to the back pin position and one last birdie.

Green answered her final challenge with the bunker save, and the celebration was on.

The two Karrie Webb Scholarship winners, draped in Australian flags, were on the green spraying Green with beer, along with a representative of Golf Australia and Green's boyfriend, Jarryd Fenton, who plays on the PGA Tour of Australasia.

"I always wanted to win in front of an Aussie crowd," Green said. "That's what it was like today. I'm over the moon."

Korda (71) and Reid tied for third, while Lizette Salas (72) and Danielle Kang (70) were four shots behind.

The surprise was Ariya Jutanugarn, who started the final round one shot behind on a course that measured nearly 6,800 yards, perfect for her power. Jutanugarn, a two-time major champion, failed to make a birdie and closed with a 77.

Green becomes the 11th player to win the last 11 majors on the LPGA Tour, a sign of growing parity.