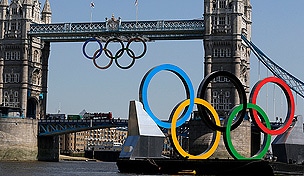 As the 2012 London Olympics get under way, Mercer Baggs, filling in for Golf Guy, and Bailey Mosier reflect on their most cherished Olympic memories in this edition of He Said/She Said.

Favorite athlete: Michael Johnson, four-time gold medalist. The man ran with a style stiffer than Ed Sullivan. He ran with golden shoes. He ran 200 meters in 19.32 seconds. He was amazing to watch and like all the legends, he was at his best when the pressure was most intense.

Favorite moment: Derek Redmond in the 400-meter semifinals in 1992. Redmond tore his hamstring during the race and tried to limp across the finish line. His father ran on the track and helped carry him the final 120 meters. It will bring tears to your eyes. Unless you're Bruce Jenner. I don't think he's capable of crying anymore.

Favorite event: 100-meter dash. Win this and you’re the fastest man in the world. That’s the coolest title you can have, aside from heavyweight champ.

Golf as an Olympic sport: Yes. Golf’s a global game, the Olympics welcome professionals and it will be more fun to watch than the standard PGA Tour fare.

Summer or Winter Olympics: Summer. I grew up in Georgia. I hate cold weather.

Favorite athlete: I marvel at Usain Bolt’s talents. At the 2008 Beijing Olympics, he broke the world and Olympic records in both the 100-meter and 200-meter events. He also set a 4×100-meter relay record with the Jamaican team, making him the first man to win three sprinting events at a single Olympics since Carl Lewis in 1984. Apparently, he's a pretty cool dude, too. When asked what his autobiography – set to release this year – contained, he said, 'You can't really give away anything in your book ... should be exciting, it's my life, and I'm a cool and exciting guy.'

Favorite moment: Kerri Strug wasn’t the star member of the 1996 U.S. Olympic gymnastics team. From the beginning she was overshadowed by Shannon Miller, Dominique Dawes and even 14-year-old Dominique Moceanu. But in the 11th hour, when the fate of the U.S. women’s gymnastics team was resting on her shoulders, er, ankle … Strug persevered and became a national hero and a legend. Strug helped the “Magnificent Seven” secure the gold medal for the first time in U.S. history. It gives me goosebumps every time I think of it.

Favorite event: Maybe it’s because I’m a girl, or maybe it’s because they're just awesome, but I love watching women’s gymnastics. From the tumbling in the floor routines to the bars and the vault, I admire their grace, strength and perfection.

Golf as an Olympic sport: Everyone else seems to be in on it, why shouldn’t golf join the party? Will be interested to see how it all unfolds with formatting and such, but I think golf will be a perfect addition to the games.

Summer Olympics or Winter Olympics: There's just something about the summertime that makes it the perfect Olympics setting. Call me a purist, but it seems to better align with the way the Greeks envisioned the games should be.