He won't be satisfied: Collin Morikawa's PGA triumph is merely the beginning 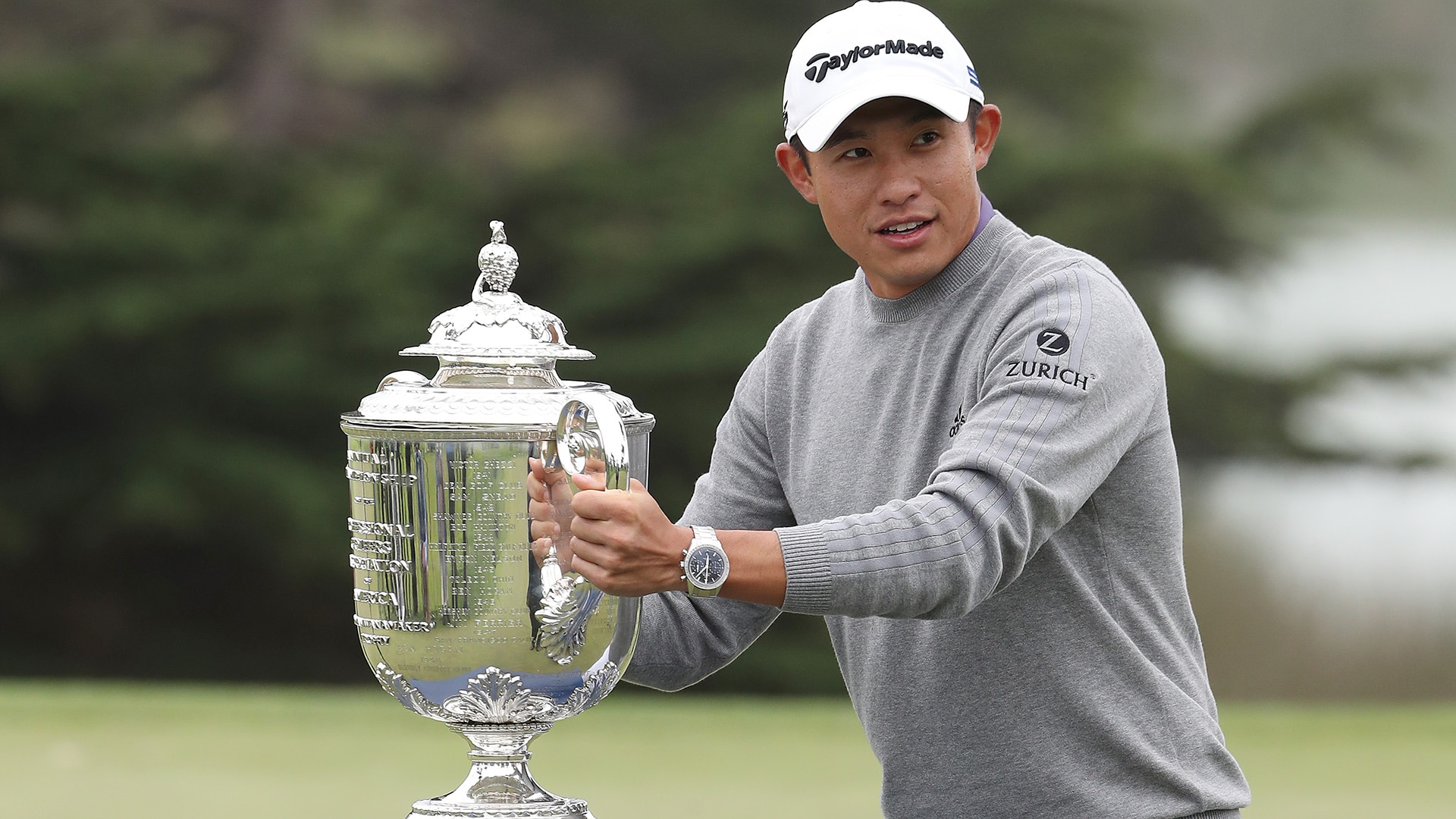 Any other year, in any other situation, Walter Chun would have driven the 60 miles from his home in San Ramon, California, to TPC Harding Park. College coaches are like parents, only wanting the best for their kids, and no doubt he would have been pacing behind the green as his former Cal superstar charged into the lead Sunday at the 102nd PGA Championship.

But these are exceptional times, and so for this fan-less major, the monumental moments unfolded on a flat-screen TV in Chun’s living room, and only after he’d wrested the remote away from his cartoon-obsessed daughter.

When Collin Morikawa chipped in for birdie on the 14th hole to take the lead for the first time, Chun shrieked so loud that it sent 5-year-old Lena scampering downstairs. There was a similar eruption about a half hour later, after the best swing of Morikawa’s young career and a tee shot that now will be etched in major-championship lore. And when it was over, when Morikawa won a whiplash-inducing PGA Championship and officially stamped himself as the game’s brightest young star, there was an audible release ("Holy cow") and a deeper sense of perspective in Chun's euphoric household. 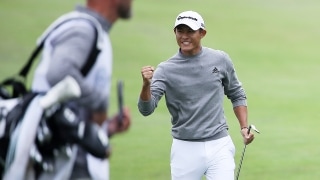 Collin Morikawa put together quite the finish Sunday – a chip-in birdie and eagle in his final five holes – to capture the PGA Championship.

“Collin has taught me not to underestimate anybody,” said Chun, who coached Morikawa at Cal from 2015-19. “In some ways, yeah, 15 months out of college and you’re a major winner, that’s crazy. But he’s taught me that the unbelievable can happen if you believe in yourself.”

Self-belief has never been in short supply for Morikawa. Despite playing one of the nation’s most demanding schedules, he finished inside the top 5 in nearly half of his college starts over four years. So pure was his ball-striking that a club-testing session showed his dispersion pattern with a 6-iron was as tight as most elite players’ with a pitching wedge. He won in his sixth pro start, went nearly a year without a missed cut and then overcame former world No. 1 Justin Thomas for another title at Muirfield Village. Fourteen months removed from graduation, Morikawa was ranked 12th in the world – one of the most rapid ascents of any player over the past decade.

“I’ve believed in myself since Day 1 that we can do this,” he said, “and I haven’t let up from that.”

There’s even less reason to waver now after surviving a frenetic afternoon in which seven players at one point held the lead at Harding Park. With a chip-in birdie and then an cold-blooded eagle on a drivable par 4 coming home, Morikawa became the third-youngest player since World War II to win the PGA, behind only Jack Nicklaus and Rory McIlroy. His only stumble all day was dropping the lid of the 27-pound Wanamaker during the socially distanced trophy presentation on the 18th green.

“I’m in awe still watching him play,” said his caddie, J.J. Jakovac. “All my caddie friends say the same thing: ‘I just cannot get over how mature your guy is. He’s like an old soul.’ He just knows what he needs to do. The confidence is a quiet confidence, but it’s super confidence, you know?”

Morikawa’s meteoric rise helped illustrate just how much the golf landscape (and the larger world) has changed since the sport last held a major 13 months ago. After all, it wasn’t just the heavy marine layer that gave this PGA an undeniably eerie feel. There were reminders everywhere that the world’s best golfers were still competing amid a raging pandemic. Masked players received temperature checks at the entrance. The PGA set up a socially distanced locker room in what was originally the merchandise area, even if many, in true muni spirit, opted to change shoes in the parking lot. There was a limited on-site presence, with tournament officials, volunteers and only about 50 credentialed media, seemingly all of them tagging along, face coverings on and cellphones up, for the star-studded groups.

For weeks, players have talked openly about the necessary adjustments of playing tournament golf without fans and in a vacuum. How their mind wanders. How they have to create their own adrenaline and momentum. It was a distinctly one-percent problem; only the superstars, used to playing in front of massive galleries, were truly affected by the soundtrack of silence. But that was considered the cost of doing business for the RBC Heritages and 3M Opens of the world. With no juice on-site, they wondered: Could a relative unknown just la-di-da his way into the gilded major club because the proceedings weren’t fraught with tension?

“It’s going to feel completely different than any one we’ve ever played,” Brooks Koepka said.

Speaking Saturday night after moving two shots off the lead in his attempt for a historic PGA three-peat, Koepka had scanned the leaderboard and sharpened his knife. And really, who could blame him? Since the beginning of 2017, he was 77 under par in the majors – a whopping 45 shots better than the next-best in that span. Of the top 20 players on the final-round leaderboard, Koepka owned more major titles (four) than the others combined (three). Some in the mix, like Morikawa, were talented but inexperienced. Others were one-and-done major winners, a group that included 54-hole leader Dustin Johnson, Koepka’s South Florida neighbor-turned-frenemy. Johnson has already punched his ticket to the Hall of Fame, but he’s been one of the game’s most confounding closers and the Tour leader in scar tissue. Though appearing carefree, his fragility shows up in his Sunday record: an 11-for-21 record when holding at least a share of the 54-hole lead, including 0-for-4 in the majors. No player in the game’s long history has blown his first four.

And so in separate interviews Saturday night, Koepka took the opportunity to remind Johnson of his failures, again and again. When asked whether the second major was more difficult to win than the first, Koepka fired this shot: “Well, if you look at the top of the leaderboard, I’d say yes.” The golf gods apparently didn’t appreciate his taunting. Koepka didn’t make a birdie until the 12th hole and closed with 74 – the second-worst score of the day – plummeting all the way into a tie for 29th.

At times, it seemed as though Koepka was the only player who didn’t have a chance to win Sunday. Nine different players held at least a share of the lead. Deep into the back nine, seven players were tied, setting the table for what would have been the largest playoff in history. The contenders ran the gamut, from the seasoned (Paul Casey, at age 43, trying to become the oldest first-time major winner since 1967) to the tortured (Tony Finau and his 163rd-ranked Sunday scoring average) to the transformed (Bryson DeChambeau, in his first major since overhauling his body and game).

Also among the co-leaders was Morikawa, playing just his second career major as a pro and roughly 20 miles from his old college campus. Arguably the most precise player on Tour, he’s shown a vulnerability on and around the greens. Poor putting cost him in some high-profile spots in college and amateur golf, as the three-time Hogan Award runner-up never took that final leap. “He’s got the talent,” said Chun, his college coach, “but he’s gone through some hardships on the course. He’s used them to grow as a player, and now he’s very mentally tough.” But that weakness reappeared when Morikawa missed a tiddler in a playoff during the Tour restart event at Colonial, and then he nearly was undone by another shortie that swirled into the cup at the Workday. Entering the week he ranked 164th in strokes gained: putting, Morikawa made a few setup adjustments last week and started feeling more reactionary to the target. The tweaks paid immediate dividends, as he tore up Harding Park’s smooth, flattish greens and led the field in putting, gaining more than eight shots on the field.

But it wasn’t Morikawa’s molten putter that will be remembered from his week. It’ll first be his chip shot on 14, after his 9-iron came up woefully short of the green. Standing over the ball he told himself that he was going to chip it in, and it rolled into the cup for a much-needed birdie that broke him out of the logjam at 10 under.

Then came the defining shot of the PGA, and easily the best of the year.

With the 16th hole set up for pyrotechnics in the final round, Morikawa grabbed driver on the short par 4. The tee shot was reminiscent of what he pulled off last month at the Workday, when Morikawa busted a drive through a narrow gap into Muirfield Village’s 14th green, the two-putt birdie propelling him on to victory.

“Hit it just like that one,” instructed Jakovac, and Morikawa uncorked a tee shot that was even better. With 278 yards to the front, 294 to the flag – perfect for his patented butter cut – Morikawa’s ball bled from left to right, taking dead aim at the front of the green.

“It looked like it was out of a video game,” said playing partner Cameron Champ.

While the ball was in the air, Morikawa and Jakovac screamed to get a good bounce and kick up onto the green. Even if a tree obstructed his view, Morikawa could tell by the smattering of applause that he had a putt for eagle. Walking up, he learned how close it was – 7 feet.

Morikawa buried the eagle putt to move two clear at 13 under, putting the tournament on ice. His bogey-free 64 matched the lowest final-round score by a PGA champion, and his closing 36-hole total of 129 was the best weekend for a major winner ever.

One by one, players headed into the flash area and praised Morikawa’s myriad gifts. Koepka called him a “hell of a player.” Champ said he “rarely misses a shot.” Finau declared that "he's not going anywhere anytime soon." Casey, who tied for second with Johnson, was even more pointed: “I don’t like the term ‘talent,’ but you know when somebody is good, and Collin was good. We could just tell. Those of us who knew, we knew that he’s the one. Even if the media weren’t talking about him, that’s where we were focusing our attention, and we weren’t wrong.”

The victory moved Morikawa to No. 5 in the world ranking, but there wasn’t any sense of a job completed. Not last summer, when he won for the first time. Not last month, when he edged Thomas for a second title. And not Sunday, when he outlasted the strongest field of any of the four majors. In college, Morikawa told Chun that he aspired to reach world No. 1 – that he wouldn’t stop until he got there – and he hasn’t given his old coach any reason to doubt him.

“He’s left an impression on all of us,” Chun said. “Seeing what he did, just down the street from me here, I’m speechless for him.” 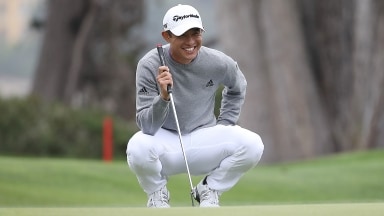 No autographs for Morikawa, but maybe a win

Collin Morikawa didn't get autographs at the Hero World Challenge at Sherwood, but he'd much rather have a Zozo win there.