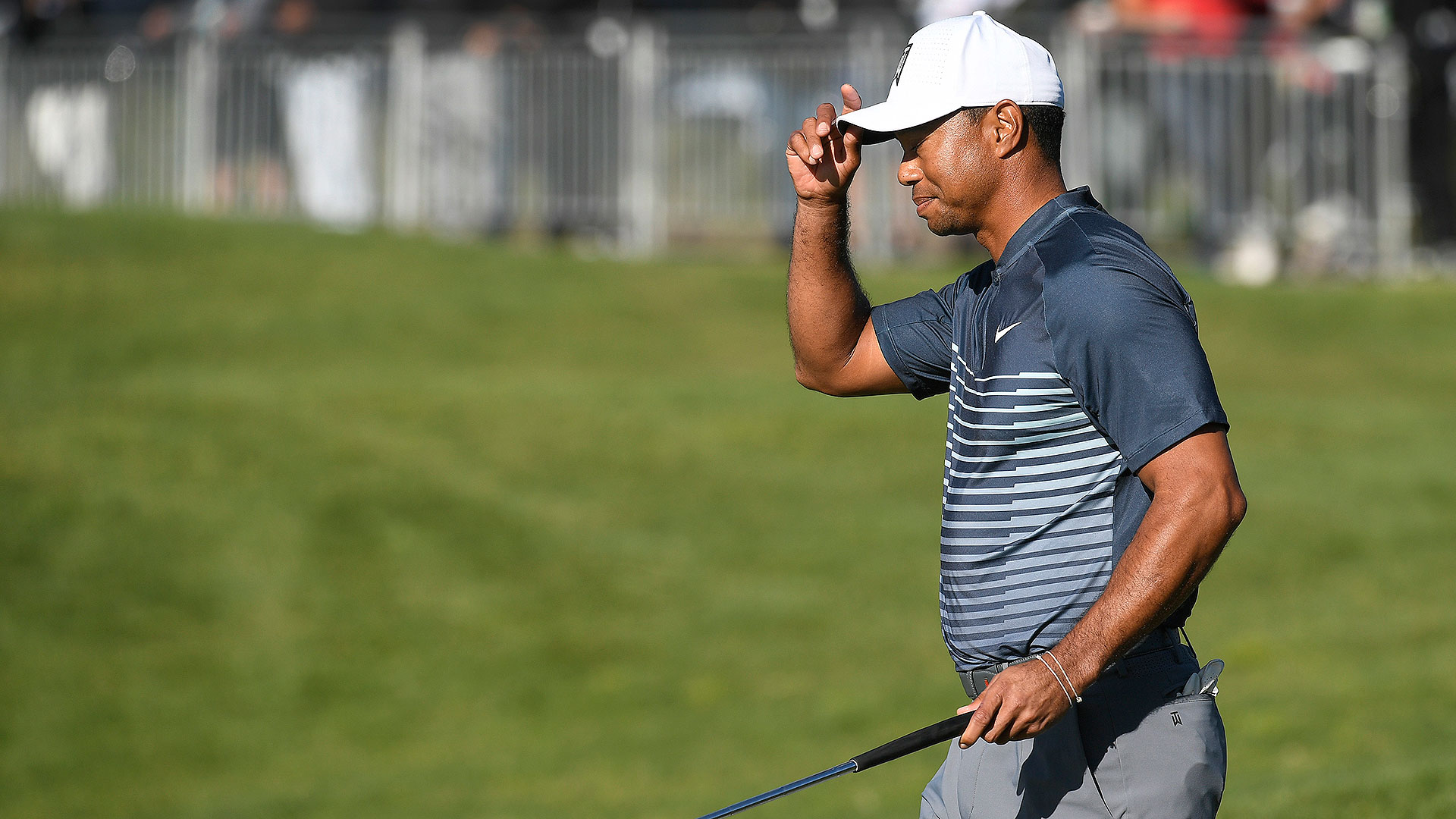 SAN DIEGO – There were almost as many narratives as there have been days of uncertainty leading up to Tiger Woods’ first start in an official PGA Tour event in nearly a year.

He would contend, he would dominate, he would struggle, he would survive. But after 36 eventful holes at the Farmers Insurance Open, there’s only one hot take that really matters – he remained upright.

It hasn’t been pretty. He’s been wild off the tee, painfully inconsistent with his iron play and not exactly vintage with his putter, although there were some signs of life on this front as a cool afternoon along the Pacific Ocean turned to dusk.

Woods called his second-round 71 on the North Course at Torrey Pines a "grind," which pretty much sums it up. But he did so standing tall, pain-free and pleased, regardless of those ridiculously unrealistic expectations.

He made the cut on the number, the byproduct of a gutty performance that shouldn’t be easily dismissed. There are all kinds of pressure in professional golf, whether you’re vying for your 15th major championship or your first made cut in an official event since 2015.

It was the latter that drove Woods on Friday.

Some 11 strokes off the lead when he made the turn and on the wrong side of the cut line, he converted a 45-foot birdie putt from off the green at the first hole (his 10th hole of the day), added another at the fifth hole and appeared to secure his weekend tee time with a 4-footer for birdie at No. 7.

But it wasn’t going to be that easy. It never is. Woods bogeyed the par-3 eighth and pushed his drive right of the final fairway, a familiar theme on Day 1.

Torrey Pines has been the sight of some of Tiger’s most clutch performances, with the 2008 U.S. Open being the standard in that category. His two-putt birdie from 75 feet at the last wasn’t for his ninth victory on the seaside layout, but it was important nonetheless.

“It's been a long 12 months. I've been away from it for a very long time,” he figured. “It's nice to get out there and compete and play. I'm still getting used to my feels, but that just takes more time under the fire.”

If playing 72 holes isn’t exactly the bar one might expect from a 14-time major champion, it’s a reality Woods seems comfortable with, at least at the moment.

The last time he played the weekend at an official PGA Tour event,  Justin Thomas - the reigning Player of the Year - was a rookie and Jon Rahm - who is poised to become the top-ranked player in the world with a victory this week - was still in college at Arizona State.

For Woods, this is every bit a marathon, and while others succumb to the urgency of now, he’s content with the scenic route - which, if his play through two days is any indication, is a wise choice. You know the deal, under-promise and over-deliver.

At his first hole, the 10th on the North Course, his opening effort was so far left he could have taken relief from the first fairway . . . on the South Course.

He went left at his second hole and again at his fourth, a wild swipe that settled into the Southern California flora and fauna and led to a double-bogey 6. All total, his tee shots found the short grass just three times and he wasn’t much better with his irons, hitting just half of his greens in regulation.

He explained he had the “flip-pulls” early and the “spinner” late, neither worked very well.

“It has not been happening, but under competition it's a little different story,” he said. “I need to get used to what my feels are and I haven't felt these things in a while.”

It’s been nearly five years, in fact, since Woods played for anything more important than a press with his buddies in South Florida; so it shouldn’t exactly prompt a double-take that after so much time outside of the competitive fray, it’s going to take a few rounds to rediscover that edge that made him the undisputed best of his generation.

“I still need more rounds under my belt,” said Woods, who saved his week thanks to a sublime short game that converted 7 of 9 scrambling attempts on Day 2. “How far certain shots are going, what my swing feels are going to be for certain shots, certain trajectories, those are all things a lot of these guys have already built in, they've been playing. I'm just starting out.”

For those who went all-in on this most recent return, may we suggest a more measured outlook. There was nothing in his play at the Hero World Challenge - a middle-of-the-pack showing at an unofficial event on what is essentially a home course - that suggested he was poised to pick up his pursuit of Jack Nicklaus’ record of 18 majors. And after two trips around Torrey Pines, that particular narrative remains unchanged.

What’s worth updating is that on a cold, breezy morning, a 42-year-old with a surgically repaired lower back went out and grinded his way to something worth being proud of.

Woods acknowledged on Wednesday that his plan is to build toward April and the Masters, and although his 1-under total may not inspire unmitigated confidence, it does put him 36 holes closer to that goal.