Hole-by-hole recap: Woods/Manning hold on for 1-up victory at Match II 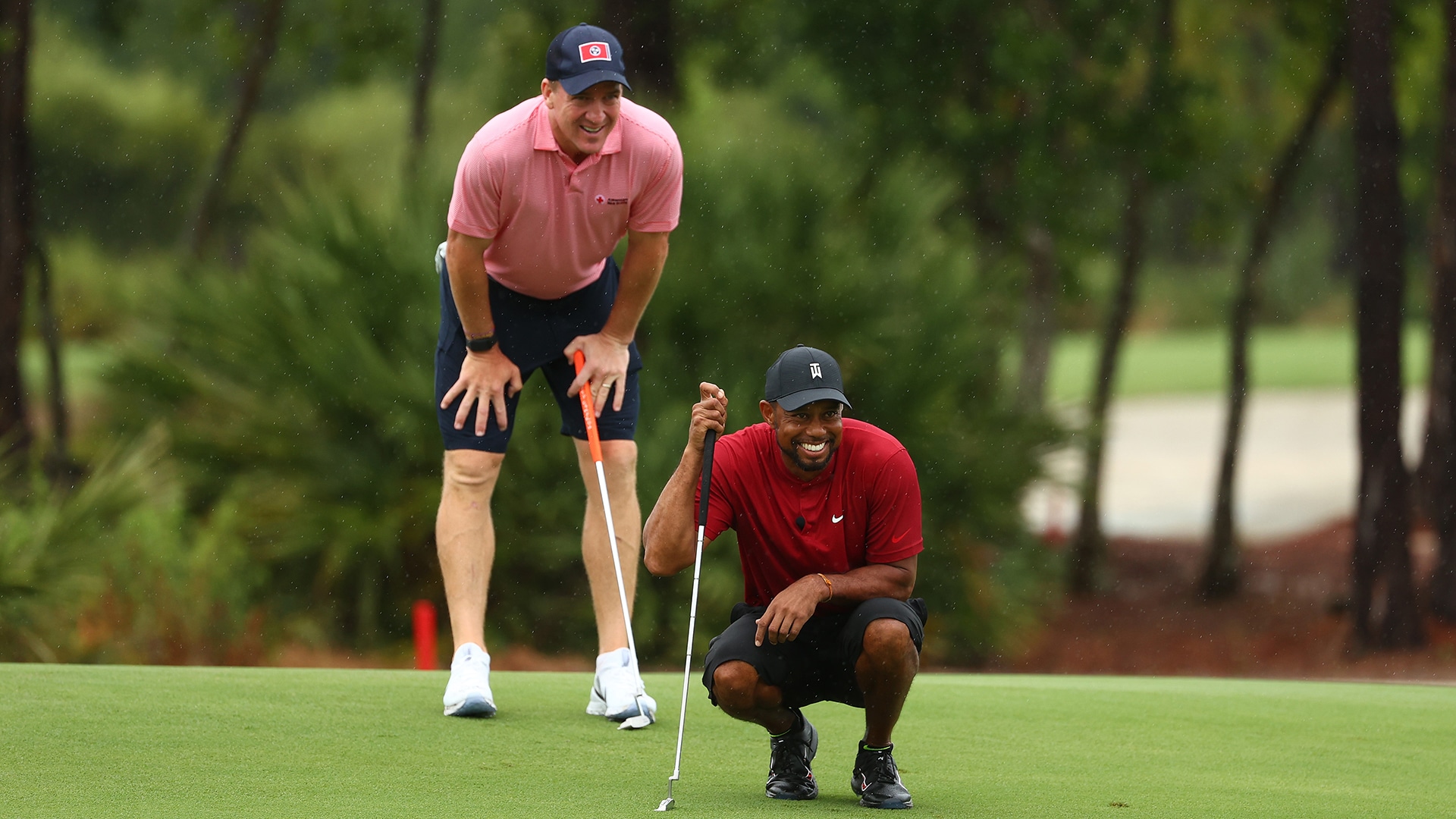 Tiger Woods and Phil Mickelson held off a late charge by Phil Mickelson and Tom Brady to win The Match: Champions for Charity on Sunday at Medalist Golf Club in Hobe Sound, Florida.

Woods and Manning built a 3-up lead after nine holes of best ball, but Brady, who had the highlight of the match with a hole-out birdie at the par-5 seventh, and Mickelson clawed back in modified alternate shot to 1 down with four holes to play.

But in the end, Woods and Manning closed out the 1-up victory on the final hole. Here is a hole-by-hole recap of how it all unfolded:

Mickelson and Brady choose to use Mickelson's ball, and it's a tough shot for Brady with water right of the green. That's been his miss today. Brady is dry, but he hits it heavy and short of the green. Manning also is tasked with an approach shot and finds the front left part of the green, about 30 feet from the hole. After a Mickelson chip, Woods lags it to a few inches to clinch the victory.

The first three drives find the short stuff, but Manning's blocks one into the trees. After a couple of lay ups, Woods and Mickelson give their quarterbacks birdie looks from around 25 feet. They both miss, and Woods and Manning will head to the last leading 1 up.

Match status: Woods/Manning lead, 1 up thru 17

After Russell Wilson pledges $100,000 for every tee ball inside of 12 feet, Mickelson and Brady hit tee balls inside of that number. Manning adds a third, his settling just a few feet away. Woods is the only one who is easy on Wilson's wallet, as he hits it to 25 feet.

Mickelson needs to make his birdie putt from 6 feet and he converts to halve the hole.

Match status: Woods/Manning lead, 1 up thru 16

Woods and Manning choose Manning's tee shot, and Woods finds the front of the green with long iron, about 20 feet away. Mickelson tugs his approach a bit, and Brady will be facing a 30-footer from the right edge of the green. Brady runs it 10 feet by, as Mickelson says, "That's all right." Manning's roll is much better, perfect speed and just a tad left. Mickelson saves his team by making the clutch comebacker. Halved.

Match status: Woods/Manning lead, 1 up thru 15

Another short par 4, but with the rain and wind, everyone goes with iron. Manning fans one right, so he'll have to hit the approach. He misses the green left of the left bunker after Mickelson sticks one to about 8 feet right of the flag. Woods bails Manning out with a deft pitch to a few feet, but after Brady misses the birdie putt, Manning doesn't convert the short par save. Mickelson and Brady get another back.

Match status: Woods/Manning lead, 1 up thru 14

Mickelson catches the left side of the fairway with his drive while Woods pipes another one. Brady is his usual out of play while Manning hits a beauty. He and Woods may be playing his tee ball for the first time. They do, and Woods cuts a 3-wood into the front right bunker. Not a good spot to leave an amateur, and Manning blades one over the green. It then starts pouring – like really pouring. They keep playing. Manning pushes an 8-footer for par past the hole. Mickelson misses, too. A wet halve.

Match status: Woods/Manning lead, 2 up thru 13

Mickelson and Woods give their partners about 10-foot looks at birdie. Brady and Manning miss, with Brady's roll lipping out hard. Halve with pars.

Match status: Woods/Manning lead, 2 up thru 12

Mickelson says to Brady, "If we can shoot even par on this back nine we'll have a chance." Lefty then steps up and drives the green, his ball landing 3 feet from the cup and settling about 20 feet away just off the back edge. "That is salty," Mickelson said.

It doesn't matter what Woods and Manning are up to because Brady sinks the eagle. "A 2! A 2! Yes, because that's how we roll!" Mickelson shouts in celebration.

Match status: Woods/Manning lead, 2 up thru 11

OK, now we're in modified alternate shot, where the teams will get to choose the best drive. We have a feeling it will mostly be the amateurs who are hitting second. On cue, Manning loses one right, but Woods bails him out. Mickelson also finds the fairway while Brady takes iron and safely hits one out there. Mickelson hits the approach and misses the green long and right. Manning goes for his team and lands it on the flag before it rolls just off the back, about 20 feet away. Brady Texas-wedges it to concession distance and Woods rolls it close for another halve.

Match status: Woods/Manning lead, 3 up thru 10

With Woods and Mickelson in the fairway, Manning is in the left bushes and Brady fans a 3-wood right into the marsh. Not good. Woods misses the green in the front-right bunker, but he recovers nicely by nearly holing his third. Mickelson misses the green just short but ends up with par, too. The hole is halved going into alternate shot.

Match status: Woods/Manning lead, 3 up thru 9

After his heroics on the last hole, Brady will get a shot on this hole, as will Manning. Brady misses the green left and will have a tough chip upcoming. Manning, meanwhile, gave himself a 12-foot look at a 2-for-1. Mickelson, after sticking his tee ball to 6 feet, is informed of the strokes the amateurs are getting. "Peyton gets a shot here? Are you kidding?" he said. Manning misses his birdie try but makes net birdies anyways. Mickelson sinks his putt to halve the hole.

Match status: Woods/Manning lead, 3 up thru 8

Woods finds another fairway while Mickelson and Brady are each in the sand, Mickelson a fairway bunker and Brady in the right waste. Woods is dancing in two and has an eagle putt upcoming. Mickelson hits a good one out of the bunker and shouts, "Baby, be the one!" However, his ball comes up 10 yards short of the green. Brady looks as if he's out of another hole, but he then holes a wedge for birdie. Wow! Spun it back into the hole, too. Brooks Koepka, who previously pledged a $100,000 donation if Brady made a par on the front, now has to pay up. (He later pledged another $100,000 if Brady pars again before the turn.)

Woods now needs to make his eagle and he almost does, his ball horseshoe-ing out of the cup. What an exciting halve.

Match status: Woods/Manning lead, 3 up thru 7

As Brady continues to search for his swing, Manning is actually carrying his weight. His net birdie wins the hole for he and Woods, who has yet to miss a fairway through six holes.

Match status: Woods/Manning lead, 3 up thru 6

OK, we've arrived at the one-club challenge. Woods going with 4-iron and finds the fairway. Mickelson chooses 6-iron and hooks it into the woods. "Not swinging it great right now," Mickelson said. Manning joins him in the trees. Brady? Well, he's in the water left and is seriously confused as to where to drop his ball. Woods with a good dig after Mickelson asks him to mark his ball as Mickelson prepares to hit his third shot. "Want me to mark it with one of my U.S. Open medals?" Woods asks, before lipping out his 6-footer for par. Brutal. Hole is halved with bogeys.

Match status: Woods/Manning lead, 2 up thru 5

Manning and Woods hit a couple of beauties onto the green while Brady is 50 yards right – even after a challenge from Charles Barkley. Mickelson misses the green right. Manning then steps up and pours in a 20-footer for birdie.

Match status: Woods/Manning lead, 2 up thru 4

Mickelson gets ready to hit a bomb for the long-drive contest here. "I already have the coffee, I just need to activate the calves and step on one. This one's for you Workday," he said. Mickelson then blew one well left into the trees. Woods finds the fairway and wins the $1.5 million prize for his charity. Brady slices another one into the woods and has to re-tee, so he's out again, even with a stroke.

Manning is in the bushes, too. This isn't good for the amateurs so far. Woods' second shot runs through the fairway, as does Mickelson's third after laying up out of the trees. Mickelson and Manning need to get up and down for their pars (Manning's net par) while Woods can win the hole with an up-and-down birdie. And he does with a conceded birdie after Mickelson misses his par putt.

Match status: Woods/Manning lead, 1 up thru 3

Mickelson and Woods find the second fairway from what looks like one of the smallest tee boxes in America. Up ahead, Manning and Brady join them, but Brady hits his second out of play and is quickly out of another hole. Manning hits a nice shot onto the left edge of the green while Woods will also have a look at birdie. Mickelson misses the green long and right, but after a detailed shot explanation, converts a nice chip and completes the up-and-down par. Manning misses, and so does Woods, with Woods saying to himself, "Oh, Tiger, hit the damn thing." Another hole halved with pars after Mickelson gives a delayed concession.

Match status: All square thru 2

After nearly an hour rain delay, the match is underway – and with some Samuel L. Jackson introductions. Manning and Brady hit awful drives – Manning found the palmetto bushes and had to drop – and they are quickly out of the hole.

Mickelson missed the fairway well left but snuck a cut shot onto the front of the green. Woods, from the fairway, barely caught the right side of the green. A pair of two-putts by the pros and the first hole – a sloppy one at best – is halved. "Let's go frickin' play now," Woods says as he walks off the green.

Match status: All square thru 1