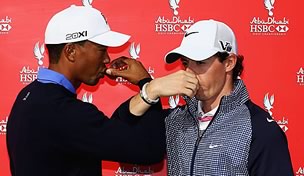 The new Nike ad is cute, and others to follow no doubt will entertain, but watching Tiger Woods and Rory McIlroy do their buddy cop routine for the next five years doesn’t really interest me. There was something sporting about the good old days when Tiger appeared to hold a bit of disdain for Phil Mickelson, Vijay Singh and Sergio Garcia.

• Tim Rosaforte detailed Russell Henley’s stellar basketball career in Georgia. For what it’s worth, Jack Nicklaus was a high school hoops standout in Ohio in the 1950s. In fact, the Bear played recreation-league ball until he was almost 40. These days, parents and coaches point their kids to one sport at a young age and have them focus squarely on that. Jack always felt playing other sports sharpened his competitive instincts.

• President Clinton’s gift is his ability to move seamlessly through different environments. Sunday he took the stage in mostly liberal Hollywood at the Golden Globes. The remainder of the week, in La Quinta, he’ll command the mostly conservative world of golf. He told me last year he understood why the majority of golfers are Republicans. Taxes were the obvious reason, and without going into great detail, he thought some consideration should perhaps be given to athletes who make windfall sums in short periods of time.

• I’d love it if just once an athlete said: “I made the move in part because the money was just too good to pass up.”

• I like the U.S. Golf Association’s nod to career amateurs in the Walker Cup. And I like this year’s venue, National Golf Links on Long Island.

• Recently took the golfing trip of a lifetime and didn’t hit a single shot. I toured the Latrobe warehouse where Arnold Palmer keeps a lot of his memorabilia. Arnold was my guide. Among my favorite items was a pair of skis that Olympic cutup Eddie the Eagle sent to Arnold, as well as a pool cue from Jackie Gleason. The story airs in March.

• Roger Maltbie tells a great story about Jack. At the 1975 PGA Championship at Firestone, Roger was paired with Jack. Keep in mind it was only the first round. Rog pointed to a leaderboard and said, “Jack, look at that, Ed Dougherty’s at 6 under, wow.” Jack replied, “Five under wins.” Guess what number won? Guess who shot it? You got it, Jack at 5 under. The truly great ones know.

• Johnny Miller recalls giving President Clinton a lesson in the oval office and playing a round of golf with him. Johnny says that despite a flying right elbow, years ago the former President hit it as far as an average Tour pro. But not as straight, not nearly as straight.

• Web.com Tour, Hooters Tour, Gateway Tour, Asian Tour, collegiate golf and that’s a short list. There are simply more places now for players to cut their teeth in 72-hole tournaments, to learn the art and science of putting four rounds together. So, when they arrive on the PGA Tour, while the lights are brighter and the competition deeper, it’s still just you and 72 holes. More guys with more places to play using more advanced equipment are capable of posting winning72-hole scores.

• Of free-wheeling Johnson’s ability to shake off a setback, his agent David Winkle likes to say, “He was dipped in Teflon at birth.”

• Question to you old-school graduates: Does Matt Kuchar have just a little George Archer in him?

• Colin Montgomerie and Tom Watson would be an all you can eat media feast, but Paul McGinley is the right choice for Europe and it could work to their advantage. In stature, he’s the decided underdog, and Europe’s always found a way to play that card and play it very, very well. Plus he’s bright, organized and tough.

• By only a late field goal, Henley was the best rookie named Russell this past weekend.

• Mickelson has two wins since turning 40 in June of 2010. With 40 wins at age 42, Phil needs a strong season if he hopes to make a real move at his goal of 50 career victories. Stricker’s about to turn 46 and he’s won nine in his 40s, while Vijay is the standard bearer with 22.

• Nike’s had a run of bad luck and bad picks in recent years with Tiger, Lucas Glover, Paul Casey, Stewart Cink and Anthony Kim. Now with all their considerable money muscle and marketing muscle, they’ve cleared the slate with Rory. Say this for the kid: now that he’s with Nike, he’ll never want for courtside seats.