How will players game-plan for Carnoustie? 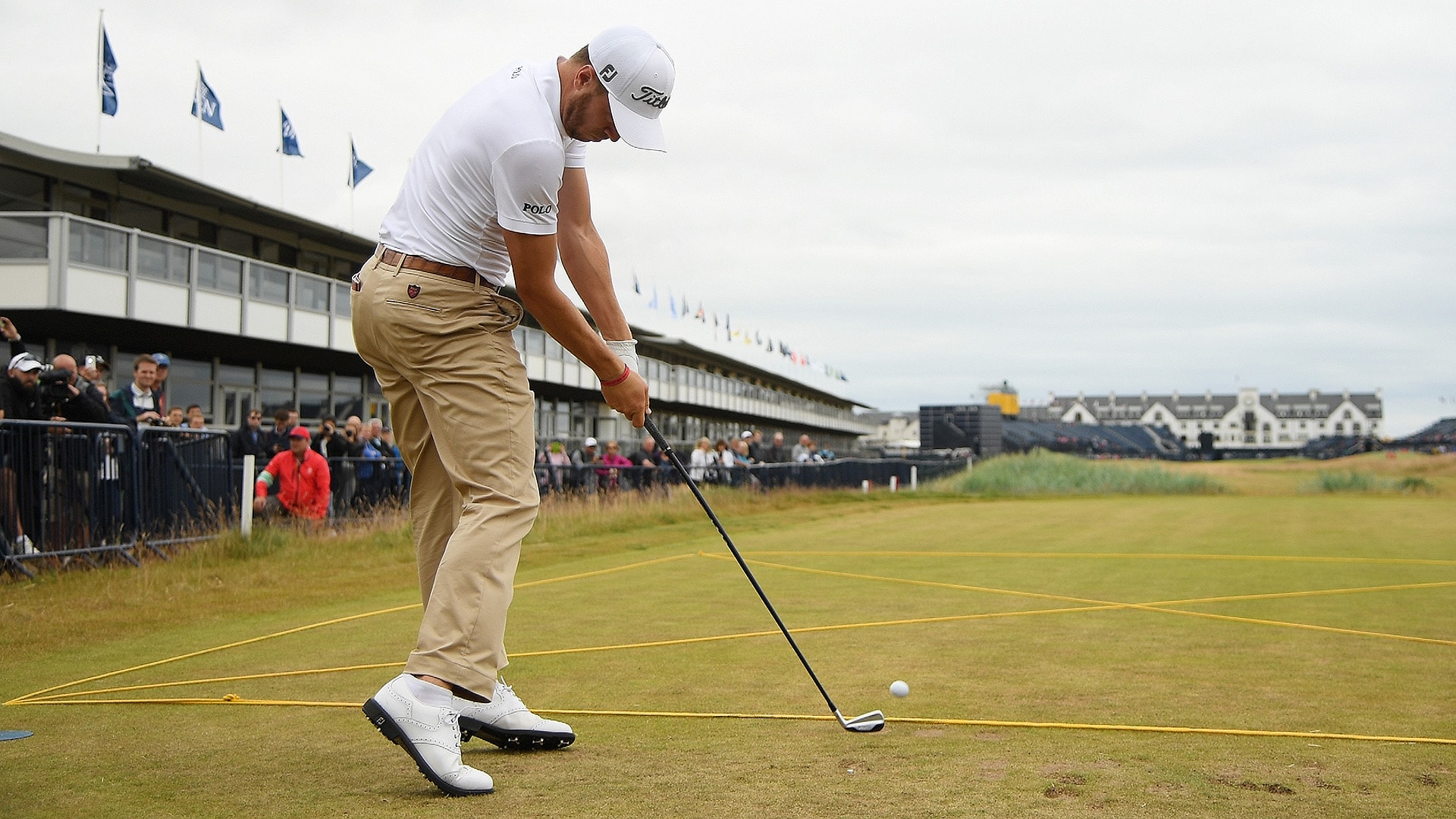 CARNOUSTIE, Scotland – Justin Thomas took a familiar slash with his driver on the 18th tee on Monday at Carnoustie and watched anxiously as his golf ball bounced and bounded down the fairway.

Unlike the two previous editions of The Open, at what is widely considered the rota’s most demanding test, a particularly warm and dry summer has left Carnoustie a parched shade of yellow and players like Thomas searching for answers.

Under the best circumstances, Carnoustie is every bit the unforgiving participant. But this week promises to be something altogether different, with players already dumbfounded by how far the ball is chasing down fairways and over greens.

But then it’s also proving to be something of a unique test.

Where most practice rounds at The Open are spent trying to figure out what lines are best off tees, this is more a study of lesser evils.

Tee shots, like at the par-4 17th hole, ask multiple questions with few answers. On his first attempt, Thomas hit 2-iron off the tee at No. 17. It cleared the Barry Burn and bounded down the middle of the fairway. Perfect, right? Not this year at Carnoustie, as Thomas’ tee shot kept rolling until it reached the same burn, which twists and turns through both the 17th and 18th fairways, at a farther intersection.

“A hole like 17 in this wind, the trick is getting a club that will carry [the burn],” said Thomas, who played 18 holes on Monday with Tiger Woods. “If that hole gets downwind you can have a hard time carrying the burn and keeping it short of the other burn. It’s pretty bizarre.”

The sixth hole can offer a similar dilemma, with players needing to carry their tee shots 275 yards to avoid a pair of pot bunkers down the right side of the fairway. Yet just 26 yards past those pitfalls looms a second set of bunkers. Even for the game’s best, trying to weave a fairway wood or long-iron into a 26-yard window can be challenging.

“Six is a really hard hole, it really just depends on how you want to play it. If you want to take everything on and have a chance of hitting an iron into a par 5, or just kind of lay back and play it as a three-shot hole,” Thomas shrugged.

It’s difficult to quantify precisely how short the 7,400-yard layout is playing. It’s not so far players are flying the ball in the air, particularly with relatively little wind in the forecast the rest of the week, so much as it is a question of how a particular shot will run out after it’s made contact with the firm turf.

As the field began to get their first taste of the bouncy fun, one of the earliest indications something was askew came on Sunday when Padraig Harrington, who won The Open the last time it was played at Carnoustie in 2007, announced to the social world that he’d hit into the burn on the 18th hole.

“This time it was the one at the green, 457 yards away,” the Irishman tweeted. “The fairways are a tad fast.”

Most players have already resigned themselves to a steady diet of mid-irons off tees this week in an attempt to at least partially control the amount of run-out each shot will have.

Jordan Spieth, the defending champion, hadn’t played a practice round prior to his media session, but could tell what’s in store just from his abbreviated range session on Monday. “Extremely baked out,” he said.

The conditions have already led Spieth and his caddie, Micheal Greller, to conjure up a tentative game plan.

“You might wear out your 5- and 4-irons off the tee instead of hitting 3- or 2-irons like you’re used to,” Greller told him.

But even that might not be the answer, as Tommy Fleetwood discovered on Sunday during a practice round. Fleetwood has a unique connection with Carnoustie having shot the course record (63) during last year’s Dunhill Links Championship.

The Englishman doesn’t expect his record to be in danger this week.

In fact, he explained the dramatically different conditions were evident on the third hole on Sunday.

“There’s holes that have been nothing tee shots, like the third. If you play that in the middle of September or October [when the Dunhill is played] and it’s green and soft, you could just hit a mid-iron down the fairway and knock it on with a wedge,” Fleetwood said. “Yesterday it was playing so firm, the fairways really undulate and you have bunkers on either side, it’s actually all of a sudden a tough tee shot.”

The alternative to the iron game plan off the tee would be to simply hit driver, an option at least one long-hitter is considering this week if his practice round was any indication.

On Sunday, Jon Rahm played aggressively off each tee, taking the ubiquitous fairway bunkers out of play but at the same time tempting fate with each fairway ringed by fescue rough, which is relatively tame given the dry conditions. But even that option has consequences.

“It’s kind of strange where there’s not really a number that you know you’re going to be short,” said Fleetwood, who played his Sunday practice round with Rahm. “[Rahm] hit a drive on 15 that was like 400 yards. You just can’t account for that kind of stuff.”

Whatever tactic players choose, this Open Championship promises to be a much different test than what players have become accustomed to at Carnoustie.