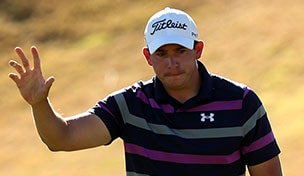 LA QUINTA, Calif. – The West Coast swing hasn’t been kind to Scott Stallings throughout his young career, though his five-shot lead here at the Humana Challenge figures to change that.

Last year, at this very tournament, he tore cartilage in five of his ribs, a freak injury – “a comedy of errors,” he says – that nearly cost him his entire season.

Stallings was undergoing treatment in the physiotherapy trailer here when the injury occurred. “It was a good attempt to try to make a sore back feel better,” he said, “and it did not go well.”

Stallings woke up the next day and could barely swing. When he played the first round at La Quinta alongside Carl Pettersson, Stallings was in such excruciating pain that the big Swede told him, “Either you’re going to withdraw, or I’m going to withdraw. I can’t watch this anymore.”

A few weeks later, Stallings was playing in the pro-am at Riviera when he drove into thick, wet, juicy rough on No. 11. He slashed out, clutched his midsection, dropped to his knees. His caddie turned and walked off the course. They were done.

Well, for a few months, anyway. Stallings’ victory at the 2011 Greenbrier Classic exempted him into The Masters, and he wasn’t about to skip his Augusta debut, even against his doctor’s recommendation. Stallings told him flatly, “Man, even if you put me in a body cast, I’m going to play Augusta.” So he played his first Masters – and made the cut – while on the painkiller Celebrex.

“At the end of the day, it was worth it,” Stallings says now. “You never know if you’re ever going to get an opportunity to (drive) down Magnolia Lane again.”

Stallings says he never fully recovered from the injury until the Memorial, where he led after the first round and was pain-free. A month later, he won the True South Classic, the event played opposite the British Open.

Here in the California desert, Stallings pulled away from a group of relative unknowns with a 9-under 63 that included two eagles. Supreme ball-striking helps, of course, but he also credited his recent good form to his increased focus on fitness and nutrition, as well as his hiring of caddie Frank Williams – the veteran looper who was on Stewart Cink’s bag for 14 years, including during the 2009 British Open – whom Stallings described as having given him a “huge shot in the arm.”

Often overlooked in the best-player-under-30 discussion, Stallings is eyeing his third PGA Tour title in the past 19 months – the same number won by Tiger Woods, Webb Simpson and Dustin Johnson. The only player with more Tour wins during that span: world No. 1 Rory McIlroy. Stallings also would become the sixth 20something with at least three PGA Tour wins, joining Johnson, McIlroy, Simpson and Anthony Kim, though each of his titles would have come in second-tier events.

Asked if he feels underrated, Stallings, 27, shrugged, “I don’t really care about that. I know playing better helps a lot of things.”

He can’t play much better at PGA West. Staked to a five-shot lead over five players, and bogey-free through 54 holes, Stallings could become the first player to win a tournament without dropping a shot since 1974.

“I’ve just got to go do the same thing I’ve done the last three days,” Stallings said. “Be aggressive.”

A victory here is expected to move to Stallings to No. 51 in the Official World Ranking, making him a near-lock to be in the field for next month’s WGC-Match Play.

Stallings and his wife, Jen, are expecting their first child – a baby boy named Bradley Finn – a week earlier. The couple grappled with how to tell friends and family of their new addition, so Stallings told his bride that if he won in Mississippi in July, he would share the news. With everyone.

So there he was, on live television, informing the Golf Channel audience that he would soon become a father.

“She was more of a story than I was,” Stallings says, laughing, “but that’s the way it should be.”

Another victory Sunday would change that narrative, steal the spotlight. Until the baby comes, of course.