Mahan opens with win over Manassero in title defense 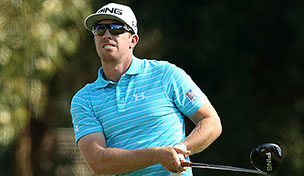 A few hours later, his road back to the finals looked a little bit easier.

Now, No. 4 Webb Simpson is the highest seed remaining in the Gary Player bracket, followed by fifth-seeded Peter Hanson and the sixth-seeded Mahan.

In the Round of 32 Mahan will face Sterne, a winner less than two weeks ago at the Joburg Open. They played each other in 2008, with Mahan prevailing, 4 and 3, in the opening round.

“You have to catch the match on the right day because you’re not going to play great every single day,” Mahan said. “You have to get lucky in these things. But I think you just have to have a good, strong mental outlook on things and realize this is a tournament – you don’t need to fix anything, you just need to keep playing and try to keep winning and grinding out.”