'I finally got one': Unflappable Dustin Johnson overcomes it all to win Masters 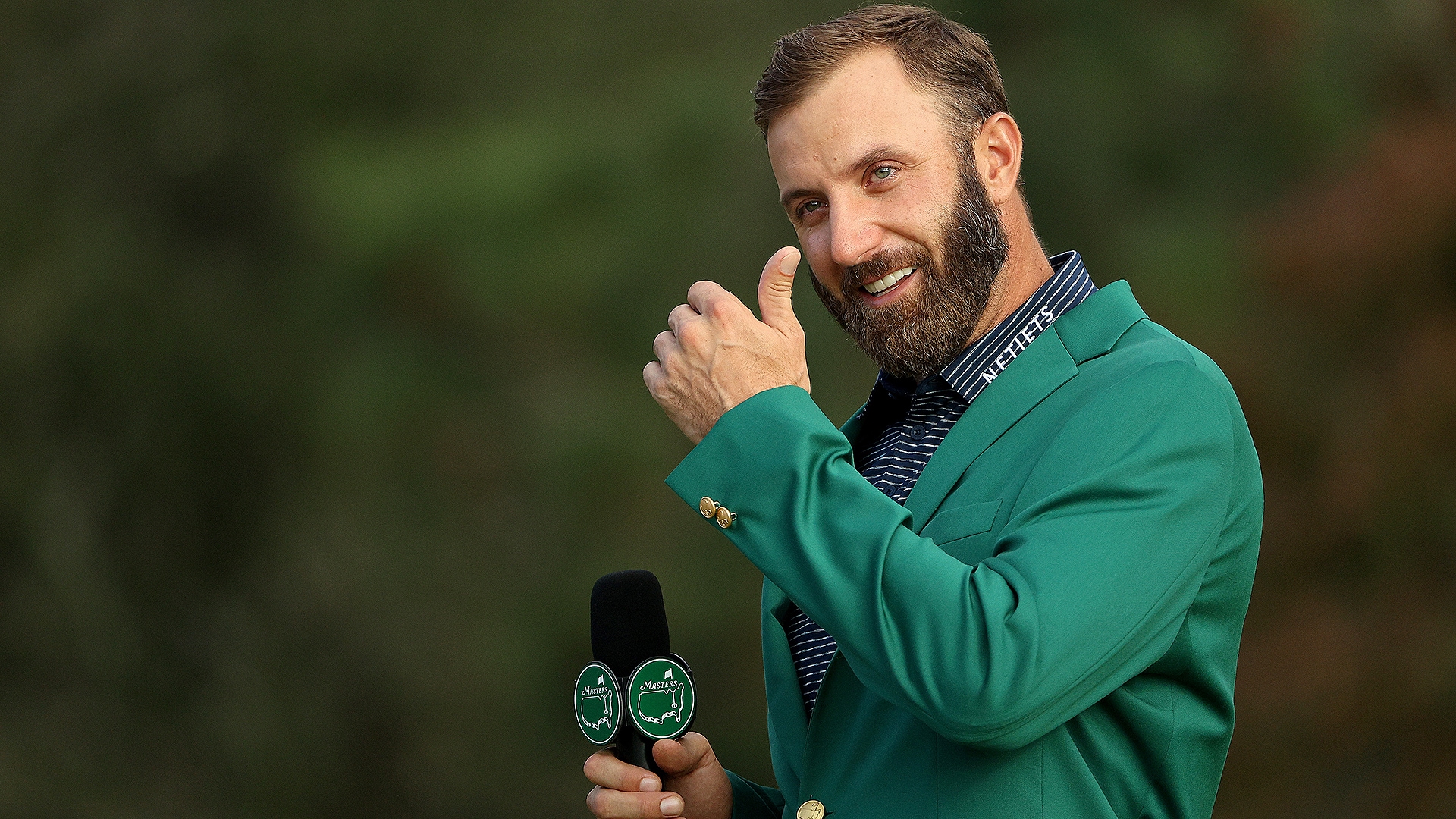 Agent David Winkle lurked in the shadows as he watched Johnson, then a senior at Coastal Carolina, drop a 320-yard missile into the green of a drivable par 4, about 15 feet away from the flag. Winkle rushed into the trees to call his boss, positively giddy about landing the can’t-miss star. Of all the spoils he saw in DJ’s future – millions of dollars in endorsements, dozens of victories, global acclaim – one thing now seemed like his destiny.

It took 10 tries, an embarrassing stumble and a reimagined game, but Johnson finally fulfilled all that promise Sunday – not just winning the Masters, but also smashing the 72-hole scoring record en route to a five-shot victory over Cameron Smith and Sungjae Im.

Like most things in 2020, the scene wasn’t what Johnson had envisioned when he hit balls as a youngster on the lighted driving range at Weed Hill in Columbia, South Carolina, about an hour drive from Magnolia Lane. Only roughly 300 people – off-duty support staff, media, ANGC staff, club members and their spouses, all in masks – ringed the 18th green, bathing in sunshine, mustering as much enthusiasm as they could for a Masters unlike any other. Asked if he felt as though he missed out, not being serenaded by tens of thousands of folks, like normal, Johnson replied: “Nope. I do not.”

Indeed, nothing could take away the feeling he had as he floated to the scoring building with fiancée Paulina Gretzky, turning to her with a smile: “I finally got one.”

Johnson is the first world No. 1 to win at Augusta National since Tiger Woods in 2002, and it was no shock considering how he’s played over the past few months – the best form of a slam-dunk Hall of Fame career. But his blowout victory at this autumn Masters also underscored what he has always been: colossally talented and historically resilient.

“He never gets the credit he deserves for being as tough or as positive or as good as he is,” said his swing coach, Claude Harmon III. “And hopefully now he gets the justice he deserves.”

Now 36, with a competitive lifetime of scar tissue, Johnson remains a sports psychologist’s dream. He’s suffered unimaginable on-course pain, only to shrug it off and put himself back in position to get his heart broken again. His record with at least a share of the 54-hole lead is cringeworthy for a player of his stature: 10 for 21. Most crushing to his legacy, he was a record 0-for-4 as the frontrunner in majors, including another loss a few months ago at the PGA Championship, where he led by one, closed with 68 but still was lapped by major newbie Collin Morikawa. At least that letdown paled in comparison to the prior crushing defeats, a list of lowlights that included an 80 at Pebble Beach and the inadvertent penalty at Whistling Straits, the out-of-bounds shank at Royal St. George’s and the three-putt on the 72nd hole at Chambers Bay.

The lone major he won, at the 2016 U.S. Open, was shrouded in confusion following a controversial penalty. Johnson didn’t know for sure where he stood until the 72nd hole. When he found out his position – three clear, about to win – he said: “Oh, good.”

Reveling in the excitement that day, Winkle predicted, like many, that the Oakmont Open would be Johnson’s first of many major titles. A year later, Johnson came flying into the 2017 Masters, the winner of three straight tournaments, until he slipped on the stairs of his rental house, injuring his back. He pulled out of the tournament and wasn’t the same force the rest of the year. In 2018, he shared the halfway lead at the U.S. Open but faded with a Saturday 77. Last year, before dealing with lingering knee pain, he was topped only by Tiger Woods (Masters) and Brooks Koepka (PGA) in the first two majors of the year. When told that he’d completed the Grand Slam of Runners-Up, Johnson sarcastically cheered, “Yayyyyy.”

Still, Johnson was undeterred. "His philosophy has always been: Just give yourself chances," Harmon said.

This year brought another chance, at TPC Harding Park, when Johnson grabbed a one-shot lead after 54 holes of the PGA Championship. But his peers knew his closing rate, and the fear factor was gone. Koepka cruelly dismissed him on the eve of the final round, saying, “He’s only won one,” a potshot that packed a harsh truth. Even if he missed his intended target.

“Dustin was dipped in Teflon at birth,” Winkle said. “He’s never wasted one second of his life worrying about something he can’t control. That’s what we all do. We beat ourselves up. We get ahead of ourselves. But he doesn’t, and never has, worried about the judgment of others.”

Said Rory McIlroy: “I think he’s got one of the best attitudes in the history of the game.”

Still, it seemed as though another opportunity might be slipping away when Johnson tested positive for COVID-19 less than a month ago. Experiencing only mild symptoms, he spent 11 days in the same villa, waiting out his quarantine period. When he showed up last week in Houston, for his one and only Masters tuneup, he was rusty and moving poorly; normally stretched out twice a day during tournament weeks, he hadn’t seen his physiotherapist in nearly two months. After the first round there, Harmon told Johnson to hit wedge as hard as he could, then 8-iron, then driver, to get his body loose. Freed up, he shot 66-66-65 and finished second, steamrolling into the Masters.

More than a decade ago Winkle held high hopes for his client’s Masters prospects, but Johnson didn’t record a top-10 until his sixth attempt, in 2015. In many ways, his struggles at Augusta National were emblematic of his underachieving career.

“The first seven or eight years, I’d tell him: ‘You know, you’re going to be the best player in the world when you want to be,’” Winkle said. “And he’d say, ‘I want to be, Wink. Next year is the year.’ But I didn’t see it in his actions.”

That's when Johnson began working with a life coach and clinicians to better handle stress and anxiety. And he switched his shot shape from a draw to a fade. And he purchased a TrackMan and dialed in his intermediate wedge play. But the most significant change may have been more personal. In 2013, after winning the World Golf Championships event in China, Johnson decided to hire his younger brother Austin full-time as his caddie. For years, Austin, 33, was perceived as the lovable loon, his reputation solidified after slapstick stories of him forgetting rain gear, struggling to number-crunch yardages, reading a greens book upside down or, worse, forgetting it altogether. But together they’ve grown into one of the strongest player-caddie duos on Tour as Austin continues to perfect his craft.

Though Dustin is one of the fastest players on Tour, he’s recently slowed to a crawl on the putting green. That’s by design. In the past after a missed putt, Johnson would head to the edge of the green and “start to f--- with his stroke,” Harmon said. After the round, he’d inevitably dig into his truck for another game of putter roulette. But this summer Johnson committed to using the same TaylorMade Spider and an identical routine, bringing in Austin for every read (he straddles the line, with the help of AimPoint) and implementing a pre-shot trigger to tuck in his right elbow. “I was timing it and videoing it and it’s the exact same thing, every time,” Harmon said. “They’ve really zoned in together.”

The key to their success has been unwavering consistency. Johnson is a creature of habit who craves a routine on the road. He wakes at the same time. Works out at the same time. Eats the same thing for dinner, chicken and broccoli. (Why switch things up now? He’s won 15 of his 24 career Tour titles since 2016.) On the course, he’s as regular as clockwork. Warming up Sunday on a cool, foggy morning, Johnson hit a 56-degree sand wedge for 14 consecutive minutes. He wiped the clubface after each strike, glanced down at the tablet spitting out TrackMan numbers and fired another wedge over the far-left flag in the middle green, the picture of calm.

Of course, there was little need for stress after a pair of 65s gave Johnson a share of the 54-hole tournament scoring record at 16 under. But soon his advantage started dwindling: four to start the day, then three, two, one. Needing to steady himself, he skied an 8-iron into the par-3 sixth, leading to a short birdie and returning his advantage to two shots. His pursuers would never draw closer.

Because it’s DJ, you half-expected another calamitous event – a rope-hook into the cabins, a sleeve of balls in the creek, a visit to the azaleas – but not today, not this historic week. He escaped Amen Corner without a dropped shot, then followed Austin's best read of the week on No. 13. Playing a 3-foot break on a 3% slope, Johnson poured in the birdie putt, and the rout was on. He signed for a record 20-under 268, and his five-shot victory was the largest at Augusta National since 1997.

On the 18th green, when he tapped in to polite applause, Johnson clenched his right fist in what has become his signature subdued celebration. Behind him Austin was already wiping away tears.

Soon it’d be Dustin’s turn to break down. After Woods slipped him into a size-42 long green jacket, Johnson posed for pictures before turning his attention to the TV interview.

“As a kid I always dreamed about being a Masters champion,” he said, his voice beginning to crack, as he looked to Woods for reassurance.

He pinched the brim of his nose. “Wow,” mouthed low amateur Andy Ogletree, watching as Johnson, typically stoic and oozing jock swagger, tried and failed to find the words to sum up his achievement.

“I’ve never had this much trouble gathering myself,” he said.

So the interview was cut short, after a few tears and just one semi-answer. When they were no longer live, Johnson sheepishly apologized, handing back the microphone.

“Sheesh,” he said, collapsing into Gretzky’s open arms. “I couldn’t even talk. I’m just so excited.” 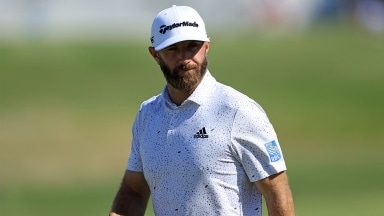 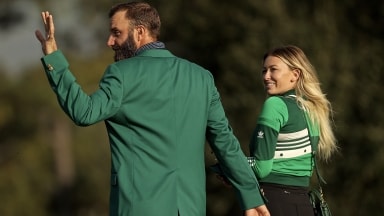 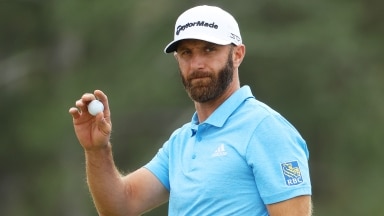