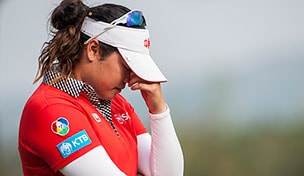 Ariya Jutanugarn’s stumble at the end of a thrilling day of highs and lows didn’t just stagger the 17-year-old prodigy in Sunday’s conclusion of the Honda LPGA Thailand.

It wobbled an entire golfing nation.

On the verge of becoming the first Thai to win an LPGA event, Jutanugarn stepped to the 72nd hole with a two-shot lead on Inbee Park, who was already in the clubhouse.

Emboldened by a hole-in-one at the 12th, which catapulted her back over the hard-charging Park, Jutanugarn made triple bogey at the last hole and lost to Park by one shot.

Jutanugarn missed a 3-footer for double bogey that would have pushed her into a playoff.

Jutanugarn was trying to become the third youngest winner of an LPGA event. She thrilled her homeland on Saturday chasing down reigning LPGA player of the year Stacy Lewis to take a three-shot lead into the final round. She thrilled them again Sunday making an ace at the 145-yard 12th.

“I was really disappointed because I went onto the course hoping to win not for myself but for the whole country,” Jutanugarn told the Associated Press. “A lot of people came to support me and wanted to see me win. But I didn't make it. However, I was so happy that they still supported me even though I didn't live up to their expectations.”

Park was as stunned as Jutanugarn. A year after winning the LPGA money title, Park is off to a fast start with a victory in her first start of 2013.

At the 18th, Jutanugarn aggressively went for the green in two at the tricky par 5, with her shot reaching a bad lie in a greenside bunker. She took a penalty and a drop for an unplayable lie. Her fourth shot sailed over the green. She left her chip short, on the fringe, and three putted from there.

Park started the day four shots behind Jutanutgarn. Park closed with a 5-under-par 67, Jutanugarn with a 72.

“I just didn’t expect this kind of finish,” Park said. “But I really want to congratulate Ariya for her fantastic golf the last four days. She has a lot of fans out here, and she’s very talented. So, I think I’ll be seeing more of her.”

Jutanugarn’s run came a week after 15-year-old amateur sensation Lydia Ko made headlines taking a share of the lead into the final round of the LPGA’s season-opening ISPS Handa Women’s Australian Open. Ko’s bid to win back-to-back professional events was denied when Jiyai Shin outplayed her in the final round.

Moriya tied for fourth in Australia last week and ended up tying for 59th in Thailand.

Ariya is considered the more accomplished of the sister tandem. She won the U.S. Girls’ Junior two years ago and was medalist at the U.S. Women’s Amateur Public Links three years ago. She lost to Ko in the semifinals of the U.S. Women’s Amateur last summer. Ariya sought to join her sister at LPGA Q-School last fall but was denied a waiver of the LPGA’s rule requiring members be at least 18.