HOYLAKE, England – Two years ago, just one member of the U.S. Walker Cup team turned pro right after the match. This year, five members of a victorious American squad are set to make the jump after a five-point triumph at Royal Liverpool.

Stanford teammates Brandon Wu and Isaiah Salinda, Duke’s Alex Smalley and Georgia Southern’s Steven Fisk all graduated earlier this year, and all waited to turn pro for the opportunity to represent their country. They will be joined by 17-year-old Akshay Bhatia, who will forego college altogether and make his pro debut in three weeks at the Safeway Open.

“I couldn't think of a better way to end my amateur career,” said Salinda, who announced Monday that he was signing with Lagardere for representation. (Bhatia agreed to a deal with Lagardere in May.) “This was awesome. I don't know, I'm not even thinking about turning pro yet, I just want to enjoy this win with the guys, to be honest. But again, like perfect ending to my amateur career. This is kind of the one thing I wanted to do before I turned pro.”

As for the Great Britain and Ireland team, which had all 10 players turn pro shortly after the 2017 match at Los Angeles Country Club, just two players played their last amateur event at Royal Liverpool.

“It was more than what I expected. It was such a great experience,” said Scott, a senior who will be pro by next Walker Cup. “It was overwhelming, the amount of support we had here. I was saying to Nigel [Edwards] there that you don't get this opportunity to play in such a great crowd in any amateur event, so this is great preparation for what we're about to go ahead and compete in on Tour and professionally.” 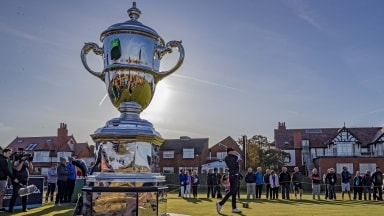 Throw out the rankings. Throw out the history. The U.S. trails by one point entering Sunday singles at the Walker Cup, and the finish should be a battle.