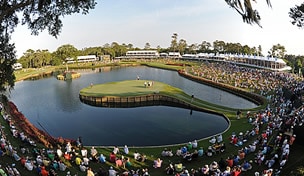 Getty Images
IRVING, TX - MAY 21: Blake Adams follows through on an approach shot during the second round of the HP Byron Nelson Championship at TPC Four Seasons Resort Las Colinas on May 21, 2010 in Irving, Texas. (Photo by Darren Carroll/Getty Images)  -

Why it’s famous: The shortest hole at Augusta National is guarded by Rae’s Creek, backed by pine trees and azaleas, accessed over Hogan’s Bridge, and surrounded by a deceptive and swirling wind that even people who have played the Masters dozens of times struggle to read. Jack Nicklaus calls it the best little par 3 in the world.

A story: In 1947, Claude Harmon was playing the Masters with Ben Hogan when he made a hole-in-one on No. 12. The crowd cheered madly. When he got to the green and picked the ball out of the hole, the crowd cheered madly again. Harmon waited for Hogan to say something – Hogan was famously icy to competitors. Hogan said nothing. Harmon was about to give up hope, but as they walked to the 13th, Hogan finally spoke.

“You know something, Claude,” Hogan said (according to the story), “I think that’s the first time I ever made birdie there.”

PONTE VEDRA BEACH, Fla. – Here’s the question: Is the 17th hole at TPC Sawgrass a great golf hole? The Island Green – the one surrounded entirely by water except for a 12-foot-wide walkway, you know the hole – is unquestionable one of golf’s most famous holes. It is certainly one of the most iconic holes. It is so popular that people line up just to chip balls toward a miniature version of it in front of the TPC store. It makes for great, great television.

But: Is it a great hole?

“I was playing by myself with no fans on Sunday,” says former PGA champion and Ryder Cup captain Davis Love III, “and I got up there to No. 17. The wind wasn’t blowing, and I was still nervous. … It’s nerve-wracking. I think it makes this tournament become iconic.”

So, that’s one view. But the thing that makes No. 17 a fascinating hole is that for everyone who loves it, there’s someone else who does not. Here’s former PGA player and Golf Channel analyst Brandel Chamblee: “I absolutely think this tournament should be a major. I think one of the things that keeps it from getting its due is the 17th hole. …  There’s a contrived part of the 17th hole that makes it great TV, that makes it great drama, that I think makes the feel of the golf course quirky.”

Yes, this is at the heart of the 17th hole. Is it excellent or quirky? Is it a gimmick or does it have real greatness?

Why it’s famous: Everything about the hole is iconic, from the tee shot (where you hit over a shed with “The Old Course Hotel” sign on it), to the Road Hole bunker (which is so deep that golfers usually have to hit the ball out sideways) to the road itself and the stone wall behind it which are all in play.

A story: In 1984, Tom Watson was tied for the lead as he teed off on the Road Hole – an effort to win a record-tying sixth British Open. He hit the fairway, had 183 yards left, but because of his angle he decided to fly the ball into the green rather than chase it up there. He hit it over and onto the road, only a few inches away from the wall. From there he was only able to jab the ball up on the green, about 35 to 40 feet from the hole. He missed the putt and lost the British Open to Seve Ballesteros.

“My favorite golf courses,” Watson said, “look easy. You want it to look easy so that a golfer can feel at home. Then, as they play it, they find it’s not easy at all.”

One thing about the best golf holes is that they have a depth to them. They are beautiful and challenging and historic. Look at No. 12 at Augusta. It demands more than just nerves of steel … it demands that a golfer make a good decision and judge the twisting winds and plot out the proper place to hit the ball and overcome the ghosts of all the people who lost the Masters there.

Look at the road hole at St. Andrews. It looks like nothing, but history swirls around the place, and there are countless ways to play it, and like Watson says what looks easy is difficult, and what seems simple is in fact drenched in complications.

What about the Island Green?

“I like it,” six-time major champion Nick Faldo says of the Island Green. “I like it because you think about it before you drive in the gate. …  It gets your attention.”

Why it’s famous: It is probably the most iconic finishing hole in golf, not so much for its difficulty as its beauty. The hole runs along the Pacific Ocean, a very long bunker guards the left side of the green (where the Sunday flag is always placed) and a single Cypress tree also guards the green.  The decision to go for the green or lay up is one of the most interesting in professional golf.

A story: At the 2000 U.S. Open, John Daly came to No. 18 and hit his drive right. When he got to the ball, he realized that it was out of bounds. So, he trudged back to the tee where he promptly hooked two balls into the water. He then hit a ball into the fairway, laid up in front of the green, then hit his approach shot into the water. He took a drop in the bunker and, because of the angle, was forced to play his next shot left-handed. The ball stayed in the bunker. Then he chunked it up on the green and two-putted for a 14.

And then, he withdrew from the U.S. Open.

The 17th hole at Sawgrass wasn’t supposed to be an island green, you know. When architect Pete Dye and former PGA Tour commissioner Deane Beman were building this new kind of golf course – with the spectator in mind as well as the golfer – the 17th hole was meant to be a par 3 with a lake. That’s all. But, you should know, TPC Sawgrass was built on swampland, which means that the builders were constantly looking for good sand to use. Most of the best sand seemed to be surrounding the 17th green, and so they dug deep into the dirt.

“You know,” Pete Dye’s wife Alice, a golf architect herself, said as she saw all the ground dug up around the green, “we should just make it an island green.”

Still, they keep coming back.

As far as tournament play goes, it’s probably the most telegenic golf hole in the world. Ten cameras catch every movement. The huge crowd surrounding the green gives it atmosphere. Each tee shot is a hold-your-breath moment.

Since they started having The Players Championship at Sawgrass in 1982, 8 percent of the professionals – about one in 12 – have made double bogey or worse. And when the wind howls like in 2002 and 2007, those numbers skyrocket. In 2007, 93 balls were hit in the water, roughly one out of every five shots.

All the golfers think about No. 17. They obsess over it. They argue about it. When golfer Brian Stuard played his first-ever practice round here this week, he wanted only to land the ball on the green (he did). Davis Love – who has shot a record 22 sub-par rounds at Sawgrass – says he avoids even thinking about No. 17 until he’s ready to hit the tee shot. When Fred Couples walks the 16th fairway, he will not even look at 17 – and Couples actually has some good memories at 17. He made a hole-in-one in 1997. And in 1999, he dumped a shot in the water, quickly and angrily teed up in the same spot, hit a shot, and watched it drop in the hole for the craziest par in the history of the hole.

Why it’s famous: The Island Green is instantly recognized by golf fans around the world because of all the water and for the many golfing disasters that it causes. For better and worse, it is probably the most talked-about hole in American golf.

A story: In 1985, a grocery manager named Angelo Spagnolo was one of four men competing in Golf Digest’s “America’s Worst Avid Golfer” competition. The four all played as poorly as you might expect – 179 was the low score – but the competition for worst was somewhat up for grabs as they went to the 17th hole.

And there, Spagnolo found lifelong fame. He hit 27 balls in the water. No. Really. Twenty-seven. He hit two dozen balls that were given to him and then was forced to hit range balls to complete the hole. At one point, an official suggested that, in the interest of ending the tournament before they all died of old age, Spagnolo might consider putting the ball on the cart path and going AROUND the lake, then putting the ball up the walkway on to the green. Spagnolo did that and made it to the green in 63 shots. From there, he was a mere three-putt away from his legendary 66. He became, unquestionably, the worst avid golfer in America.

“I just don’t give up,” Angelo told a reporter more than two decades later.

Yes, of course, there are many things that make up a great golf hole. Beauty. Difficulty. Scenery. History. Strategy. In the end, though, it probably comes down to the memories made there. Tom Watson chipped in on the 17th at Pebble Beach. Jean van de Velde utterly fell apart on the 18th at Carnoustie. Tiger Woods pointed at the hole as his putt dropped at No. 16 at Valhalla in Louisville. A photo of Ben Hogan hitting his 1-iron shot at Merion is probably the most famous in golf history, and the image of Jack Nicklaus raising his putter to the sky as his putt fell at No. 17 at Augusta is indelible.

The memories make those holes great.

In 1998, Len Mattiace was trailing by one going into the 17th hole at The Players Championship. Mattiace was a true local -- he had gone to high school just down the road in Ponte Vedre, the course was his golfing home. And everyone was rooting for the hometown guy, not only because of location. His mother, Joyce, who was in the final stages of lung cancer, was in the crowd, in a wheelchair, watching.

He stepped up to the tee and crushed his shot over the green and into the water. The tournament was lost. And then, he sort of got lost himself. He took a drop and hit it into the bunker. He hit the bunker shot back into the water. He finished with an 8. He finished a distant fifth in the tournament. But afterward, Mattiace then handled the loss with dignity, answering every question and making no excuses. Reporters and fans marveled at how he dealt with getting so close to a dream.

Years later, Len’s wife Kristen was talking to reporter Tim Rosaforte about that round. She said that not long after, someone had asked Len’s mother Joyce if she was upset about the way it had ended. She said: “No, I saw my son play a wonderful round. And then I read what people wrote about him, and I got to see the son I raised.” Joyce died three months later.

Len Mattiace would go on to a nice career. He would win a couple of PGA Tour events and lose in a Masters playoff to Mike Weir. But perhaps his greatest moment came at No. 17 at Sawgrass, where he hit the ball in the water but did not let the great hole beat him.