After James Lepp successfully used an unusual 'saucer' chipping style to reach the finals of 'Big Break: Greenbrier' last year, it appeared a new type of shot from around the green was born. Instead, several of golf's ruling bodies came together this week to announce the shot violates the Rules of Golf.

According to a report from the Vancouver Sun, the decision was reached after a meeting of a joint rules committee with representatives of the R&A, USGA and Golf Canada.

'The rule that would be breached is Rule 14-1 that says in part the club can't be pushed, spooned or scraped,' explained Dale Jackson, chairman of Golf Canada's rules committee. 'Scraped here basically means you are intentionally dragging or pulling the club along the ground before it hits the ball, which is what he does.'

Lepp, who in 2005 became the first Canadian male to win a Division I NCAA championship while at the University of Washington, invented the shot to combat struggles from tight lies around the greens. Derivative of a saucer pass in hockey, the stroke involves a short backswing during which the club does not leave the ground.

According to Jackson, Golf Canada originally deemed the stroke legal, as Lepp has previously used it in competition, but his success on the reality TV show caused the issue to be revisited.

'We had dealt with the issue in Canada when James did his demonstration videos on his Web site and we felt it was a conforming stroke at that time,' he added. 'But when he did it on the Big Break, the USGA got a bunch of calls and they came to a different conclusion and as a result of that, the powers that be, the R&A, the USGA and Golf Canada, who all sit on the joint rules committee, considered it and viewed it as non-conforming.'

According to the report, Lepp declined comment until he had received official word and an explanation of the ruling. Below is a video of Lepp putting the stroke into action: 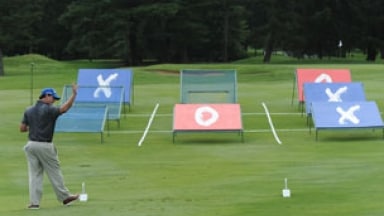