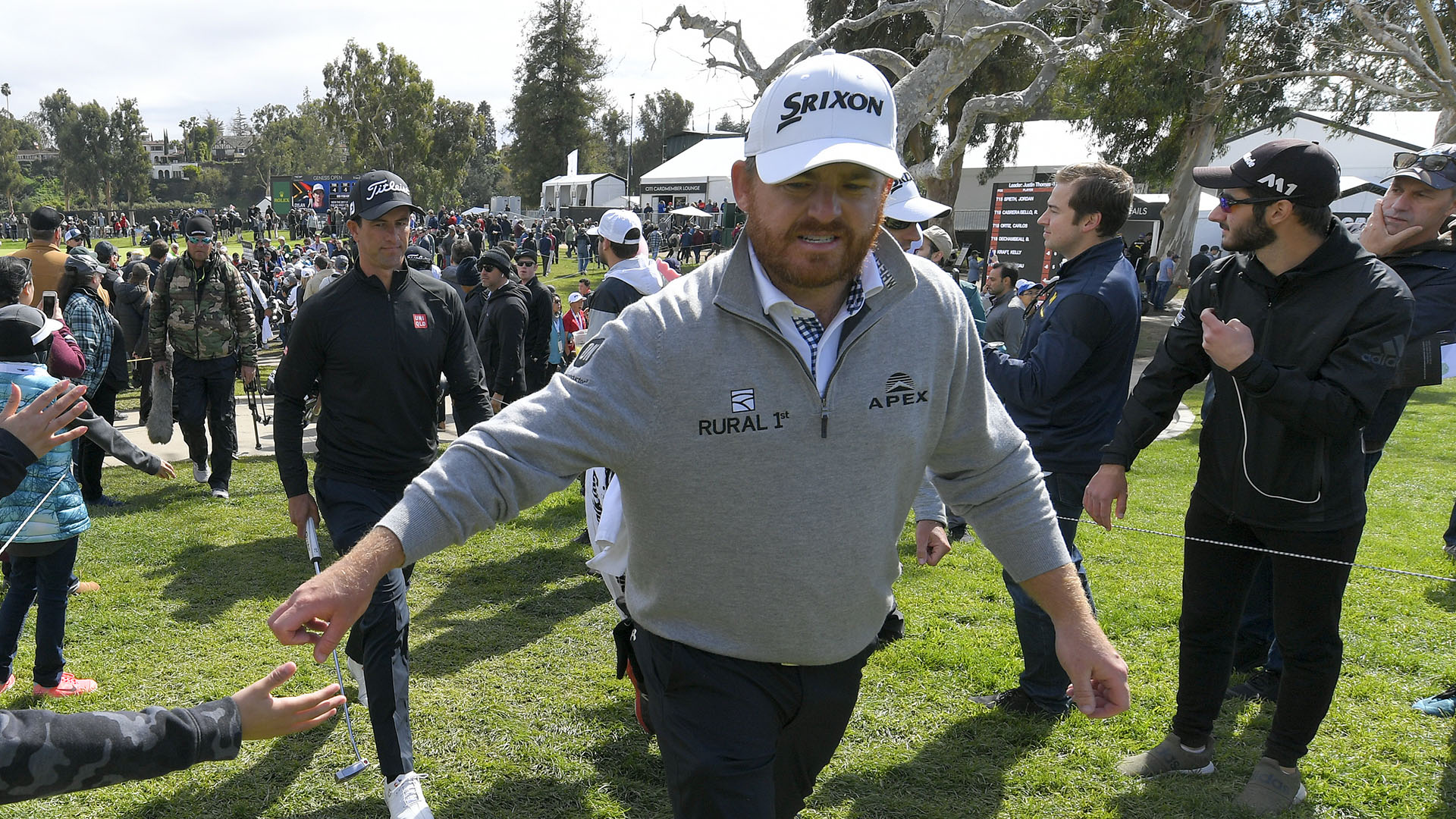 It was a long, trying Sunday at Riviera Country Club, especially for J.B. Holmes, who played 33 holes on the final day before finishing off the victory at the Genesis Open. Here's how it all unfolded:

What it means: The scoring conditions were downright brutal Sunday at the Genesis Open – cold temperatures, gusty winds, fast and bumpy Poa annua greens. The play down the stretch wasn't much better. After a back nine that featured more swings atop the leaderboard than an amusement park, Holmes was able to withstand it all the best. Despite a brutal three-putt from inside of 4 feet at the par-5 11th, Holmes made just one other bogey and shot 1-under 70 to win by a stroke over Justin Thomas, who had built a four-shot lead after 54 holes earlier Sunday. Thomas' lead didn't last long, though. He followed that third-round 65 with bogeys on three of his first five holes. Heading into the par-3 sixth, Thomas suddenly found himself tied with Holmes. The two traded leads several times on the back nine, the final time coming after Thomas four-putted for double on the par-4 13th hole. Thomas birdied the par-3 16th to make things interesting but ultimately finished with a disappointing final-round 75.

The third member of the final group, Adam Scott, closed in 76 after a round that included a handful of short misses with the putter. Holmes, who entered the week at No. 100 in the world rankings, hadn't won since the 2015 Houston Open but is now a five-time PGA Tour winner.

Round of the day: There weren't many under-par final rounds as winds picked up Sunday afternoon around Riviera, but Si Woo Kim managed to make seven birdies and shoot 5-under 66. His solo-third finish was his best showing since finishing runner-up at last year's RBC Heritage.

Best of the rest: Marc Leishman played Nos. 10-13 in 4 under with an eagle at the par-5 11th on his way to a closing 68. The big Aussie finished T-4 at 11 under along with Rory McIlroy, who closed in 69 – a round that included an eagle at No. 1 and a holeout birdie at No. 16 – and notched his third straight top-5 finish. Hideki Matsuyama saved his best for last, posting a final-round 67 to end up T-9. Michael Thompson notched his second straight top-10 finish despite a 73-70 weekend. He'll be eligible to play next week in Puerto Rico.

Biggest disappointment: Jordan Spieth won the wrong kind of lottery, carding a 3, 4, 5, 6, 7 and 8 in his final round. The 8, a quadruple bogey on the par-4 10th hole, was the lowlight of Spieth's closing 10-over 81. It was the worst score of Spieth's PGA Tour career, and he had to par each of the final eight holes to avoid an even worse score.

Shot of the day: There are few things in golf better than a Tiger Woods club raise. Woods treated everyone to one of those vintage celebrations after holing this bunker shot for birdie on the par-3 16th hole. Woods made just three birdies in the final round, shooting 72 and finishing at 6 under.

What a call on this @TigerWoods bunker shot. 🤯#LiveUnderPar pic.twitter.com/Nx9jHQU3Ku

Quote of the day: "J.B. won, he played great, but it's always a bummer to hand a tournament (to someone). I should've won that thing." – Thomas