Not even West can woo Tiger to Riviera 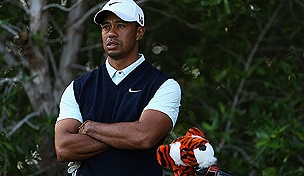 He could deliver in the clutch as well as anyone who ever played the NBA.

Beloved here in the City of Angels, West was brought in a little more than three years ago as the executive director of the Northern Trust Open to restore some of the luster that this tradition-rich tournament enjoyed for all those years as the L.A. Open. The star power Riviera Country Club attracted went beyond Hogan, Nelson and Snead. This club was home to the likes of Humphrey Bogart, Gregory Peck, Dean Martin and Vic Damone.

By all accounts, West has scored big points for this event, drawing important new corporate support, boosting charitable efforts and the Legends Club, improving the tournament field and generally elevating enthusiasm for the event with his elegant presence. He came out of retirement to pour his passion into a sport he has come to love and into the giving PGA Tour golf uniquely specializes in.

Yet for all his heartfelt devotion and commitment, the NBA Hall of Famer and Lakers legend hasn’t been able to deliver the one commodity this event most needs to vault back to elite status.

As much as he’s tried, West hasn’t been able to deliver Tiger Woods.

Born and raised just 40 miles south of Riviera Country Club, Woods played his first PGA Tour event at the L.A. Open. He was 16 when the tournament offered him a sponsor’s invite. He got another one when he was 17.

Woods played this tournament 11 times. He finished second in ’98, and he tied for second again the following year. He tied for fifth in ’03 and tied for seventh in ’04, but the hometown kid never broke through to win here.

Back in ’06, Woods pulled out of this event after 36 holes with the flu.

He hasn’t been back since.

Riviera has the distinction of being the venue Woods has played most without winning.

West, now 74, isn’t sure how much longer he will continue in this tournament role. There’s speculation this could be his last year. If it proves to be, Mr. Clutch will have delivered everything but Tiger to this event he’s come to care so much about.

Still, if it frustrates West to any degree that he couldn’t woo Tiger, he doesn’t betray it.

“I really respect Tiger a lot,” West told GolfChannel.com as he made his way to the practice putting green Tuesday morning. “He has a lot of people pulling and tugging at him. Obviously, it’s disappointing he’s not here, but that’s his prerogative, OK. Trust me, I hold no animosity or ill will against him.”

West didn’t land Woods for lack of trying. He knows Tiger, and he plays in Woods’ World Challenge pro-ams.

“I would hope Tiger would play here someday,” West said. “He has so many fans, and they gave him his first opportunity to play here. Maybe it will happen, maybe it won’t, but I admire him as a golfer. I very much like him as a person. That has no bearing on whether he’s going to play in the golf tournament for me.”

It doesn’t help the Northern Trust Open that Woods has found a new hometown event. Now that he’s living on Jupiter Island, Woods is in The Honda Classic’s backyard. He played it for the first time last year, finishing second to Rory McIlroy, and he is committed to playing it again this year.

If Woods played the Northern Trust this week, he would be playing four weeks in a row, five of the next six weeks.

Corey Pavin, who played for nearby UCLA, is playing this tournament for the 30th time this year. He won it in ’94 and ’95 and was paired with Woods here a couple times.

Pavin doesn’t know why Woods abandoned trying to win this event, but he suspects Woods lack of success at Riviera might be a contributing factor.

“I’m sure not winning here, or playing as well as you would like, is a factor,” Pavin said. “We always want to play at courses where we’ve done well. Maybe there’s something he feels uncomfortable with here, I don’t know. I think it’s more a scheduling issue. He has to figure out what’s the best thing for him and best way to perform.”

“The feel of the golf course, your good memories of the golf course; that's a big determinant. Your past performances will bring you back to a golf course, but no doubt a tournament director can build a relationship that a player will always want to, certainly do his utmost to keep that on the rota.”

While West knows Tiger’s good for Riviera, he’s still searching for ways to persuade Woods that the event will be good for Woods. He’s still figuring out how to deliver that last big score.