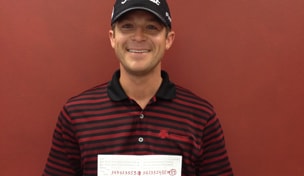 Golfers are going low in Orlando this week even outside of the Arnold Palmer Invitational at Bay Hill. Earlier this week, 33-year-old local golfer Jesse Smith shot a 59 during the first round of the Fore The Players Tour at par-70 Dubsdread Golf Course.

Smith's luck would run out quickly on Day 2, the final round of the event. His driver cracked on his opening tee shot. Playing without it the rest of the way, he shot a 74 in the second and final round to lose to Andy Pope by one shot. Pope took home an $1,100 payday while Smith earned $600 -- plus bragging rights for life.