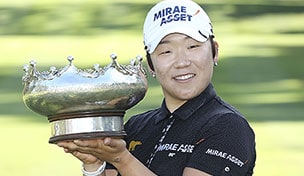 In what was billed as a final-round showdown between Lydia Ko and Jiyai Shin, the former world No. 1 out-dueled the 15-year-old amateur and survived a furious charge by Yani Tseng to capture the ISPS Handa Women's Australian Open.

Shin, 24, shot a final-round 1-under-par 72 at Royal Canberra Golf Club, highlighted by a spectacular pitch-in for birdie on the 14th hole, to win the LPGA's season opener by two strokes at 18-under 274.

World No. 1 Tseng, who began the final round eight shots behind co-leaders Shin and Ko, fired a closing 66 to finish second.

For South Korean Shin, a two-time Women's British Open champion and former world No. 1 who is currently ranked eighth, it was her 11th LPGA win.

'I'm really happy to be here,' Shin said at the trophy ceremony, 'because I had a good chance at this tournament before but finally I won here.'

Ko, who was bidding for her second win in two weeks, fell four shots behind Shin over the first two holes, recovered to gain a share of the lead at the 12th hole, but couldn't keep pace with Shin the rest of the way. She finished third with a final-round 76.

Ko got off to a disastrous start at Royal Canberra Golf Club. She hit her opening drive way left, hit a tree on her first recovery shot, seeing the ball bound back behind her, and made double bogey. She followed with a bogey, while Shin was starting birdie-par.

But Ko, a New Zealand resident who was born in South Korea, clawed her way back into contention, making birdies at the fourth, fifth and 12th, pulling even with Shin when the latter bogeyed the 12th.

Shin missed the green on the short side on No. 14 and appeared in danger of making a bogey, but pitching from behind a tournament sign, she holed the shot for birdie. When Ko made bogey on the same hole, Shin's lead was two shots.

''I had a few struggles with my drives but, I can't play good every single round,'' Ko said. ''Third in a professional event is a pretty good result and I can't say I'm not fully pleased.''

Despite a bogey on the opening hole, Tseng played the front nine in 4 under par, including an eagle on the par-5 sixth. She added three more birdies on the back, but couldn't quite catch Shin.

''I was always feeling good here and I tried my best today,'' Tseng said. ''I got some pretty good lucky bounces, too. I didn't drive as well as the last few days, but I got some good bounces, some good kicks on the fairway, hit a tree, bounced on the fairway so it's kind of really lucky.''