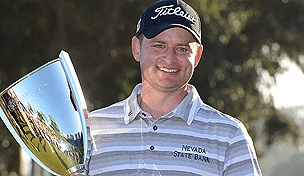 So was Charlie Beljan’s after he lost it.

Stepping off Riviera Country Club’s wicked little 10th hole can have that effect. It can be as disorienting as the tilt-a-whirl at a summer carnival.

“I don’t really have anything good to say about the 10th hole,” Beljan said.

Merrick defeated Beljan on the second hole of their sudden-death playoff, winning with a par after Beljan bombed his tee shot left and into the trees, from where he ended up making his second bogey of the day there.

For Merrick, 30, familiarity hasn’t bred contempt for that hole.

Growing up in Long Beach 45 minutes from Riviera, having played at UCLA just down the road, Merrick has played the 10th countless times. The experience was critical in helping him claim his first PGA Tour title in what is practically his backyard. Beljan played Riviera for the first time this week.

“To be able to play in the tournament was a dream of mine,” Merrick said. “But to win it, I can’t describe it. It’s so much fun.”

To win it at the wicked 10th was especially satisfying. At 315 yards, Riviera’s 10th hole further solidified its reputation as one of the wickedest little par 4s in golf.

“I’m not knocking it,” said Beljan, 28. “It’s just a tough hole to have for a playoff. We may as well go out and put a windmill out there and putt.”

After they both made pars at the 18th, the first hole of sudden death, Merrick and Beljan moved down to the 10th tee, where a hole can be won or lost with the choice of club made at the tee box.

Merrick won laying up with a 3-iron to 87 yards, then squeezing a lob wedge to 18 feet and two-putting for par.

Beljan hit driver. He bombed his drive left and into the trees. He scraped up short of the green with his second, then bumped his third to 5 feet. He missed the putt for par.

“You know, I’ve played it two different ways, and I don’t think either way is right. So, I don’t really know what the strategy is there, other than hoping you make par and that you move on.”

Merrick, 30, who grew up in Long Beach 45 minutes from Riviera Country Club, played the course numerous times while at UCLA just down the road. He has learned the hard way playing that hole so many times in the past.

“I just butchered that hole my rookie year, and a couple years after that, hitting driver and hitting 3-wood in the traps,” Merrick said. “I've just been laying up on that hole. I know with a wedge in your hand, from the middle of the fairway, I think it's better than hitting wood off that tee, and it paid off.”

It’s the second consecutive year the Northern Trust Open has been decided by a playoff at the 10th hole.

“I think it's one of the great short par 4s we play,” Merrick said. “Because when you look at it from the tee, it looks like the most benign hole. You don't see all the slopes up on the left and everything. It's so hard to hit a wood and be in great position there.  I mean, there's this little window, like a little 10-yard window, where you have to put it to get up and down.

“I think it's one of the great holes.”

Great for Merrick Sunday, not so much for Beljan.