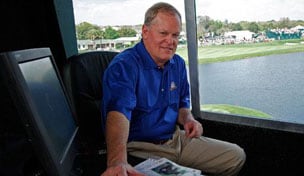 Getty Images
GRAND BLANC, MI - AUGUST 01: Tiger Woods hits his second shot on the first hole during the third round of the Buick Open at Warwick Hills Golf and Country Club on August 1, 2009 in Grand Blanc, Michigan. (Photo by Gregory Shamus/Getty Images)  -

The following quotes are from the NBC broadcast of Monday's final round of the Arnold Palmer Invitational:

On Monday’s final pairing and the crowds at Bay Hill

Johnny Miller: “This Fowler-Woods pairing today was really compelling, and this is an amazing gallery for a Monday.”

On Tiger Woods’ return to world No. 1

Miller: “Maybe that will actually help Rory McIlroy by taking the heat off him being No. 1 and set him free again.”

Miller: “I think it is more than beginning, it is here and doubled up.” (On whether Woods’ intimidation factor is back)

Miller: “He is No. 1 this week in strokes gained-putting. Also, No. 1 in course knowledge, wins, No. 1 easily in thinking and playing under pressure if you want to keep the list going.”

Miller: “Tiger gave him the opening by going into the bunker. No excuse to hit that iron shot he hit, that was a miserable shot.” (On Fowler’s approach that missed the green on No. 15)

Gary Koch: “It’s all coming unraveled.” (On Fowler’s multiple shots into the lake on No. 16)

Miller: “It is tough to see, to watch somebody with a great chance, like Roger (Maltbie) said, and then just throw it away.” (On Fowler’s triple bogey at No. 16)

Miller: “Might be running out of balls after throwing that in there. He’s got three of them in that lake.” (On Fowler’s triple bogey at No. 16, after throwing his ball into the lake after making his putt)