Still at a loss, Spieth (74) appears no closer to finding the answer 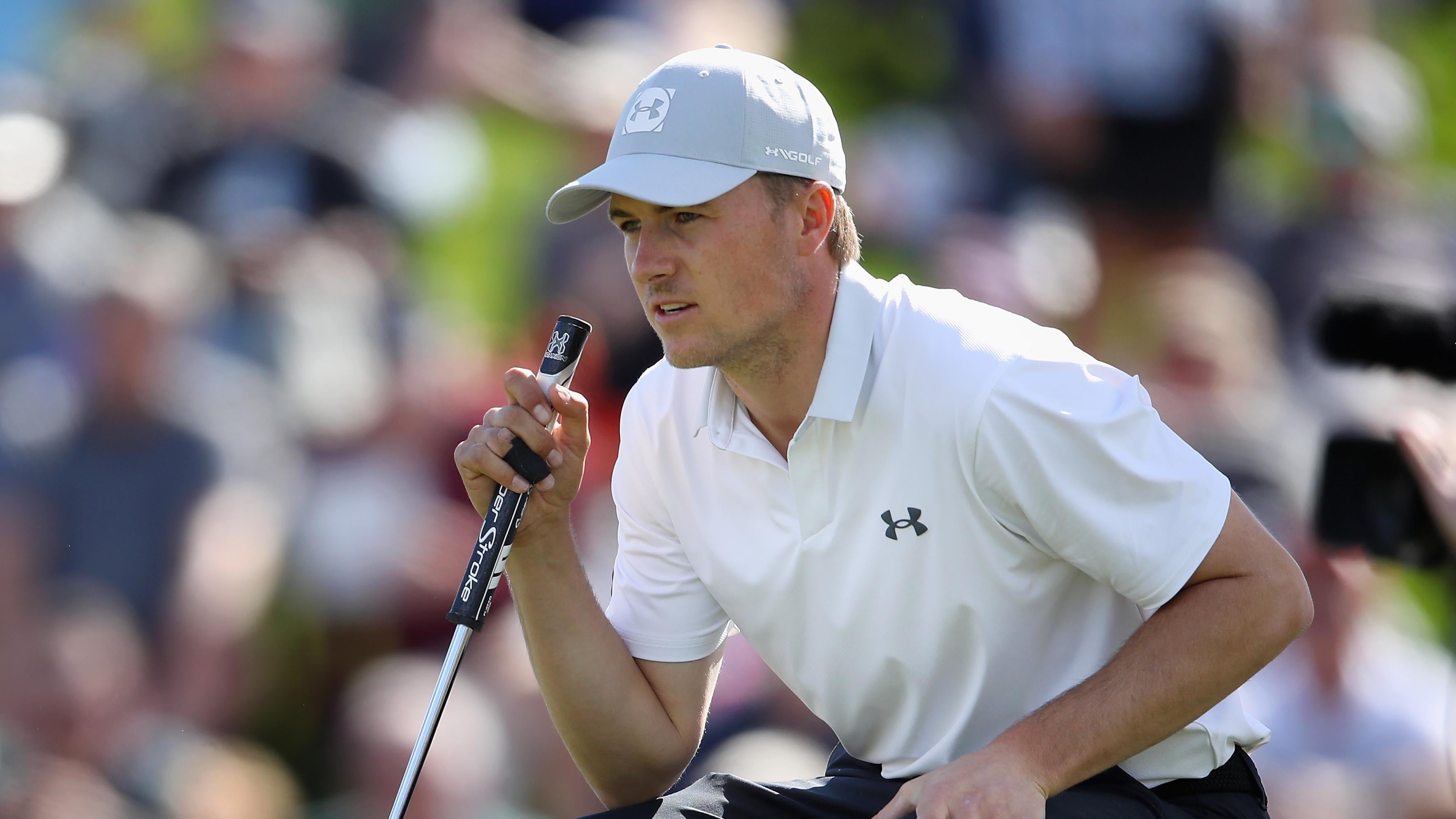 SCOTTSDALE, Ariz. – Imagine showing up to work and being judged against the best you’ve ever performed. Your most lights-out week in the office, the most captivating meeting you ever led. It’s a prospect that can propel some to even greater heights and drive others into the ground, burdened by endless expectation.

Such is the plight encountered by Jordan Spieth on a weekly basis on the PGA Tour. Try as he might to blend into the background, to dig answers out of the dirt in relative anonymity, reminders of the heights he once reached – and the widely held expectations for him to return to that lofty perch – are never far away.

Next on the tee, from Dallas, Texas…

Spieth doffed his cap to the large crowd lining the opening hole Thursday at TPC Scottsdale, took three practice swings and got a final squeeze of a towel from caddie Michael Greller.

Yes, those were the days. That was when the game felt easy, and the swing felt free, and the doubt never lingered beyond the next shot.

But as currently constituted, Spieth is not that guy. And he promptly showed it after the lengthy introduction from the starter, hooking a 3-wood 20 yards left into the dreaded native area with his first swing of the day. It led to a bogey, one of four on the round, as Spieth signed for a 3-over 74 that left him heading towards a likely missed cut.

Once atop the world rankings for 26 weeks, Spieth began the Waste Management Phoenix Open in unfamiliar position. He’s now ranked 51st in the world, somehow sandwiched between Tom Lewis and Adam Hadwin. It’s no position for a former prodigy turned full-blown savant, but the math of the OWGR doesn’t leave any room for narrative color. You either perform or you don’t, and Spieth’s struggles have been well-documented. He’s now almost three years removed from his most recent win, when he got his hands on the claret jug at Royal Birkdale, and he’s had only one top-5 finish since the 2018 Masters.

Time and again, Spieth has tried his best to reverse course. He’s played more. He’s played less. He’s focused on reviving his transcendent putting stroke, and he’s worked on reining in the foul balls off the tee. Thursday in the desert, the U.S.S. Spieth was springing leaks from all directions: 99th in strokes gained: tee to green, 114th in strokes gained: putting. His lone birdie was from 3 feet away on the third hole, and he made only 45 feet of putts on the entire round.

Spieth was grinding away on the range with swing coach Cameron McCormick ahead of Wednesday’s pro-am round, but once again the answers failed to materialize once the scores began to count. Often speaking of how close his swing feels or the relative proximity of renewed success, Spieth opted to decline an interview request after the opening round.

“There’s no science behind it. I mean, you just make putts,” said fellow Masters champ Bubba Watson, who played with Spieth in the opening round. “If you look at just Jordan’s round today, I don’t know what he did in other tournaments, but this round today he just missed some putts, hit a lot of great putts that just didn’t go in. A swing here, a swing there, a missed par putt, you make a quick bogey or miss the birdie putt after hitting some good shots. And that’s all the round is.”

Barring a stirring comeback, Spieth’s search for answers will likely shift west next week as he returns to Pebble Beach, where he won in 2017. But his precipitous drop in the world rankings has thrown his upcoming schedule into limbo, as he’ll need to re-enter the top 50 in the world to qualify for next month’s WGC-Mexico Championship. Miss out on that free points grab, and suddenly the top-64 cutoff for the WGC-Dell Match Play Championship in his home state is no guarantee.

Spieth has been exempt for every WGC since the summer of 2013, but the criteria for making the limited fields is unmercifully objective. For an idea of how fast a ranking can slide, look no further than Phil Mickelson: Lefty was floating right around that top-50 cutoff for much of the fall, but after a few middling results and a pair of missed cuts he’s tumbled all the way to 86th in the world.

What Spieth might need, more than anything, is the one thing he’s least likely to take – a break. The season-long grind can be unrelenting, as players chase points and status and spots in WGCs and majors. Once the schedule hits its stride, bona fide breaks are hard to come by.

J.B. Holmes, who took an early lead Thursday with a 64 and has seen plenty of peaks and valleys in his own right, revealed that one of the keys to regaining confidence when the results dry up has sometimes been just to walk away.

“When stuff’s not going your way and it’s hard to get the scores and get the ball in the hole, it’s tough to stay mentally tough there sometimes. And sometimes you just need a break,” Holmes said. “For me, that’s always been a good way to do it is just to get away from it a little bit and kind of restart.”

But even if Spieth takes a break, whether it lasts four days or four months, the reminders of the heights he once achieved will greet him when he returns. No amount of wayward drives or missed putts will erase the three majors and 11 wins to his credit, but they also won’t dent the expectations for him to return to those glory days.

Spieth was once the man with all the answers. But for at least one more day, with his game still stuck in neutral and players he once towered over now racing past him en masse, those answers were nowhere to be found.