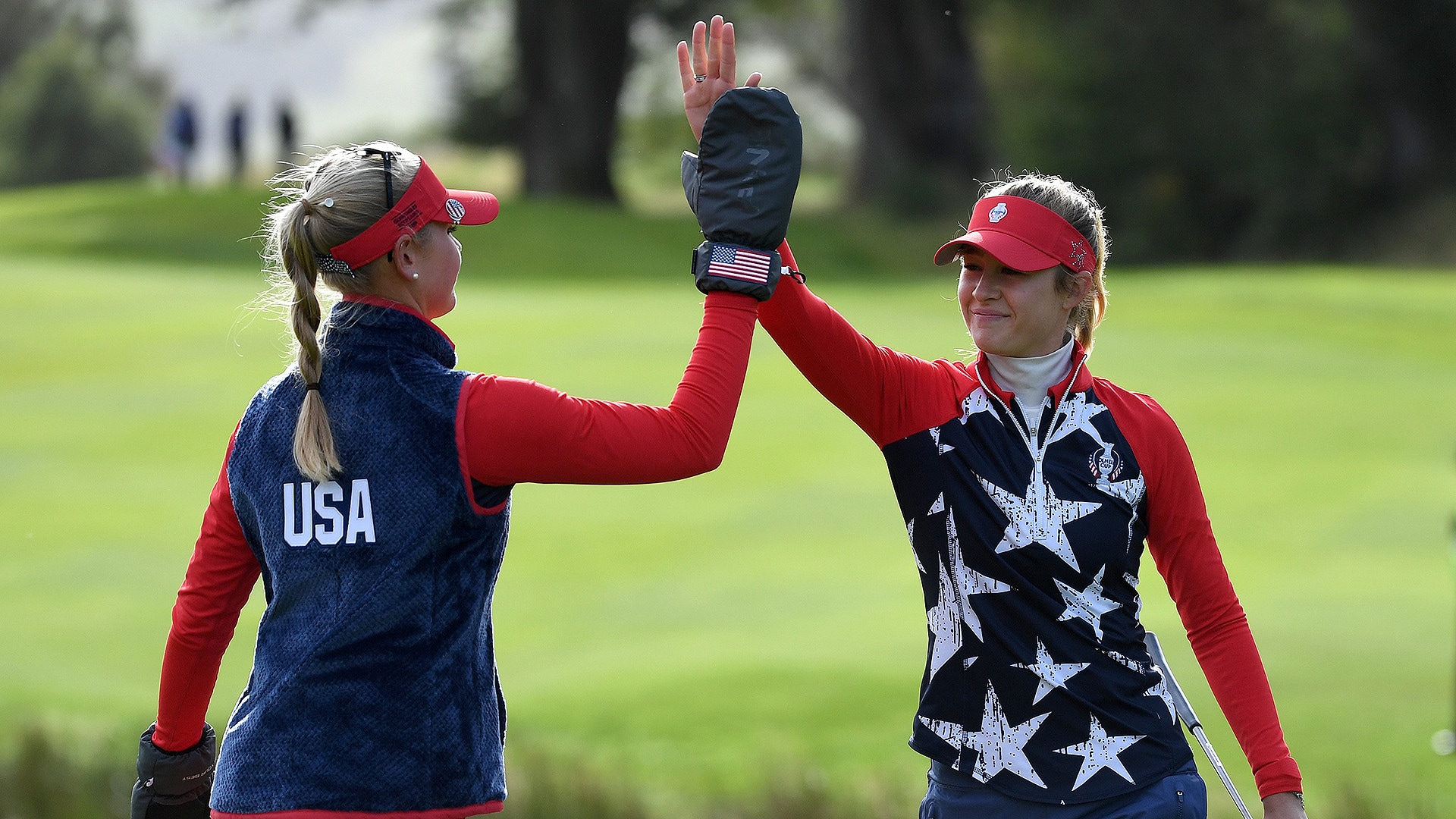 GLENEAGLES, Scotland – The Korda sisters rocked the first tee together Friday making a spirited entrance at the Solheim Cup while also making some history.

And then they rocked Europe.

Americans Jessica and Nelly Korda, the first sister combination to pair together in a Solheim Cup, won the first two holes of their foursomes match and never looked back in a 6-and-4 rout of Caroline Masson and Jodi Ewart Shadoff.

The Kordas put the first point of the competition on the board.

“It was awesome,” Jessica said. “We had fun starting on the driving range, actually. So, it was really relaxed.”

They walked through the tunnel on the first tee clapping together with smoke spewing around them. Nelly said she has dreamed of that moment together since she followed her big sister in Jessica’s first Solheim Cup, outside Denver, six years ago.

“Ever since Colorado, that was the goal that I set in my mind,” Nelly said. “I think both of us did.

“On the first tee, it was so fun. And we had such a good day, really lighthearted.”

Jessica, 26, and Nelly, 21, have similar games. They aren’t just two of the longest hitters playing the LPGA. They’re two of the straightest long hitters. At one point this year, they ranked 1-2 in total driving.

Jessica said being alongside Nelly made this start less nerve wracking than it might have been.

“I was definitely a lot more calm than I was the last Solheim Cup,” Jessica said. “So, I think that helped me as well.

“Just joking around with her all day. There's nothing I can say wrong. I know where her buttons are, so I know where not to step, and vice versa. I was very comfortable with myself and just being out there with her.”

U.S. captain Juli Inkster said her inclination was not to play them together, but they showed her they could perform well at the Dow Great Lakes Bay Invitational team event in July. They tied for 12th there.

Still, Inkster split them up for afternoon fourballs in Scotland.

Lexi Thompson, whose run of nine consecutive matches without a loss in Solheim Cup play ended Friday morning, was paired with Jessica in the afternoon. Brittany Altomare, who played with Thompson in a morning foursomes loss, was paired with Nelly.

“She can put us with anyone and it would be fine,” Jessica said. “I don’t feel like it’s that difficult in terms of how our personalities match up. We have a lot of friends on the team. We all get along.”