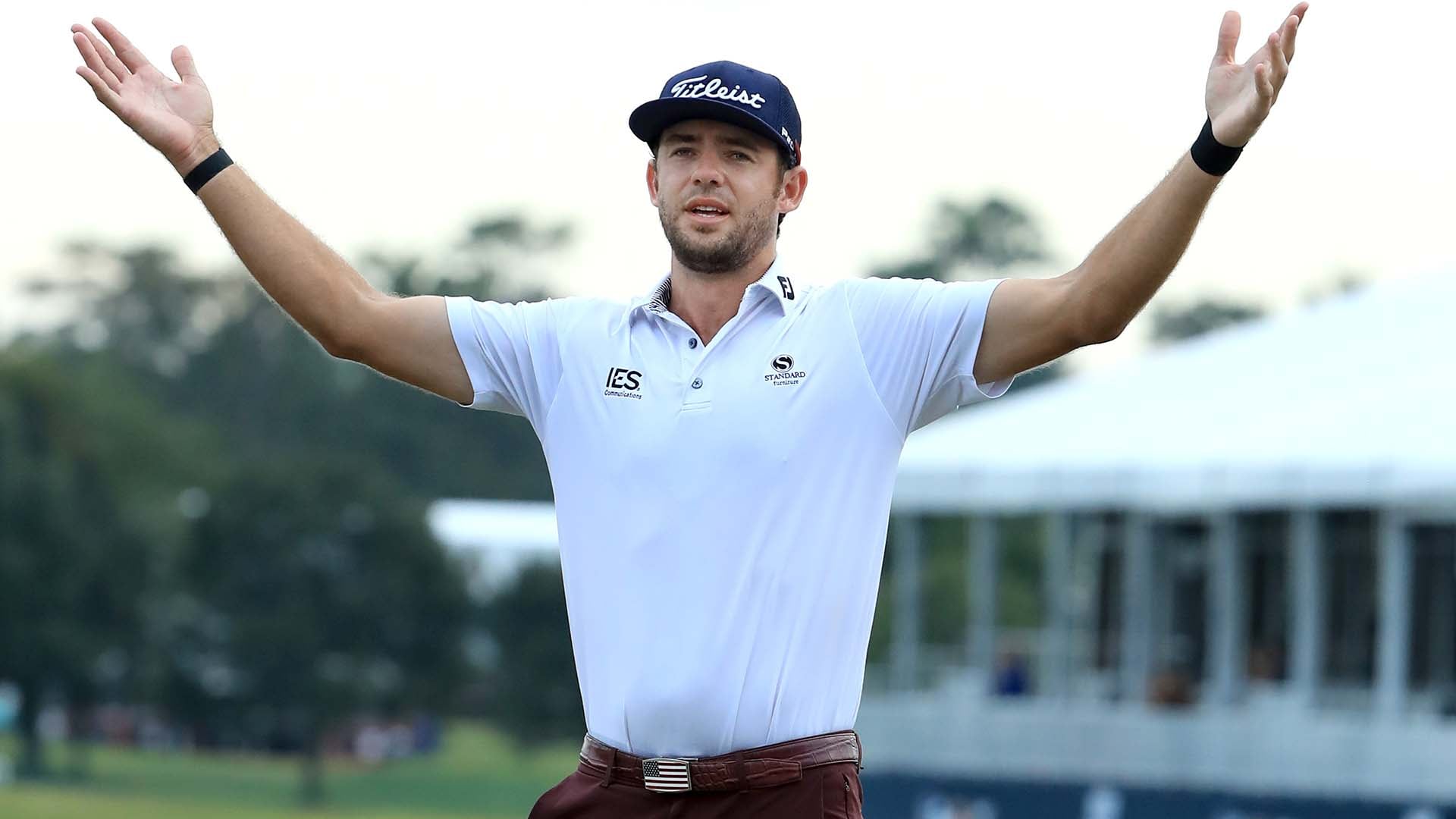 HUMBLE, Texas – Steve Prater remembers the day well. It was 2000, and as the head pro at Blacksburg Country Club at the time, Prater was alerted by a club employee that one of Prater’s students had lost his father that morning.

When Prater walked into the bag room, he saw 12-year-old Lanto Griffin with tears in his eyes, grieving.

“He ran over to me, and we hugged for quite a while,” Prater told GolfChannel.com. “After that, I went straight to the general manager and told him, ‘We have to take care of this kid.’”

Later that day, Prater called Griffin to extend an honorary membership to the club that Griffin said, back then, “felt like Augusta National.”

Now 31, Griffin will soon get to play the real thing.

Some 19 years after that day, Griffin sunk the winning putt on the final green to win the Houston Open, not only capturing his first PGA Tour victory but collecting numerous spoils, including an invitation to the Masters next April.

“Just thinking about it is an absolute joke to me, that I’m going to be there,” Griffin said Sunday after his one-shot victory over Mark Hubbard and Scott Harrington. “There’s so many different things that I can’t even fathom that are going to happen after this week.”

During his winner’s news conference, Griffin revealed his list of goals for the season. After reading them off, one by one, he realized that he had accomplished nearly all of them.

Play in the final group on a Sunday? Check.

“What I do is I set realistic goals, and then I like to achieve them and then set new ones,” Griffin said. "For me, after I play well, it makes me more hungry to play better.”

Prater saw that fire in Griffin immediately. It’s the reason why he let a young Griffin attend his junior clinics at Blacksburg. Only members were allowed to participate, but Prater knew Griffin had the potential go far.

“We had a lot of kids,” Prater said, “but Lanto was one of the few who believed he could do it.”

Griffin didn’t come from a golf family. His parents were “hippies" who named their son after a spiritual lord, and his dad, Michael, managed a health-food store in Blacksburg.

“We didn't have a whole lot, but we had everything we needed,” Griffin said.

When Griffin was 8, his dad, despite no golf interest of his own, bought him a half-set of clubs for Christmas: a 3-wood, 5-iron, 7-iron, 9-iron and putter. Those sticks got put to good use most days at Blacksburg Municipal, a 2,700-yard, nine-hole public course less than a mile from Griffin’s home. As his dad became ill with brain cancer, Griffin quit other sports and focused on golf because he didn’t have to rely on his parents for rides to the course. He could walk to “The Hill” and play for less than $10 a round.

Shortly before his death, Michael gave his son a lift to Blacksburg Country Club for his first lesson with Prater. That day, Prater changed Griffin’s grip.

“He had a little body but these big hands,” Prater recalled. “His grip was way too strong.”

Prater later taught Griffin more than golf; he became a second father to him. After his dad died, Griffin would spend many nights at Prater’s home and became close friends with Prater’s son, Jack, who was a few years younger than Griffin but shared an equal love for golf.

“If Steve didn't bring me in at that real vulnerable part of my life, then there's no chance that I would be playing golf in college,” said Griffin, who lettered four years at VCU, “or obviously winning the Houston Open.”

On Saturday, as Griffin slept on a one-shot lead, Prater, who now shares instructing duties with Todd Anderson, texted his pupil.

“Are we having fun yet?” Prater said to Griffin.

Sunday would be Griffin’s first time in the final group on the final day of a PGA Tour event. He had yet to post a top-10 in 32 career starts, though he had begun this season, his second on Tour, with four straight finishes of T-18 or better.

Strangely, when Griffin stepped on the first tee at the Golf Club of Houston on Sunday, he was completely calm.

“I was actually battling my own mind how calm I was and how big of a moment it was for me, but I wasn’t nervous,” Griffin said. “I was almost trying to tell myself, ‘You should be nervous.’”

Added Hubbard, the other half of Griffin’s twosome: “For two guys who have never won before, I thought we handled ourselves amazing.”

Griffin birdied the first hole and added three more on the front nine. Even after losing his lead with a bogey at the par-4 11th, his belief never wavered. Facing a 33-foot birdie putt at the par-3 16th, he called his shot.

“He told me he was going to make it, and he did,” said Griffin’s caddie, Chris Nash.

Two holes later, Griffin left himself a 60-footer for birdie at the last. After running his first putt about 6 feet by, he thought back on his last victory, earlier this year on the Korn Ferry Tour, when he holed a similar putt to win.

“I felt really good over it,” Griffin said. “That's a memory that's going to be ingrained in my head, seeing that putt go in.”

When the winning putt fell, Griffin, who closed in 3-under 69 to finish at 14 under, dropped his putter and raised both hands in the air. He then crouched down just off the green and, as Hubbard putted out, broke down.

He’d been through a lot. His dad died before he could become a teenager. He was rejected by his dream school, Virginia Tech, and then went winless in college. He turned pro in 2010 and spent years losing money on the mini tours, running up nearly $30,000 on credit cards at one point.

Even after breaking through and winning on the PGA Tour Latinoamerica in 2015, Griffin didn’t reach the Korn Ferry Tour until 2017. In his first 10 starts, he made just $4,800.

“I thought about quitting,” said Griffin, whose biggest check cashed up until then was the $17,000 he earned when he caddied for friend Willy Wilcox at the 2014 Greenbrier.

It wasn't the first time. Luckily, Griffin has always had a great support system to keep his dream alive – both financially and motivationally. Later that year, Griffin won in Nashville, a victory that propelled him to his first PGA Tour card. He lost that card after one year, but his second KFT win earned him another trip back to the big tour – and set the stage for Sunday’s winning moment.

“This is going to be a week that I'll never, never forget regardless what happens the rest of my career,” said Griffin, who spends these days as a member at TPC Sawgrass and living comfortably in Ponte Vedra Beach, Florida. “I feel very fortunate beyond words.”

Added Rafael Campos, Griffin’s college teammate, who tied for 59th in Houston: “For him, knowing everything that has gone on in his life, he deserves it.”

Few understand that better than Prater. Watching the finish on television from back in Virginia, Prater couldn’t contain his emotions.

“When that putt went in, my head hit the ceiling,” Prater said. “It’s been such a long, hard road, and he’s worked so hard.

“I knew it was going to happen.”

Prater only wished he could've been there to give Griffin another hug. 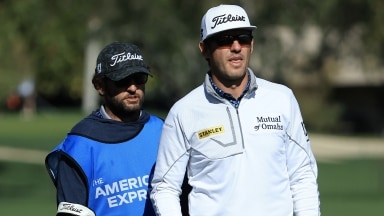 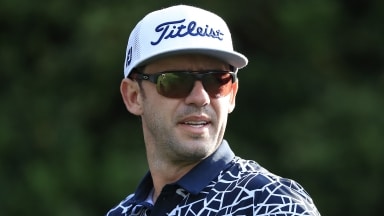