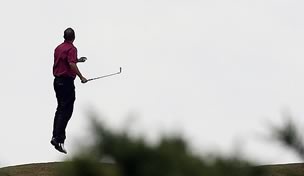 Anyone can pick a few professional golfers to find their way onto the leaderboard on any given week. Or as yours truly proved during last year’s fantasy golf season, anyone can repeatedly pick a few to underachieve every single week.

Short-term predictions are one thing, but long-term ones are a whole different animal, requiring a little more insight and a lot more research. Here’s hoping I’ve got some of each.

Welcome to this year’s edition of The Leap in which I’ll pick players to jump to a previously unforeseen level in their careers. Last year’s predictions were a mixed bag, with dead-on calls regarding Jason Dufner and Branden Grace, but a regretfully poor choice in taking Sergio Garcia to win a major. (Wait, that didn’t happen … right?)

This year’s predictions feature an eclectic mix of veterans and rookies, names you know and names you don’t. They’ll each be making a major leap in their careers in 2013. If not, well, I’ll just have to try again next year.

Despite four career victories and a FedEx Cup title two years ago, Haas the younger has never finished better than 12th in 13 career major starts. That changes this year. Wins at East Lake and Riviera prove he’s got the mettle to compete on big-time courses and while this may not be the year he avenges his father’s career-long winless major streak, it will be the season he shows that he’s good enough to get himself onto a late Sunday leaderboard at any of 'em.

There are two ways to look at Van Pelt’s career: He’s either a classic overachiever based on a PGA Tour-leading 15 top-10 finishes in the past two seasons or a classic underachiever because of a wealth of success that has translated to just one official victory. With unofficial late-season wins in each of the last two years, the official ones may only be a matter of time – and with them will come a major jump in OWGR status. That said, he won’t need a huge boost, already at 22nd in the world entering the year.

Of the 16 players who have won official tournaments in each of the last two seasons, perhaps none is more unheralded than Piercy, who followed his 2011 Reno-Tahoe Open win with a Canadian Open triumph last year. What’s to like so much? Start at the end. He finished fifth last season in final-round scoring average. Out here on the thin limb, let’s pick him to win at least two titles – and don’t be shocked if the first of those happens at this week’s Hyundai Tournament of Champions.

When it comes to potential International team members, the global job search usually stretches to such locales as Australia, South Africa and all of Asia. This year, though, captain Nick Price will be keeping a careful eye on this Canadian, who after myriad injuries posted three top 10s on the PGA Tour last season. A long hitter, DeLaet may be poised to break through with his first victory soon, which should firmly plant him on the radar screen for the end-of-year competition.

It wasn’t so long ago that Streelman was looping at a few country clubs to help offset expenses from playing mini-tour golf. That type of background will help develop a pretty strong resolve in a player, and the Duke University product has shown a propensity for playing some of his best golf on Sunday afternoons. After a self-proclaimed “transition year” in 2012, expect it to translate into his first career title this season.

Armed with one of the sweetest swings on the PGA Tour, the 21-year-old enjoyed a breakthrough season last year, with 13 top-25 results in 28 starts. He made it all the way to the third of four FedEx Cup playoff events and had success in two of them – T-13 at the Deutsche Bank Championship and T-16 at the BMW Championship. All of which should bode well for his chances to reach the field at East Lake this year, an obvious goal for any young player, because it also comes with an invitation to the Masters.

The Leap: PGA Tour rookie of the year

One of List’s usual golfing buddies calls him “one of the most talented players I’ve ever seen.” That wouldn’t sound like much until you consider that his buddy is Keegan Bradley, who plays against some pretty decent talent on a weekly basis. As proof, List posted a victory and three other runner-up finishes on the Web.com circuit last year to earn his first trip to the big leagues. Tour courses should suit a guy who averages 323.5 yards per drive – yes, that’s not a misprint – and finds the fairway 57 percent of the time.

As college teammates and current housemates, the PGA Tour rookies kept their cards together last year, too, as English finished 79th on the money list with Harman not far behind at 87th. They’ll stay attached this season, as well, if not off the course then at least in the standings, as both are primed for a jump into the top 50 on the final money list in their sophomore campaigns.

A few years ago, two PGA Tour players teed it up in a friendly game with a college kid. Easy money, right? Not exactly. The kid was Hoffman, who calmly made so many eagles and birdies that one of the pros took to calling him Drago after the fictional boxer of “Rocky IV” fame. Well, he’s all grown up now. Without initial status on the Web.com Tour last year, he posted seven top 10s in just 13 starts to earn a PGA Tour promotion. Now that he’s there, expect similar consistency, which should allow him to keep his job for many years to come.

Simply competing in a World Golf Championship event may not sound like much of a stepping stone, but for a player ranked 1,401st in the world at this time last year, it’s a monumental leap. Now up to No. 79, last year’s three-time winner on the Challenge Tour is climbing by the week, thanks to a runner-up finish already at the Alfred Dunhill Championship. A few more like that and he’ll be teeing it up with the big boys pretty soon.