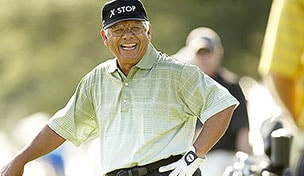 Let’s all just be thankful Lee Trevino was kind of a busy man in 1996, and that Adam Sandler wasn’t yet instantly associated with curse words and crude gags. It was that perfect storm that led to Trevino’s involvement in the cult-hit 'Happy Gilmore,' and without it, the movie may not have evolved into what it is today – one of the most awesomely bad movies of all time.

Speaking about education at the UT Tyler 2013 Patriot Golf Classic, the most interesting nugget Trevino let slip was when the topic of his cameo in the film came up. The six-time major winner said he wished he had read the script first.

'If they were going to use all those foul words in there, I never would have done it,' he said.

His simple head shake is featured in multiple scenes throughout the movie, and he even utters the classic line, “Grizzly Adams did have a beard” in the clip below – complete with some of the milder language that he obviously disapproves of.

Sadly, it sounds like this is the last we've seen of Trevino in one of Sandler's flicks, which is unfortunate because the only head shaking happening during his recent efforts ('Jack and Jill,' 'That's My Boy,' 'Grown Ups,' probably 'Grown Ups 2'), is coming from the audience.