The long road: Mickelson's defies the odds and Father Time 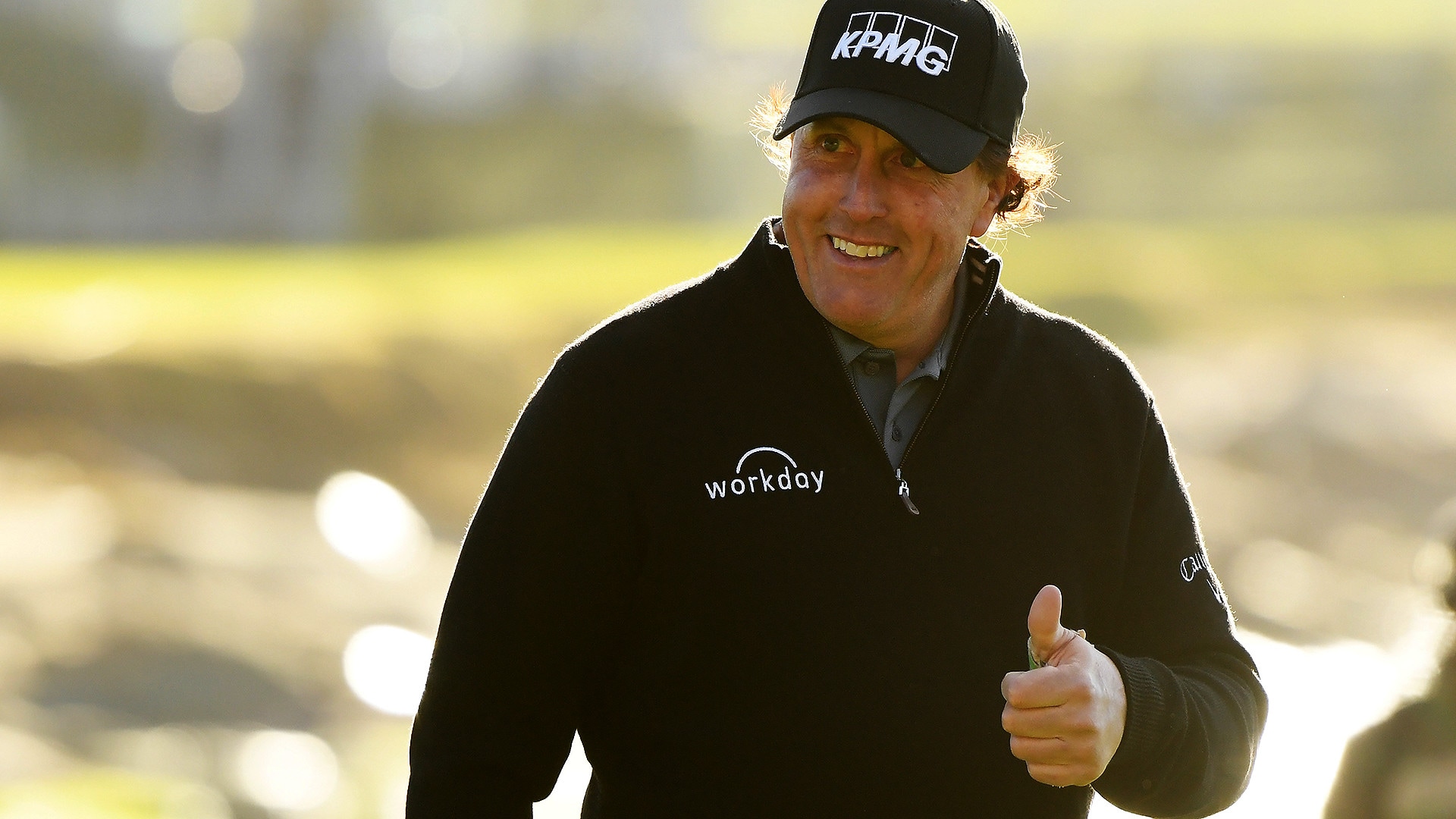 So good for so long, Phil Mickelson’s legacy is still partly defined by what he didn’t accomplish. That he didn’t win his first major until he was 33. That he never reached world No. 1 or won Player of the Year. That he never captured that elusive U.S. Open and never became a true rival to Tiger Woods and never performed well at the Ryder Cup.

All true, but that cynical view overlooks the most impressive aspect of Lefty’s legacy: Has anyone ever been an elite player longer?

With his victory Monday at the AT&T Pebble Beach Pro-Am, Mickelson is now entering Sam Snead-level longevity, owning the fourth-longest gap (28 years, 1 month and 2 days) between his first and most recent wins.

Five of the top 10 players in the world right now are 28 or younger. That means Mickelson has been collecting trophies longer than his chief competition has been alive.

Raymond Floyd holds the Tour record for the longest [trophy] shelf life, at 28 years and 11 months, but there was a flukiness to that final win, collecting it after a nearly six-year drought. Same with Davis Love III, who waited almost seven years before his last title. Snead is second on the list, and he remains the benchmark for aging warriors everywhere – he’s the Tour’s all-time wins leader (82) and the oldest Tour winner ever (52 years and 10 months), a record that, someday, if he remains healthy, Mickelson seems destined to topple.

Sure, equipment and fitness have allowed players to stay better longer, but his predecessors never faced the obstacles that Mickelson does now: a bevy of challengers who are younger and fitter and deeper than ever before, to say nothing of his own medical issues, after being diagnosed with psoriatic arthritis in 2010.

And yet Mickelson has still held his own, a testament to not just his otherworldly talent but also his resourcefulness and drive – he’s remained motivated despite having a Hall of Fame career and more than $90 million in on-course earnings. He’s lived inside the top 50 in the world rankings for a record 25 consecutive years, never falling out because of a dip in form or an off-course distraction, because of an injury or a swing change.

To explain how he’s stayed at the forefront of the game for three decades, Mickelson pointed to two skills that typically deteriorate as players age but that he has actually improved: putting and swing speed.

Since switching to the claw putting grip in 2012, Mickelson has become a better, more consistent putter than he’s ever been. Last season he ranked 13th on Tour, exceedingly rare for a player of his vintage.

His tee balls remain a work in progress, of course, and he’s the first to admit that he’ll never be an elite driver. Even during one of the best years of his career, in 2004, Mickelson still ranked 121st in driving accuracy. That’s his best ranking since the Tour started keeping statistics that year, and since then, he’s never been better than 140th. (Currently, he’s 220th.) It’s never been his strong suit, despite the overflowing optimism each January that he’s found a driver that he can keep in play.

And so, in the absence of accuracy, Mickelson has embraced a new philosophy: “If you’re going to be crooked off the tee,” he said last week, “you sure as heck better be long.” During the offseason he overhauled his diet and workout routine, and he underwent biometric swing studies that pinpointed areas of weaknesses. That resulted in a 5-to-6-mph bump in swing speed that has allowed him to hit a reliable cut off the tee and, entering last week, rank fifth in driving distance, at 315 yards a pop.

The challenge will be maintaining that 121-mph swing speed during a long season, but so far the results are undeniably impressive: At the Desert Classic, in his first event of the year, he blasted driver, shot the second-lowest 54-hole score of his career and lost on the 72nd green. At Pebble, he hunted down Paul Casey with exquisite iron play, only 25 putts in the final round and an extra gear off the tee. During the third round, while trying to keep pace with Casey, he hammered a drive over the dogleg on the downwind, par-5 14th – his ball speed: 184 mph – that left him just a 4-iron into the green. He hit a laser to 4 feet for eagle.

“It’s a lot more work and effort to play at this level,” Mickelson said Monday, “so it’s very gratifying to see the results and to finish it off the way I did.”

There’s some truth to the old adage “long swing, long career.” Like Snead and Vijay Singh before him, Lefty’s long, flowing swing has produced a high launch and taken the strain off his back, allowing him to achieve a level of sustained excellence that not even Jack Nicklaus or Tiger Woods could reach.

But Mickelson’s magic extends beyond his rhythmic swing, or his unassailable self-belief. Even as he approaches 50, he’s still searching for an edge, whether it’s flexibility exercises or biometric studies or an exotic coffee blend that apparently wards off head colds. The chase keeps him engaged. The results keep him inspired.

His stated goal of 50 Tour wins seemed like a pipe dream, but maybe not anymore.

Mickelson possesses the rarest trait in all of sports.