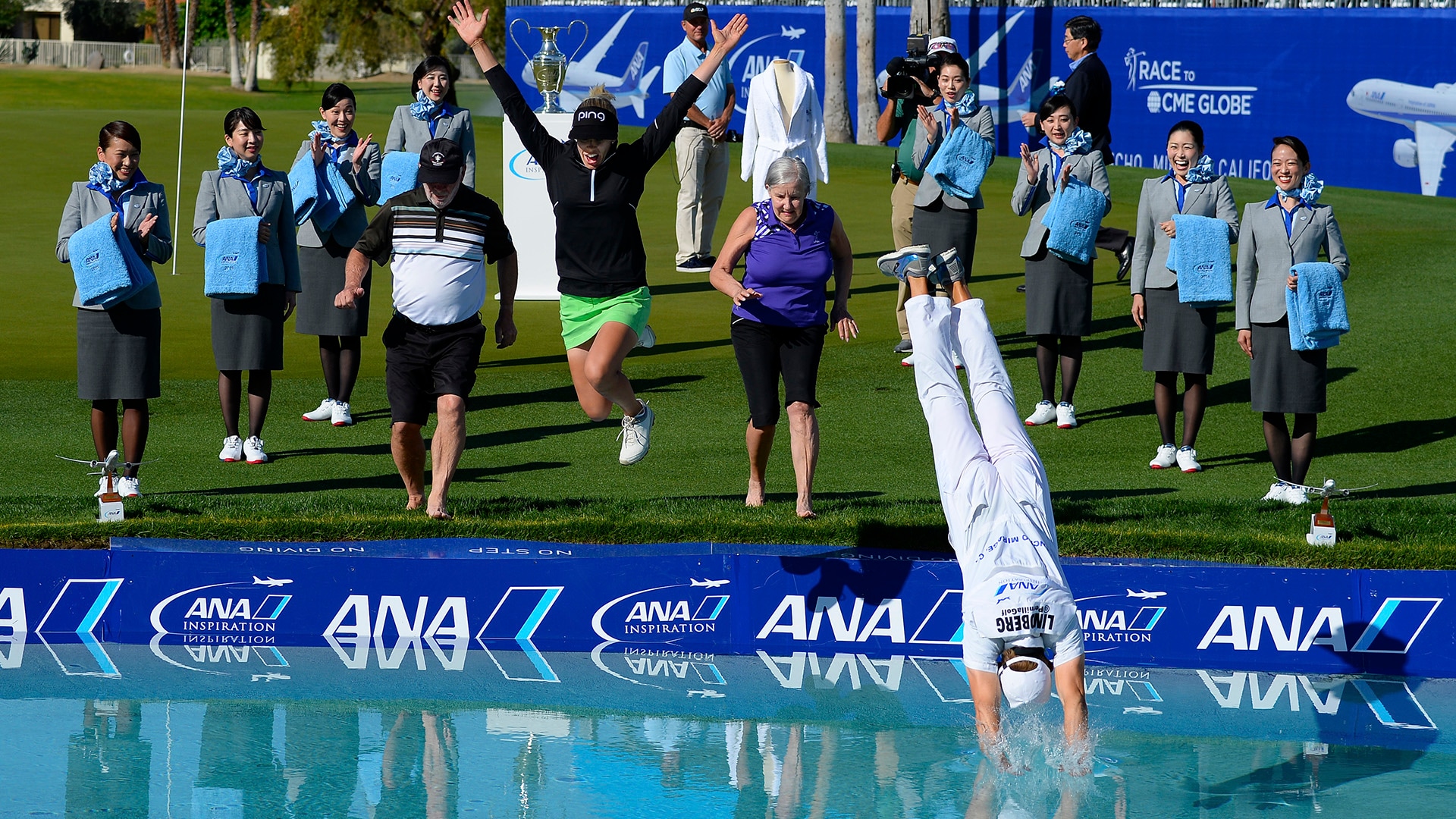 So many memories are packed into 49 years of history at the ANA Inspiration.

There will be more added to the treasury of golden moments this year, just not this week.

Traditionally the year’s first major, the ANA Inspiration was supposed to be underway by now, with practice rounds and pro-ams preceding Thursday’s start to the championship at Mission Hills in Rancho Mirage, California.

But the coronavirus pandemic has moved the start back five months. It has been rescheduled for Sept. 10-13.

If you’re missing “The Dinah Shore,” which is how so many of the game’s legends still fondly remember the championship, here’s a look back at 10 of the most memorable moments in the event’s history, some as painful as others were exhilarating: 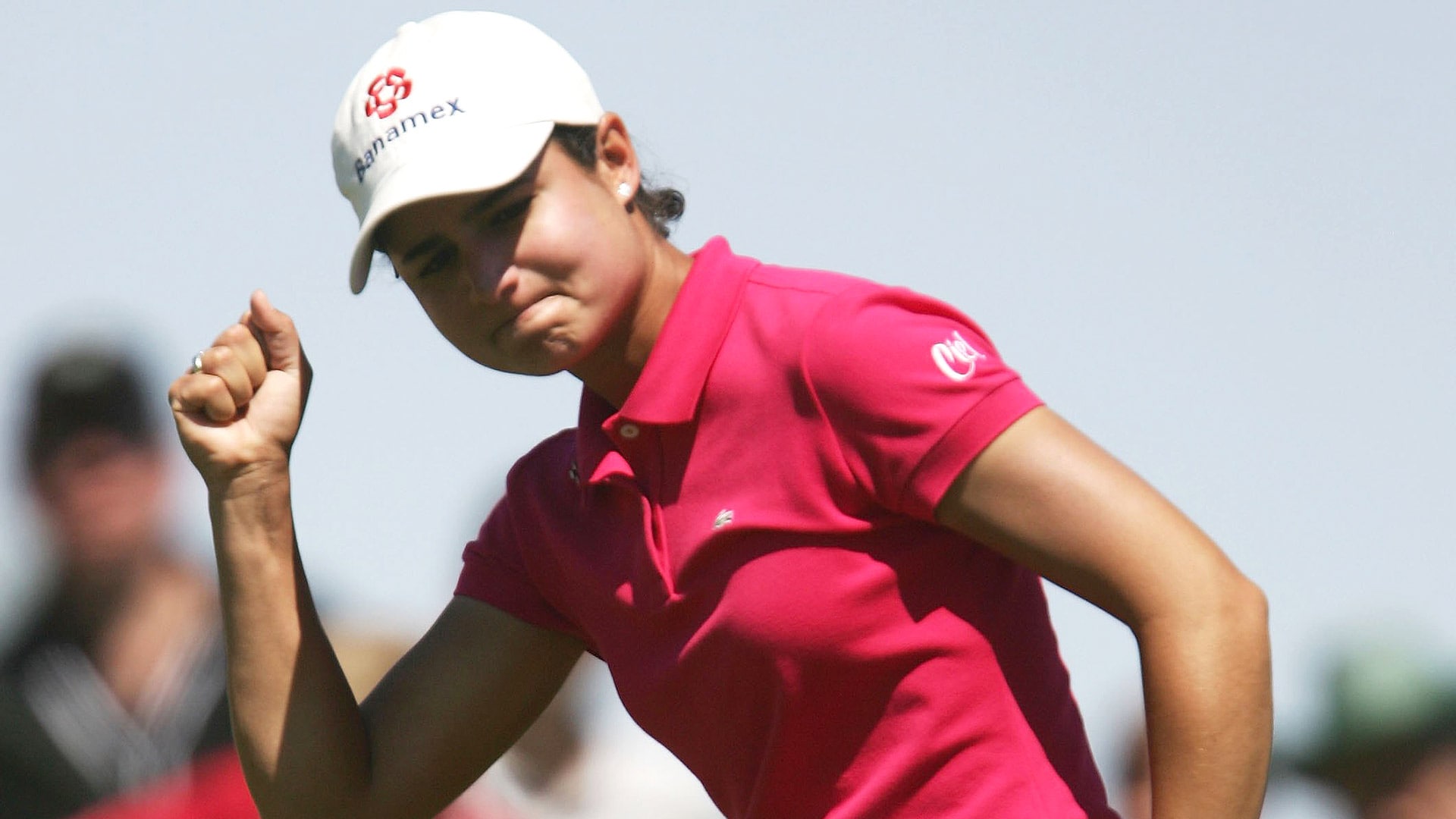 Lorena Ochoa, still on her way to becoming the game’s top star, opened with a 10-under-par 62 in 2006. At the time, it equaled the lowest score ever posted by a man or woman in a major.

This was on a day when the average score was 73.7, when the world’s No. 1 player, Annika Sorenstam, opened with a 71. Alas, Ochoa would have to wait two more years to win the championship, with Karrie Webb winning in ’06.

Five years later, Kim broke through all the pain that little miss caused, winning her first major at the Women’s British Open.

“I feel finally in peace,” she said.

Lexi Thompson was in command, pulling away on Sunday on the back nine in 2017 – and then a rules official approached her on the way to the 13th tee. Thompson was informed she was being assessed a four-shot penalty based on rules violations from the day before, with a television review showing she didn’t properly return her ball to its mark on the 17th green in Saturday’s third round. An email led the LPGA to do the review, with Thompson getting docked two strokes for the improper ball placement and two for signing an incorrect scorecard.

Wham. Thompson went from two shots ahead to two shots behind.

Thompson hit her next tee shot through tears and still nearly came back to win. She forced a playoff, but ultimately lost to So Yeon Ryu. 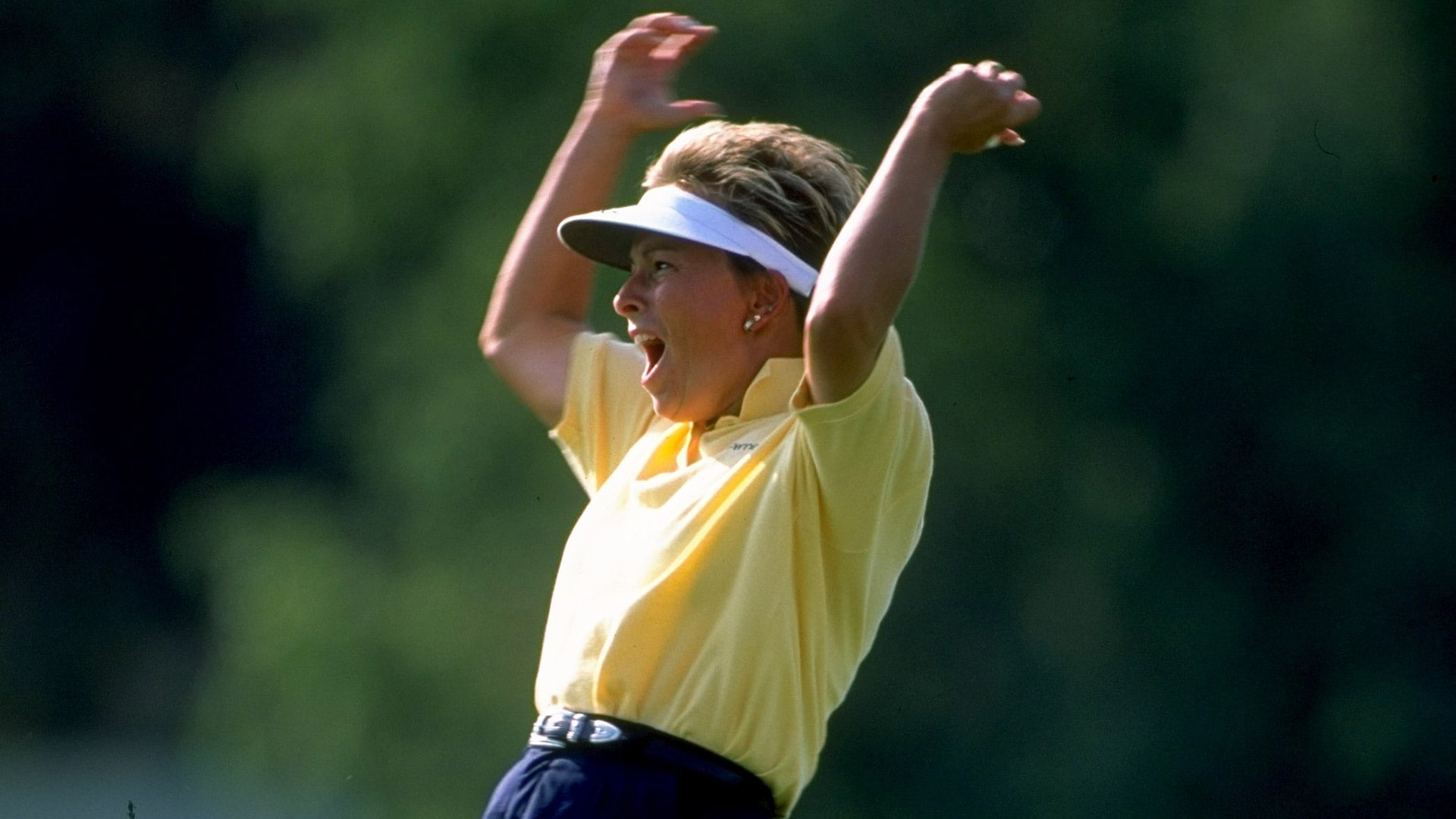 7. Pepper runs up the score

Dottie Pepper claimed her second title in this championship in a rout in 1999, with her 19-under total a record-low score at the time in a major. She beat runner-up Meg Mallon by six shots.

“Dottie is proof that you can will things to happen” Mallon said. 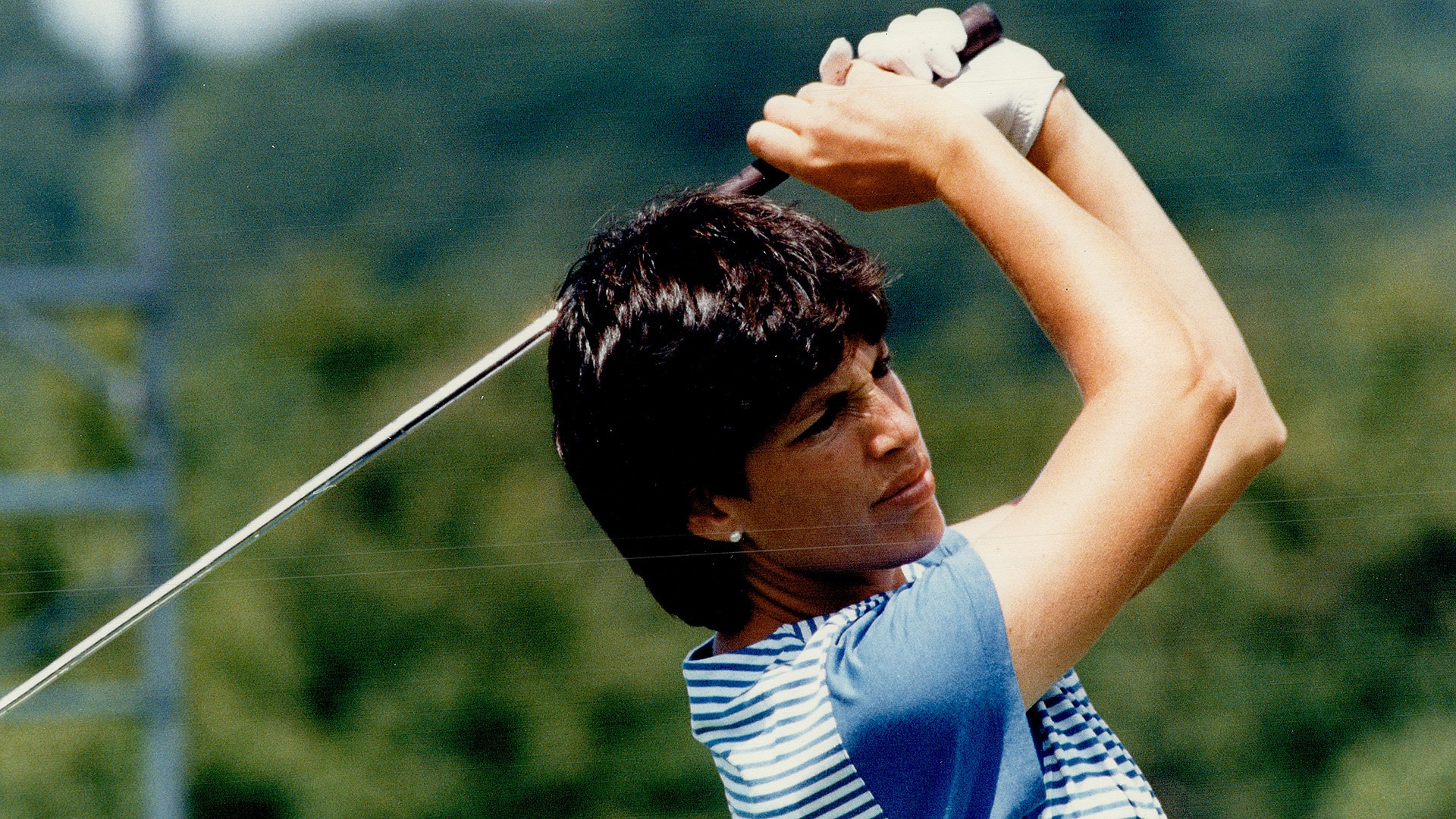 Julie Inkster birdied the last hole in regulation in 1984 to tie Pat Bradley, the tour’s leading money winner at the time, and then she beat Bradley in a playoff. Inkster, just 23 at the time, was coming off three consecutive U.S. Women’s Amateur titles before turning pro. She won her second major, the du Maurier Classic, three months after winning in Rancho Mirage and later was named the tour’s Rookie of the Year.

Brittany Lincicome said her heart was racing as he came down the stretch in 2009, but nobody could tell given the way she played the 72nd hole. She hit a hybrid from 210 yards to 4 feet, then made the eagle putt to win her first major, beating Cristie Kerr and Kristy McPherson by a shot.

“My hands were shaking so badly, I was almost crying,” Lincicome said of that last putt. 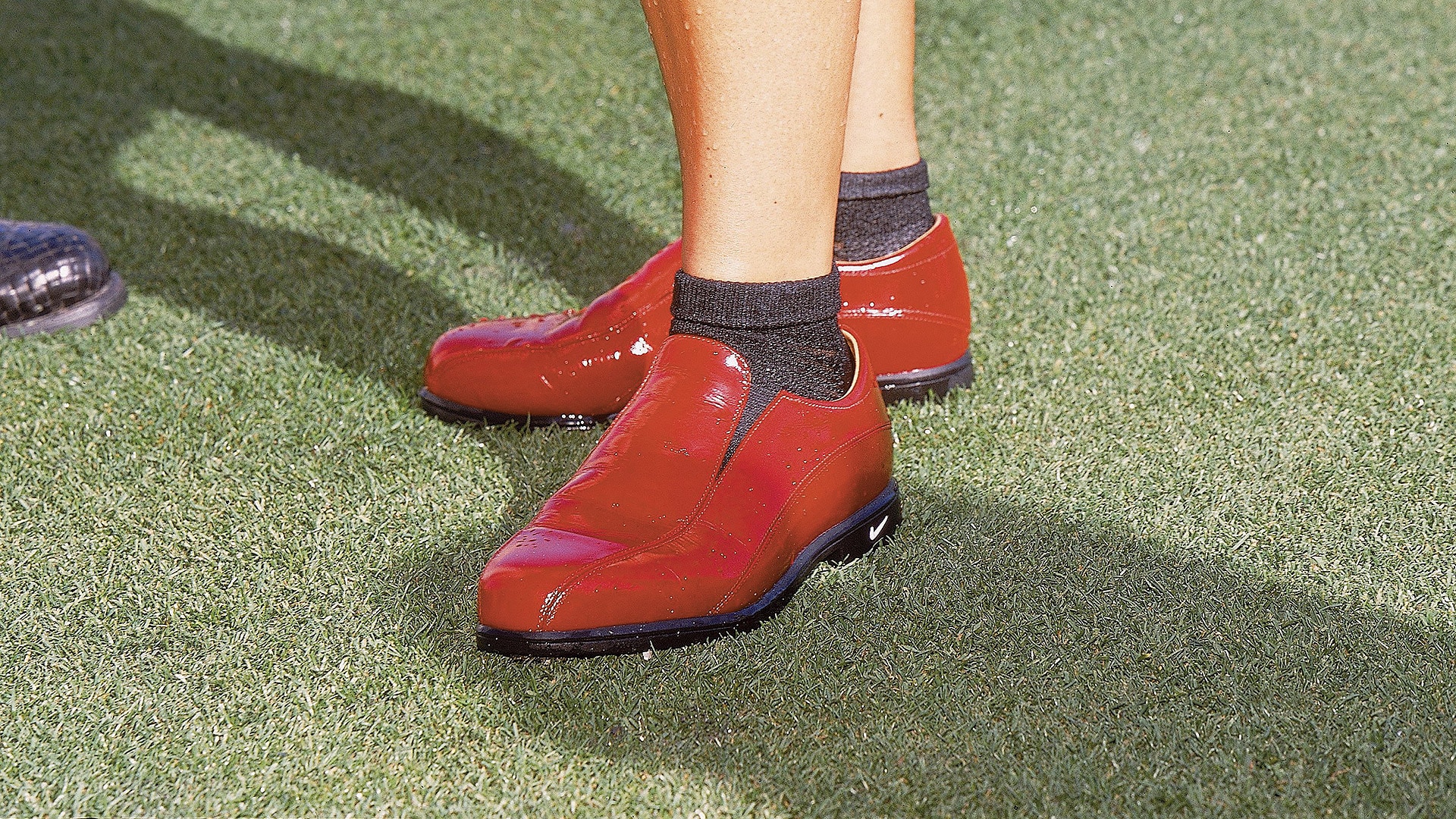 Annika Sorenstam broke out a pair of red, high-gloss Nike golf shoes in successfully defending her title in 2002. She’s still the only player to win the championship in back-to-back years since it became a major in 1983. She beat fellow Swede Liselotte Neumann by a shot to claim the fourth of her 10 major championships.

“Every time I stood over a putt, I saw these little red toes, and it made me smile,” Sorenstam said.

Pernilla Lindberg pulled off one of the great upsets not just in the history of this event but in the history of majors. In 2018, the 31-year-old journeywoman from Sweden prevailed in one of the ANA's most dramatic finishes, holing a 30-foot birdie on the eighth sudden-death playoff hole to beat Inbee Park, who will go down as one of the game’s greatest players, in a Monday restart.

Lindberg was No. 95 in the Rolex Women’s World Rankings.

“I’m a grinder, and I just felt: ‘This is mine. I’m going to do this,’” Lindberg said. “I just knew I could, and I just kept fighting away. I couldn’t believe when that last putt went in.”

Seven shots back at day’s start, Karrie Webb completed her comeback in unforgettable fashion in 2006. She holed out from 116 yards for eagle on the final hole of regulation to force a playoff that she would win.

“When it dropped, I nearly had a heart attack,” Webb said.

Webb beat Ochoa with a birdie on the first extra hole. The day was filled with drama beyond Webb’s finish. Ochoa, who had squandered a 54-hole lead, came back to knock a 5-wood to 6 feet at the end of regulation, making the eagle putt to force the playoff. Michelle Wie, just 16 at the time, lipped out a birdie chance from 10 feet at the 72nd hole that would have gotten her into the playoff.

It was the last of Webb’s seven major championship victories.

No, it came in an inspirational whim moments after she claimed the second of her three titles there in 1988. After sealing the victory, she turned to her caddie and said, “Let’s jump in the water.” She and Bill Kurre did just that to the delight of the gallery.

“I didn’t have any clue what I was starting,” Alcott said. “It was just a moment where I was embracing my happiness.”

The tradition took a little while to take hold, but after Alcott won in 1991 and leaped into the pond yet again, the victory leap was established. She took that second dive with championship host Dinah Shore.

Alcott forever gets credit for inventing the most iconic custom in the women’s game. 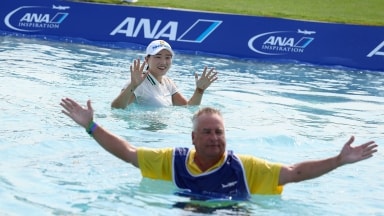 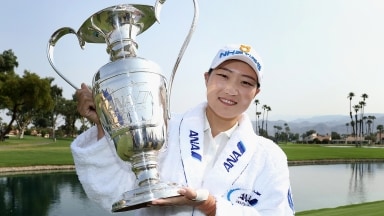 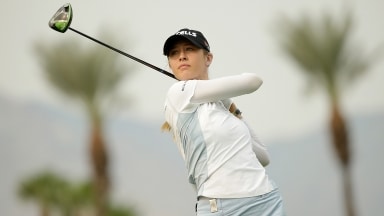