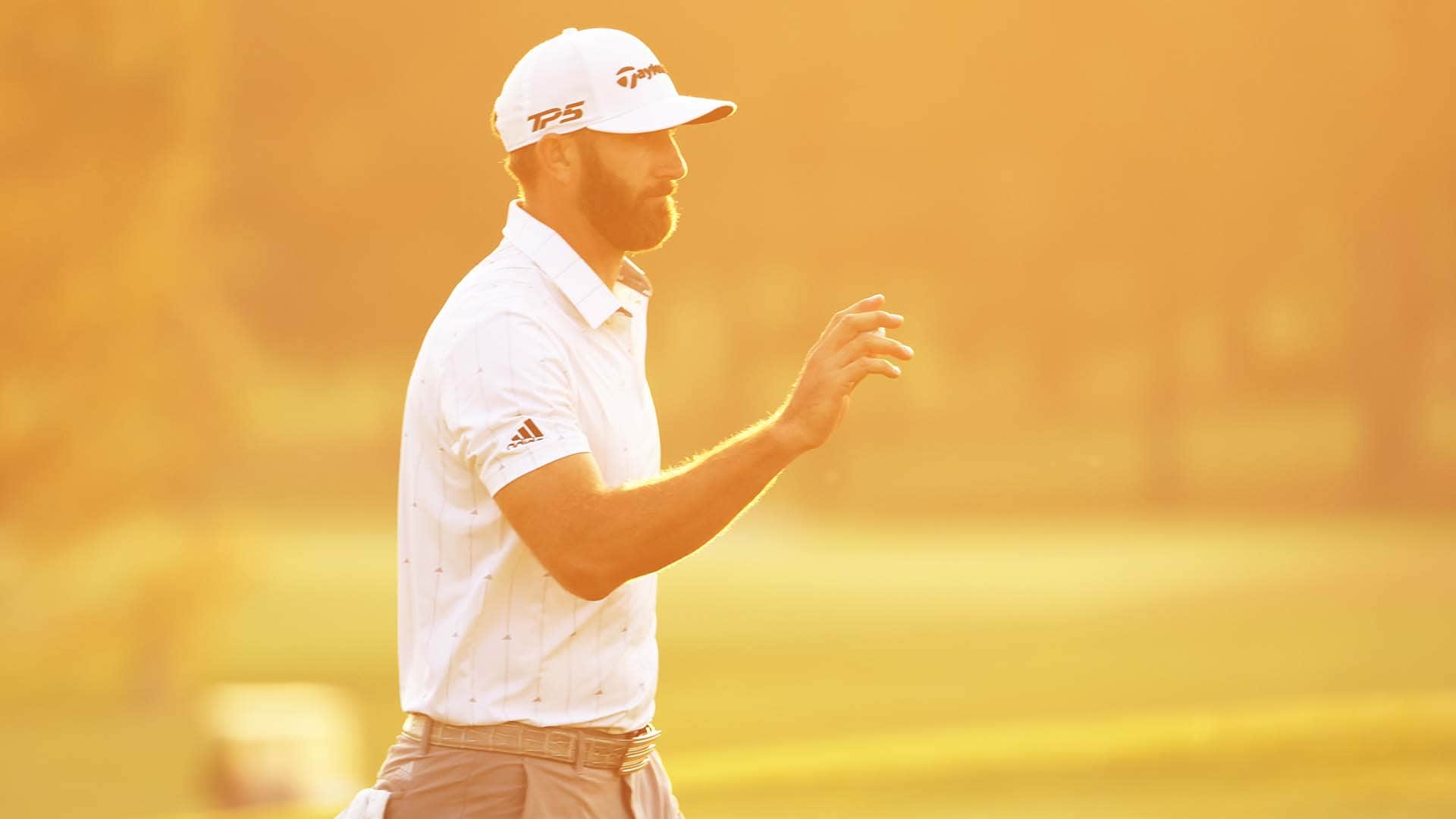 AUGUSTA, Ga. – On this college football Saturday in the South, here’s a terrifying sight: Dustin Johnson surging out of the pack and into the open field, with nothing but daylight ahead of him.

After tying the 54-hole tournament scoring record at 16 under par, Johnson is now four shots clear at this November Masters. No, sorry, not just four shots clear. Four shots clear of a trio of players who has never even sniffed a major title. Johnson’s nearest realistic threat, world No. 3 Justin Thomas, is six back. Second-ranked Jon Rahm, another shot behind, said this of his chances Sunday: “I’ve got to hope to shoot a miracle score.”

And hope he gets some help from Johnson, who has a history of backpedaling in this position.

“But I promise you,” said his swing coach, Claude Harmon III, “he never thinks about that. His philosophy has always been: Just give yourself chances.”

And this particular opportunity has several advantages.

The slower, softer conditions at Augusta National have allowed Johnson to attack flags even with longer clubs, such as the 5-iron he nearly dunked for an albatross on No. 2 Saturday. For this fall Masters there’s a thicker, denser Bermuda/ryegrass mixture around the greens that have taken some of the edge off the course, thus eliminating the scare factor and some of the possible blowup holes.

It’ll help, too, that the final-round tee times have been pushed up nearly five hours because of daylight and CBS’ other contractual obligations. The final group is set to tee at 9:29 a.m. ET Sunday. That’s less time for Johnson to tool around his rental house and ponder the day’s possibilities, of how he’d look slipping into the green jacket.

Also working in his favor is the lack of patrons. On his second nine Saturday there were maybe 200 volunteers, club members and media members following him, as opposed to the 20,000 that’d be ringing every fairway and green if he was staked to a sizable lead on the weekend in non-COVID times. At Augusta National, perhaps more than any tournament course in the world, the players are informed by the roars. But on Sunday, with history on the line, Johnson can la-di-da his way through the final round, piling up birdies to the soundtrack of light applause, the faint buzz of a nearby drone and falling acorns.

Indeed, chasing at Augusta is normally advantageous. Not this year. “There’s nothing to make that moment even harder, to have the buzz, to have the adrenaline, to have a little bit more pressure put on him,” Thomas said. “It’s a really big deal. That would have really played to my advantage or other guys trying to chase DJ.”

With shrieks or silence, it might not matter the way Johnson is playing this week.

He’s carded a pair of bogey-free 65s. He’s found a whopping 87% of the greens. Already one of the longest players on Tour, he hit every single fairway in the third round – a perfect 14 for 14.

Seriously, how are you going to beat that?

“When he plays like this, he’s very, very difficult to beat,” Harmon said. “If this is normal conditions, if there’s fans here, they’d be talking about how this is one of the best performances in the history of Augusta.”

There’s still time to write that history. Johnson needs a 69 or better to set the all-time tournament scoring record. Barring an implosion, he’ll have a record 11 straight under-par rounds at the Masters.

“If I play like I did today,” he said, “I think I will break that streak.”