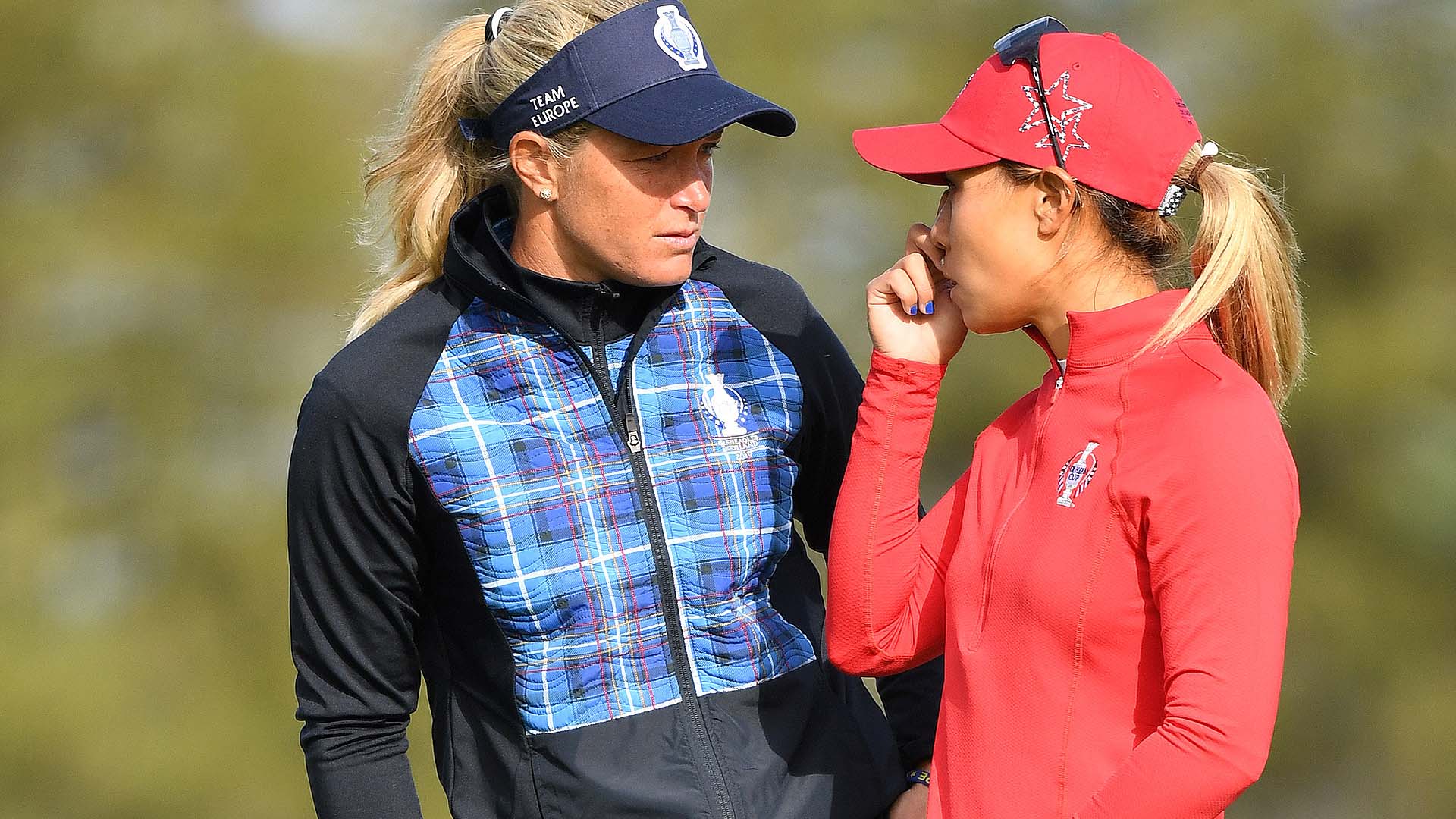 Suzann Pettersen stepped on her neck.

Yes, Kang was having some fun being hyperbolic in explaining earlier this week how the joy of Solheim Cups is “trying to take souls,” make opponents “cry” and “just crush the other team.”

And yes, Pettersen was having fun when she responded in kind, saying the Europeans were going to have to step on some necks.

And yes, media types blew it out of proportion, but once the day ended you couldn’t help but wonder if Kang might need a shaman priest and a physical therapist.

You wondered if she needed treatment for a spiritual ache and a sore neck.

The European duo teamed to defeat Lizette Salas and Kang, 4 and 2, in the opening day’s most scrutinized match.

The rout helped the Euros seize the lead, 4½ souls to 3 ½ souls.

Yes, Europe took one more soul than the Americans.

OK, maybe that’s over the top, but if Kang can take some playful liberties to make the Solheim Cup more fun, so can we.

Of course, she doesn’t need a shaman priest. Her spirit probably got all the boost it needed watching the brilliant finishes teammates Lexi Thompson and Brittany Altomare delivered at day’s end to keep these matches tight.

The Euros might have won the day, but the Americans won momentum at day’s end, and that might win Saturday for them, or maybe lead them to win the whole thing.

That’s how important Thompson’s and Altomare’s late birdies were.

The Americans were trailing going to the last hole in the final two matches of the day, looking as if they were going to go to sleep trailing by 5½ to 2½.

Instead, teaming with Jessica Korda, Thompson rolled in a 15-foot birdie at the last to halve their match with Carlota Ciganda and Bronte Law.

And moments later, teaming with fellow rookie Nelly Korda, Altomare rolled in a 25-foot birdie at the last to halve their match with Charley Hull and Azahara Munoz.

“It looked like we were going to lose two points,” Inkster said. “So, two huge half points.”

“You can’t teach that,” Inkster said of those clutch finishes. “It’s just in your belly. I’m just so impressed.”

Kang took to Twitter to applaud her teammates after play ended.

She also expressed her frustration over how her Golf.com podcast comments were used. She is one of the most colorful quotes on tour, and she says she likes being the center of attention, but she doesn’t like this.

“Dear people that are upset,” Kang tweeted. “Golf.com comment was about how [so] many players feel about match play. Now if that was [taken] of context, oh well . . .”

Kang actually never said she was coming to Europe to steal souls and make opponents cry. She was intentionally over the top, trying to explain how dramatic these team matches can feel to the players who are in them. Her mistake was in failing to understand the nature of team events on a world stage, how bulletin-board quotes are such a part of the dynamic.

The first time the U.S. team went to Scotland for a Solheim Cup in 1992, Golf Digest quoted her saying every American on the U.S. roster would make the Euros better, but only two Euros could play for the U.S. team.

The Euros rode her quote to the biggest upset in the history of this event.

“Our players are hell-bent on seeing Beth Daniel eat her words,” European captain Mickey Walker said back then.

Daniel insisted then and still insists today that she never uttered those words.

Kang made it worse saying she was told she was going to be booed in Scotland. Anyone who knows the rich history of golf in Scotland knew that wasn’t going to happen. In fact, saying so might have insulted the Scots more than saying she wanted to take souls.

So, again, Kang really doesn’t need a shaman priest. She’s got Captain Inkster, who probably works more magic than any mystic can.

Inkster was asked if she thought this furor adversely affected Kang’s performance, because Kang really struggled.

“I'll definitely talk to Danielle,” Inkster said. “I talk to her every night. But, I think she's in a good frame of mind. Might have just run into a couple of buzz saws. I watched a little bit of their match. I know they got off to a slow start, bogeying the first hole. But, I'll definitely talk to them, see where they're at, and see if I need to coach them up.”

The best thing for Kang might be avoiding van Dam.

Van Dam, the LPGA rookie from the Netherlands with four LET victories, was terrific. She is the longest tour player in the women’s game, but she showed Kang her all-around skills. She was the total package on Friday.

“I mean, this girl, I think is the best golfer I've ever seen on the women's side,” Pettersen said. “Today, she just was absolutely a rock star.”

She was a soul snatcher. That’s what she was.