Donald opens up on friendship with Jordan 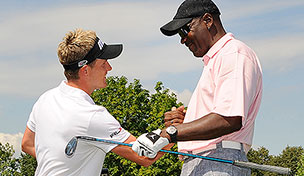 LOS ANGELES – What do you give Michael Jordan for his 50th birthday?

Jordan’s birthday is Sunday, and Luke Donald might want to consider giving him another shot per side in their golf outings down at the Bear’s Club in Jupiter, Fla.

How many shots a side does Donald typically Jordan?

“I usually give him six a side, and that’s usually not enough for him,” Donald said.

After his days at Northwestern University, Donald settled into Chicago and got to know Jordan, who loves golf. Donald recently revealed he enjoys picking Jordan’s brain to unearth any competitive secrets that might help him.

“In no way am I working with Michael, at all,” Donald said. “We literally are just friends. I try to pick up things from just watching him. I ask him some questions and he gives me answers sometimes. Certainly it's not like a working relationship. It's just nice to have access to someone that was that great at his sport.”