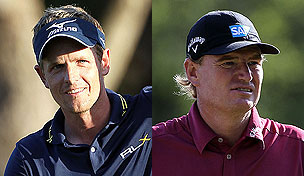 Getty Images
PONTE VEDRA BEACH, FL - MAY 06: Tiger Woods hits a tee shot during a practice round prior to the start of THE PLAYERS Championship on THE PLAYERS Stadium Course at TPC Sawgrass on May 6, 2009 in Ponte Vedra Beach, Florida. (Photo by Richard Heathcote/Getty Images)  -

PALM HARBOR, Fla. – Some golf tournaments are won, others are lost, but rarely does a day loaded with sexy storylines lead to more anguish than the final round of the Transitions Championship, a title claimed by Luke Donald on the first hole of a four-man playoff at Innisbrook’s Copperhead Course.

The victory allowed Donald to regain the No. 1 spot in the World Ranking, unseating Rory McIlroy, who held it for all of two weeks. If you’re among those thrown for a loop by the system’s math, there is no disputing Donald’s most admirable qualities: a supreme level of consistency and the ability to make big putts. Those traits separated him from all others Sunday, as the Englishman fired a final-round 66, then holed a 6-footer for birdie to beat Robert Garrigus, Sang-Moon Bae and Jim Furyk.

Donald’s winning putt was as straight as they get, capping a day full of sharp turns onto the boulevard of broken dreams. Third-round co-leaders Furyk and Retief Goosen were seeking career revivals in their early 40s. The four players immediately behind them had combined for 455 starts without a victory, but Goosen’s back problems eliminated him from the fray right away. Furyk, meanwhile, holed a bunker shot for eagle at the first, then played his next 18 holes in even par.

After needing three putts from the fringe at the 13th, Furyk donated sole possession of the lead to Ernie Els, another household name who hasn’t been the same. Els’ quest for a spot in next month’s Masters has gotten a lot of attention in recent weeks – either he wins or watches it on TV – and when his splendid approach at the par-4 16th stopped 4 feet from the flag, his long-lost pursuit of a green jacket had gone from savory theme to virtual reality.

Alas, Els missed the 4-footer, then sent his tee shot at the par-3 17th into the right trees. He was lucky to have any shot at the green and settled for a bogey, leaving him tied with five others at 13 under. “There was a bit of a wait there, and I lost my rhythm,” Els said. “I hit one bad shot.”

His approach at the 18th was no beauty, an 8-iron from the middle of the fairway that stopped on the front-left fringe. Els chipped to 4 feet and missed again, jabbing his par attempt left, and just like that, a three-time major champion with a somewhat dated history of clutch performances had been felled by his putting woes. “Ernie was playing behind me today, and he was bombing shots,” Donald said. “I’d look back, and he was 50 yards past where I’d hit it.”

Donald’s own ballstriking has improved dramatically over the last 18 months, but it’s his short game that has prompted his climb to the top of the World Ranking. He has led the PGA Tour in putting in each of the last two years. If he isn’t the best bunker player on earth, you can count his equals on one hand, and with a trophy on the line on any given Sunday, his ability to economize strokes can prove invaluable on a closing stretch as tough as Innisbrook’s.

The playoff hole (18th) was a perfect example. Donald drove it into the right rough – Garrigus was in the fairway, 30 yards ahead of him – but the Englishman calculated a 7-iron perfectly, landing it just short and getting the bermuda-topspin bounce. Garrigus knocked a wedge to 7 feet, but a man known more for the length of his putters than the depth of his success burned the left edge.

“I just read too much break,” Garrigus said. “If I made mine, [Donald] might have missed his, first one in and all, but you never know. He’s one of the best players in the world, and he probably wasn’t going to miss that putt, but that’s the way I was thinking.” The final stages of the Transitions Championship, much like that assessment, made perfect sense in a very imperfect world.