Ko off to blistering start in Australia 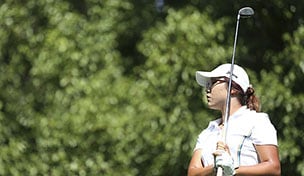 Lydia Ko is hitting shots heard ‘round the world again.

The 15-year-old amateur sensation from New Zealand scorched Royal Canberra Golf Club Thursday with a 10-under-par 63 to take an early lead in the first round of the ISPS Handa Women’s Australian Open. It’s the LPGA’s season opener.

Ko’s remarkable round included 11 birdies, an eagle and three bogeys. Impressively, she did it playing alongside world No. 1 Yani Tseng and Michelle Wie.

“She could have shot 12 or 13 under,” Tseng said in LPGA tweets released immediately after the round. “It was fun to watch . . . We were thinking we may see history today.”

Ko finished five shots ahead of Tseng, 11 ahead of Wie in their pairing. Ko has set herself up for a run at back-to-back professional titles.