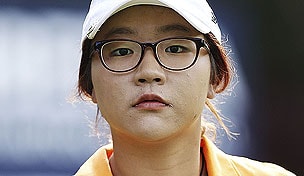 Lydia Ko infuses a dose of intrigue into the LPGA’s season opener in Australia this weekend.

While the 15-year-old amateur sensation appears to be singularly focused on winning the ISPS Handa Women’s Australian Open for her fourth professional title in 54 weeks, there are distractions with larger questions building.

Ko was asked about her future after posting a 4-under-par 69 in the second round that positions her to play in the final pairing Saturday at Royal Canberra. She will tee it up there with Mariajo Uribe, the 36-hole leader at 15-under 131, and with former Rolex world No. 1 Jiyai Shin, who is tied with Ko at 132.

Ko was asked Friday if it’s true she was planning to turn professional next year.

“We really haven’t made decisions yet, so, yeah, I can’t really say right now,” Ko said.

Two weeks ago, on the eve of defending her title at the New South Wales Open, Ko addressed the topic.

Ko’s coach, Guy Wilson, told Fairfax Media he thinks the time will be right in another year. Clearly, the Ko team is weighing options.

“Realistically, she’s probably going to look to turn pro next year, only because the opportunities now are pretty obvious,” Wilson said. “Wasting two years at college could be a disadvantage.”

Ko has left more than $470,000 on the table retaining her amateur status in professional events. She left $300,000 on the table winning the CN Canadian Women’s Open last summer. More than that, though, there’s a question of development at the amateur level. How much is there left to learn playing against amateurs when she’s beating the world’s best pros? As mature and poised as Ko is, there are also considerations about how tour life affects social development.

Ko isn’t eligible to collect the winner’s check this weekend if she wins the Women’s Australian Open. She would have had to declare herself a pro before the event began to collect any winnings.

LPGA rules stipulate that a player must be at least 18 to become a tour member. To gain membership before turning 18, a player must petition the LPGA commissioner for a waiver of the tour’s age restriction.

Thompson and Wie both played the LPGA as non-member pros before earning membership status. Thompson became an LPGA member when she was still 16, after petitioning for a waiver following her victory at the Navistar Classic. She made her rookie debut as an LPGA member just days before her 17th birthday last year. Wie was 19 when she earned LPGA membership through Q-School.

What are Ko’s professional options?

• Ko could turn pro anytime she likes. She merely has to declare herself a professional. As soon as she begins accepting payment for her performance, or accepting endorsement offers, she will be a pro.

• As a pro, Ko wouldn’t be automatically exempt into any professional event she wants to play. That’s the challenge in turning pro. There are limitations on access for non-members of the LPGA’s tour.

• If Ko wanted to turn pro and play LPGA events, she would have to do so as a non-member, or apply for a waiver of the LPGA’s rule requiring members to be at least 18. With a waiver, Ko could try to earn LPGA membership through Q-School, or by winning a tour event, or by earning the equivalent of top-40 money on the season-ending money list. Only money Ko won as a pro would count toward that “equivalent” non-member money list.

• As a non-member of the LPGA, Ko would be limited to playing six tour events on sponsor invites. By qualifying for the U.S. Women’s Open and Ricoh Women’s British Open, she could play those events without them counting against her six sponsor invites. Ko gets into those two majors by virtue of winning the U.S. Women’s Amateur last year. She also can play her way into LPGA events through Monday qualifiers. If she turns pro, there would be no limit to how many Monday qualifiers she could play as a non-member. As an amateur, if she makes into the field through Monday qualifying, it counts against her limit of six appearances on sponsor invites.