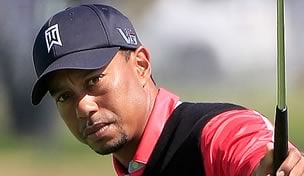 Getty Images
MEMPHIS, TN - JUNE 10: Camilo Villegas of Colombia lines up his putt on the sixth green during the first round of the St. Jude Classic at TPC Southwind held on June 10, 2010 in Memphis, Tennessee. (Photo by John Sommers II/Getty Images)  -

Stumble into any professional sports news conference or interview scrum and you’re bound to hear the words “one day at a time” uttered before too long.

Crash Davis famously schooled Nuke LaLoosh in the art of this phrase in “Bull Durham.” Legendary UCLA basketball coach John Wooden claimed that we had to seek small improvement in these increments. The words even transcend sports; Abraham Lincoln used the saying to explain that the best thing about the future is that it comes this way.

Call it a cliché – because, well, that’s exactly what it is – but taking things “one day at a time” is a rite of passage in professional athletics, the spoken ability to focus on the present akin to acing a sports psychologist’s pop quiz. Tiger Woods is no stranger to clichés, employing the “one day at a time” defense on his fair share of occasions. It isn’t often, though, that he outwardly lists specific goals. And he didn’t this time, either – but the 14-time major champion has told longtime friend and NBC/Golf Channel analyst Notah Begay that he has his sights set on a certain number of major titles before his career is over.

'He is focused on 20,” Begay said in a Sports Illustrated cover story that will hit newsstands during Masters week. “That may be a little hard to believe, considering what's transpired in the last three years, but that's where his focus is. He thinks he is capable of winning 20 majors.'

Public objection can be a funny thing. While the usual “one day at a time” athletes are often chastised for being too bland in their perspective, Woods’ comment – even one spoken only privately to a friend and not boasted publicly – will likewise be viewed as too obtuse. His bravado in basically saying, “I need five more major victories to pass Jack Nicklaus, so I’m going to win six,” will be unnecessarily characterized in a negative light, just like the recent slogan, “Winning takes care of everything,” in his Nike ad.

Quite frankly, if this is Woods’ mindset, it’s a refreshing one. Too often professional golfers address questions about long-term goals with such intangible rhetoric as, “I want to become more consistent” or “I just want to keep improving.”

Even secondhand, Woods is quashing the notion that vague goals are somehow more favorable. Whether he ever gets to 20 or not, simply stating that endgame can provide extra motivation and inspiration for a golfer who has often thrived on those emotions. From facing Stephen Ames in match play to proving wrong his doubters post-scandal, Woods may be the game’s all-time leader when it comes to dangling carrots in front of his nose, then racing out and catching them.

In a way, it recalls his usual refrain about peaking four times per year, a not-so-thinly veiled reference to the major championships. Woods maintains that he wants – and plans – to have his best stuff when these tournaments are contested. It makes for noteworthy headlines, but think about it for a minute and the entire strategy sounds more than a bit flawed.

“I don’t really know how to totally do it for golf,” Woods’ instructor Sean Foley told me recently. “But I know in other sports, for example, Michael Phelps isn’t swimming fast two weeks before the Olympics. Sprinters don’t want to set world records two weeks beforehand. But I don’t know how you do that in golf.”

With three victories already this year, Woods certainly hasn’t paced himself prior to the majors, which sort of negates his own theory. But here’s the thing: It doesn’t matter. If Woods just thinks he can peak four times per year, that’s as good as doing so physically. Mind over matter, those sports psychologists might say.

Same goes for his stated goal of 20 career major championship titles. There are those who may call him arrogant for culminating a four-year drought by putting designs on a master plan to exceed Nicklaus by two. But it’s just another carrot that he’s dangled in front of his own nose, providing additional reason to continue working just as hard both on and off the course as he always has.

If Woods is focused on 20 and thinks he’s capable of winning 20 – as Begay maintains he has said – again, that’s half the battle. Mind over matter. He has an uncanny ability to set goals for himself and either reach or surpass them. It is a mindset we should applaud rather than denigrate, one we should celebrate and hope is contagious among his peers.

Just consider the alternatives. Even behind closed doors, Woods could have whispered to his longtime friend comments such as “I want to become more consistent” or “I just want to keep improving” or the ever-inconclusive “I’m just taking things one day at a time.” Instead, he chose a tangible goal, one which has never before been accomplished. It’s exactly what we should expect from a golfer who has thrived with similar mindsets throughout his career.