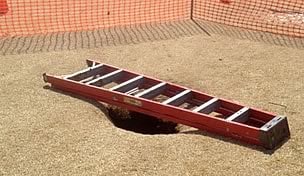 This was one hazard a golfer couldn’t possibly avoid.

“I was standing in the middle of the fairway,” Mihal told the St. Louis Post-Dispatch. “Then, all of a sudden, before I knew it, I was underground.”

Mihal, of Creve Coeur, Mo., only dislocated his shoulder while falling into the mud floor of the sinkhole, which was 18 feet deep and 10 feet wide, according to the report.

So, how did he escape? A friend climbed into the hole, tied a rope around his waist and was hoisted out.

''I feel lucky just to come out of it with a shoulder injury, falling that far and not knowing what I was going to hit,'' Mihal, told The Associated Press before heading off to learn whether he'll need surgery. ''It was absolutely crazy.''

The scare won’t drive Mihal out of the game, though he did concede that a return trip to Annbriar seems unlikely.

“It’d be kind of strange playing that hole again, for sure,” he told the Post-Dispatch.

Information from The Associated Press was used in this story.