The many reasons to be jealous of DJ 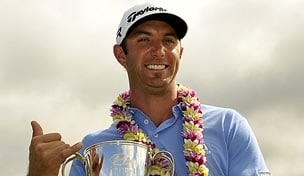 KAPALUA, Hawaii – It's perfectly acceptable to be crazy jealous of Dustin Johnson. Green with envy, as they say. Hell, you can even hate him if you want.

Just pick a reason, any reason. There are plenty to go around.

Since graduating from Coastal Carolina, he's won in each of his first six years on the PGA Tour – the first player to accomplish that out of college since Tiger Woods. His victory Tuesday at the Hyundai Tournament of Champions was the seventh of his career and emblematic of the way he plays. He started the final round atop the leaderboard, opened up a bigger lead, nearly coughed it away, and then separated himself once again.

Johnson is golf’s version of Brett Favre in his prime. He’ll often do something stupid to make you shake your head, but he’ll always follow it with a display of brilliance that few others could pull off.

On this occasion, the back-and-forth occurred on the 13th and 14th holes. At 13, he pulled driver into the thick grass left of the fairway, failed to advance his ball with his second shot and made double-bogey. The next hole, he fearlessly hit driver again and came up just short of the 14th green, then chipped in for eagle – the ultimate in “bouncebackability.”

“I've done it enough times that it doesn't really bother me anymore,” he laughed. “I've been in this situation enough now and I've made enough double bogeys in my life, that, you know, it's just another hole, and you've got a lot more holes to go where you can make it up.”

Yes, with a little more luck and a little better decision-making, his seven-win record could be 10 wins with three majors, but it’s not exactly like the guy is wasting talent. In what is simultaneously the best and most irrelevant stat of the week, three of those titles have come in 54-hole tournaments, meaning he's getting paid full-time even when he gets a day off.

If that’s not enough to make you jealous, though, there’s more.

At 6-foot-4, 190 pounds, he was fourth on the PGA Tour in driving distance last year at just over 310 yards per clip. Kapalua’s Plantation Course annually offers some of the longest measured drives of the season, but that shouldn’t belittle Johnson’s numbers this week. In just three rounds, he had 13 tee shots of more than 350 yards, including two that passed the 400 mark.

“He's got that athletic build, that athletic body,” playing partner Steve Stricker said. “He's got a tremendous amount of flexibility. He gets the club in positions that people can't get it into, and he can use that height to his advantage and big arc to get that big, powerful hit on the ball.”

Not impressed yet? Well, his athleticism extends beyond golf. The dude can dunk – barefoot. He loves all water sports. Last year at AT&T Park, he threw out the first pitch before a San Francisco Giants game. Sure, he bounced it, but with an effortless motion and lanky delivery it wouldn’t be hard to imagine him taking the mound if that’s the direction he’d chosen long ago.

At one point during Tuesday’s final round, one commentator opined that Johnson is the only golfer who could make the notoriously cool Fred Couples seem nervous. Some may mistake Johnson’s nonchalance for a lack of devotion, but it’s just his nature.

As far as personality traits for professional golfers, the ability to remain constantly casual isn’t the worst one to own.

Anyone who’s ever thrown a club in disgust or muttered a naughty word would be jealous. And if you’re not, there’s this.

Throughout the week at Kapalua – OK, week-and-a-half, by the time it was over – Johnson was seen canoodling with Paulina Gretzky.

Yes, that Paulina Gretzky. Daughter of the hockey legend, actress and lover of the camera lens.

If you haven't seen her, do a Google search right now. If you have, do another one.

When asked about his relationship with her after the tournament, Johnson responded, “Does it matter?” When informed that inquiring minds wanted to know, he followed, “I don’t know who you’re talking about,” while a huge smile splashed across his face.

So like I said, there’s plenty of reasons to be jealous of Johnson. Envious even. And yeah, you can even hate the guy.

Or you can take all of these reasons – the golf game, the athleticism, the demeanor, the … other things – and use them as the very reasons to root for him, to understand what makes him so talented and how he’s been able to win so frequently.

He proved it all once again this week.