Masters blooper: Billy Horschel slips and then scores with incredible water shot at 13 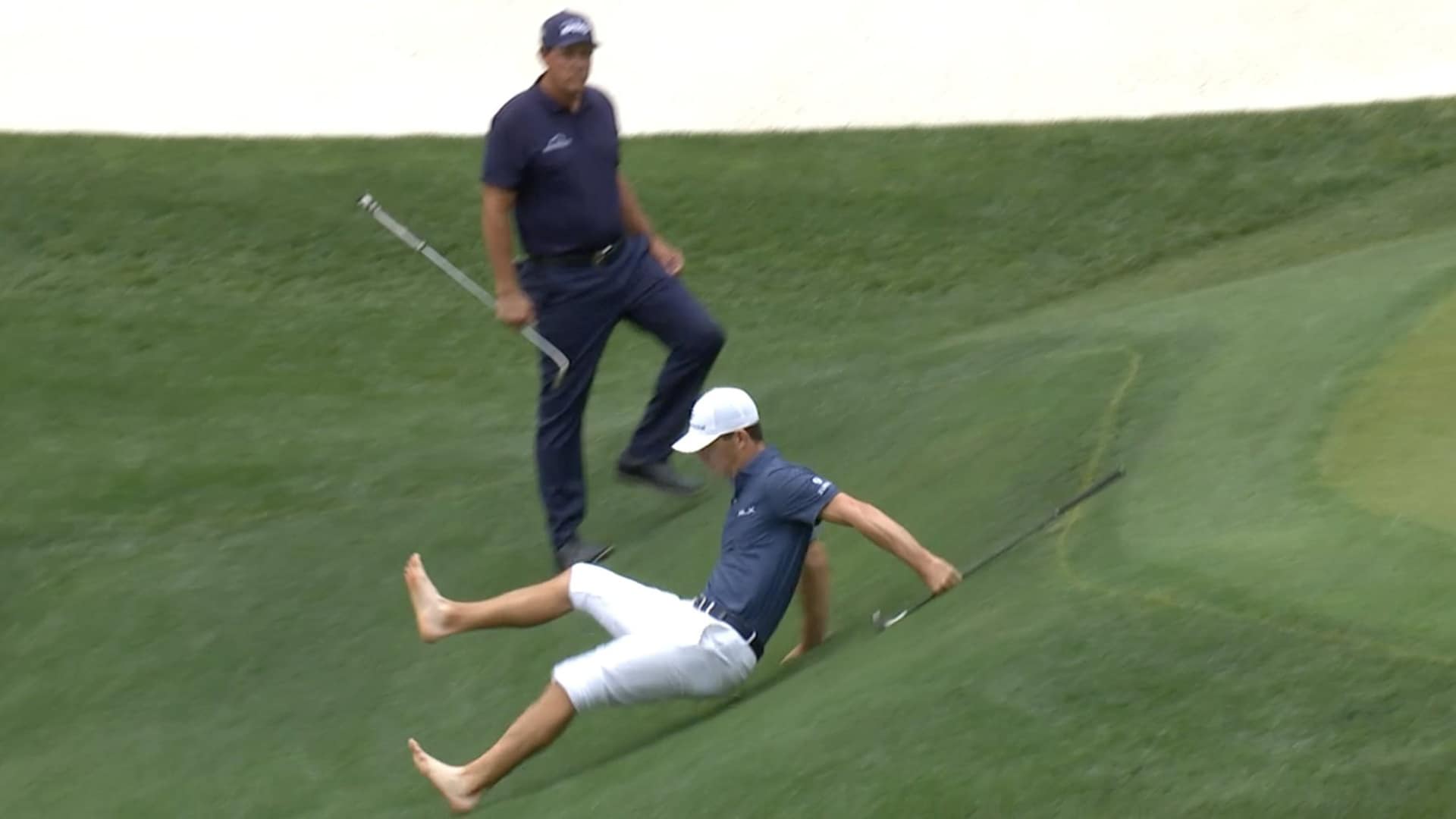 AUGUSTA, Ga. – After stepping on the interview podium Saturday at Augusta National, Billy Horschel turned around and stuck out his rear.

His battle scar: A noticeable grass stain on his white Ralph Lauren pants, product of Horschel slipping and falling on the grassy bank that runs down from the 13th green to the tributary of Rae’s Creek.

“I thought it was worse,” said Horschel, who had 200 yards from the pine straw to clear the water with his second shot at No. 13. He failed to keep it dry, hitting his 5-iron a groove low, and the ball came out low and missed land by a few yards.

With his ball fully submerged, Horschel opted not to drop. Instead, he took off his shoes, rolled up his pantlegs to his knees and started to study his shot. But as a barefoot Horschel walked down the slope toward his ball, his feet came out from under him and he landed right on his backend.

His playing competitor, Phil Mickelson, was standing just yards behind him.

“I said, ‘How bad is it? How bad is that grass stain going to be?’” Horschel recalled, “and he said, ‘There may not be one there,’ and he looked and said, ‘Yeah, there's one there. Sorry, buddy.’ Obviously, that's going to be a highlight that's played on social media or maybe Augusta or the Masters will take it off.”

The funny moment lightened the mood for Horschel, who had played his first 12 holes in 2 over, though demonstratively acted as if it were worse. There was a club throw into the air like a baton, there was a swipe at a tee marker and a few choice words here and there.

“Oh, Billy, such a bad golf swing,” he told himself after hooking a drive into the trees at No. 11.

A hole later, as Horschel’s tee ball found the back fringe, he violently swung his club back through the air after his follow-through in disgust. After missing his birdie putt at No. 12, he put his hands up and looked toward the sky in disbelief.

But he regrouped after his tumble, hitting an incredible shot from the creek. After a big splash, Horschel left himself 30 feet coming back for birdie. He missed the putt but saved par, and then birdied Nos. 15 and 16 to salvage a 1-over 73.

“One of the best shots I've ever seen,” Mickelson said. “There were two balls in the water that I was looking at, one was half submerged (Adam Scott’s ball from earlier), one was fully submerged. I thought for sure his ball was the one half submerged. Unh-unh, he went after that ball fully submerged and got that thing out. It was an incredible golf shot. That's not easy. Sometimes that thing comes out kind of blah. I'm curious how he hit that.”

Let Horschel explain: “I'd say it was probably a couple inches under the water. Fortunately enough, I've hit a few shots from the water just for fun in my lifetime, and I understand that the ball will come out … it wasn't too deep, so I knew – there was a whole bunch of green behind me – as long as I hit it hard enough, it would come out. Phil was impressed by that. I guess that's my highlight of the day.”

His slip certainly led the bloopers category. Horschel said he’s had more embarrassing moments in the past. He’s ripped his pants a few times, and then there was the cooler incident involving Tiger Woods at Bay Hill.

“I do not know what you're talking about there,” Horschel said twice before obliging to tell the story.  “The great thing about that, there was no visual evidence that that ever happened. That was a great thing that I did it behind the cameras. Tiger was giving me crap earlier in the week about that, and so obviously I was going to show him that I could jump a little bit, just jokingly, and as I was in the air, I saw the cooler was not – the lid was broken, and thankfully I was behind the cameras because it would have been a funny sight to see. Tiger was on the ground laughing for a good minute and a half.

“Yeah, there's been some embarrassing things, and it happens. I don't know, maybe it's me and things I do it just happens. I'm fine with it. Like I said, it's funny. You can laugh about it and have fun with it, it's OK, and I do a lot of it on my own.”