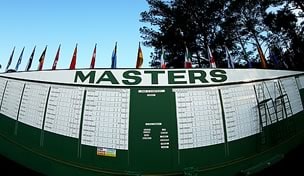 Golf Channel analysts Brandel Chamblee and Frank Nobilo each have Masters experience. Chamblee was the first-round co-leader in 1999 and eventually tied for 18th. Nobilo competed four times at Augusta National, finishing fourth in 1996.

The two share their thoughts on the season’s first major, in this GolfChannel.com Q&A:

Nobilo: 1) Putting. It is such a high priority week in and week out, but because of the difficulty of the greens (speed and slope), putting is paramount at Augusta National. 2) Iron Play. With so much written about Augusta giving into the bombers, people forget that this is a great second-shot course. To get the ball into the right position on these greens is an art. 3) Driving distance. Going in with a shorter club is always easier and there are a bunch of guys who hit it straight, so all things being equal, you have to favor power off the tee. 4) Ball flight. Equipment has taken a lot away from the high-ball hitter. His distinct advantage in stopping power has been ified by the influx of hybrids that now bridge that gap.

In the past, it's been said that only 10-15 players have a chance to win the Masters. How many players can be considered realistic contenders this week?

Chamblee: To say only 10-15 players have a chance to win the Masters is one of the most fallacious remarks repeated year after year. Schwartzel was ranked 29th in the world on the eve of the ‘11 Masters; Angel Cabrera was ranked 69th the week before he won his green jacket in 2009; and Trevor Immelman (2008) and Zach Johnson (2007) were 29th and 56th in the world, respectively, before they broke through. Any of the top 50 players in the world has a realistic chance to win this event.

Nobilo: Only one player in the top 15 of the world rankings has won the Masters over the last five years. Consequently, the old adage that only 10-15 people can win has changed dramatically. You would say that number is now realistically between 25-30. Equipment and an overall more aggressive playing style have created more potential winners.

Name a top-20 player who we shouldn't expect much from this week? Why?

Chamblee: The only player in the top 20 that is a big question mark is Brandt Snedeker, because of his rib injury. Beyond that, one can make a case for any of the top 20 in the world to contend.

Nobilo: Nearly two months ago, Brandt Snedeker was atop all the important lists. His improved tee-to-green game, in conjunction with fearless putting, would have made him one of the favorites heading into Augusta. Sadly, the he rib injury has more than slowed his progress. He has had two missed cuts and has yet to regain that form, since returning.

Who has the best chance to win his first major this week? Why?

Chamblee: Adam Scott has the best chance of the players without a major this week. In his last eight majors played, he has four top-10s, which includes a second and an eighth-place showing at the Masters. He is one of the longest, straightest drivers in golf. He leads the Tour in par-5 birdie percentage this year, which is of huge importance at Augusta National.

Nobilo: There is a great list of potential first-time major champions teeing off this year, from Justin Rose, No. 3 in the world, to Henrik Stenson, No. 41. As I look down the list, I keep coming back to Dustin Johnson. He is coming into form at the right time with a T-12 and a T-4 his last two starts, and with a game well suited for Augusta.

We may be getting to the point where we can ask 'Tiger or the field?' again. But we'll go a step further. Would you take Tiger, Rory and Phil or the field? Why?

Chamblee: Since 2003, Tiger has won six times at Torrey Pines, five times at Bay Hill, four times at Firestone and twice at Muirfield Village. But he's only won once at the Masters. While his game has returned, Augusta National does not fit his game – or should I say, Tiger doesn't fit his game to Augusta the way he once did. Mickelson continues to get shorter and shorter off the tee and that makes it harder for him to be the player who has won there three times, and Rory struggles with left misses – and left misses at Augusta will hobble a player psychologically. The field is the better bet.

Nobilo: From 1997-2006, six of the 10 tournaments were won by Woods and Mickelson. Over the last six years, only Phil has added to that list. Even adding McIlroy to the group, you would have to take the field.

Which part of Rory McIlroy's game is most important for him to contend?

Chamblee: If Rory hits his driver great this week – drawing it around the corner at Nos. 2, 5, 9, 10, 13 and 15 without missing it left – he will be very hard to beat. He led the field in greens in regulation at the Texas Open and great drives will set him up to attack on the scoring holes.

Nobilo: Adding an event was a step in the right direction for Rory. While some continue to debate the club switch, that ship has sailed and it is more important to realize that he is using the same equipment as the best player in the game, Tiger Woods. Right now, Rory is starting to swing the club very well again and it is about competing – or, as Ben Hogan once said, “controlling that 6-inch fairway … the one between the ears.”