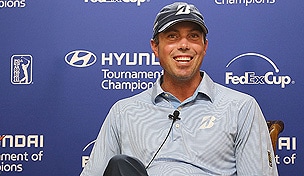 That was the sentiment felt throughout the locker room Sunday at The Plantation Course. After stopping, starting, resetting and delaying Round 1 of the Hyundai Tournament of Champions across three days, players were skeptical that Sunday would prove any different.

'After we went through Friday and then having Saturday blown out, as well, we were kind of expecting that today,' Matt Kuchar said. 'With the wind being as strong as it was this morning ... I think most guys pretty much could have told you what was going to happen in the locker room.'

'I'm not sure if that was the point to show that we're making every effort to play,' Kuchar said.

'We were closer today with the sunshine. ... All of us are expecting to get out early and play 36 tomorrow,' Kuchar said.