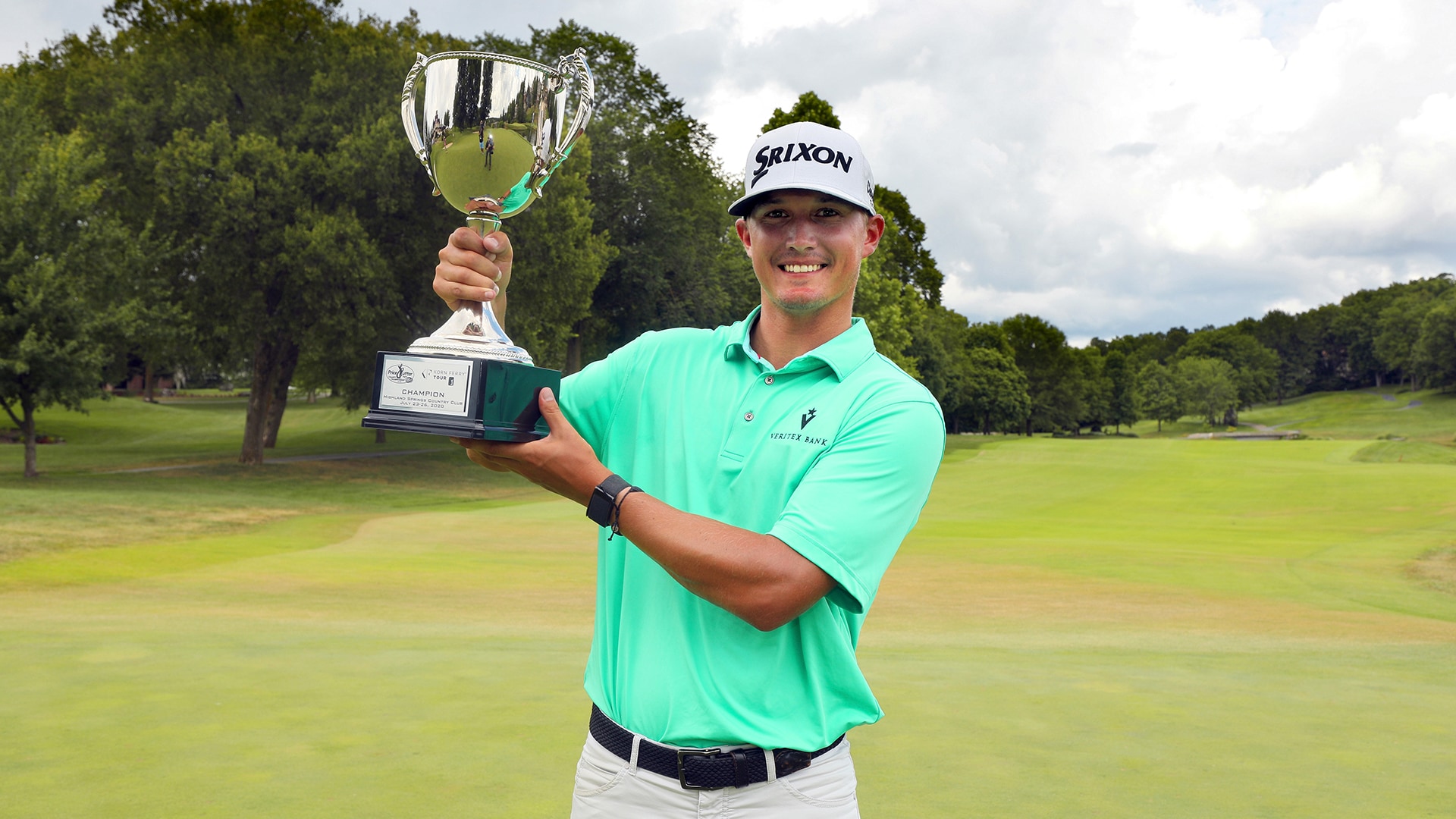 Max McGreevy finished the week the way he started it.

The 25-year-old Oklahoma product closed in 8-under 64 to post a clubhouse lead of 21 under Sunday at the Price Cutter Charity Championship. He then posted up near the 18th green at Highland Springs Country Club in Springfield, Missouri, waiting to see if that score, with three groups behind him, would stand.

When neither player converted, McGreevy, who earlier had lipped out a birdie putt on the final hole, started celebrating, only to quickly find out that there was a scoring error. Rodriguez was actually at 20 under and could tie McGreevy if he sank a 30-footer for birdie.

“I probably looked a little silly,” McGreevy said afterward. “… Luckily, it worked out in my favor.”

“I’ve never won a four-round event before,” said McGreevy, who opened the week in 64 before entering Sunday five shots back. “To be able to put something together on the final day means a lot to me.”

McGreevy earned his KFT card for the first time in 2018, a year after turning pro following a senior season in which he helped the Sooners to the NCAA title. However, he lost it after just one season and ended up playing PGA Tour China last year. The tough decision to leave home paid off, as McGreevy notched nine top-10s, including a victory at the Guangzhou Open, which he won after the tournament was shortened to 36 holes.

McGreevy said the decision to spend 14 weeks in China, away from his family back in Edmond, Oklahoma, was tough.

“It took a lot for me to go over there and do that,” said McGreevy, whose parents traveled to Springfield on Friday after he grabbed a share of the first-round lead, even though they couldn’t physically be on property at Highland Springs.

But the globetrotting experience was one the self-proclaimed "homebody" needed, and it made him stronger.

“I didn’t win as many times as I wanted to over in China, but I feel like I was in a lot of final groups last year,” McGreevy said. “Even though it’s maybe not to the stature that the Korn Ferry Tour is, I definitely had a lot of experience around the final group and knowing how to keep my composure and just keep the pedal down.”

McGreevy didn’t have the pressure of playing in the last group Sunday. In fact, he forced himself to avoid looking at leaderboards until he got to 20 under. When he reached that number after a birdie at No. 15, McGreevy was surprised to see that he was leading by two shots. He birdied the next hole, which proved to be the difference.

McGreevy’s win bumped him up from 40th to eighth in points. He had missed eight of 11 cuts before this week, though he did have three top-15s, including a T-3 in Panama in February.

“It has been a little bit of a frustrating year, but I still feel like I’ve played good,” McGreevy said. “I just needed a week like this where everything kind of clicked, and it finally did.”