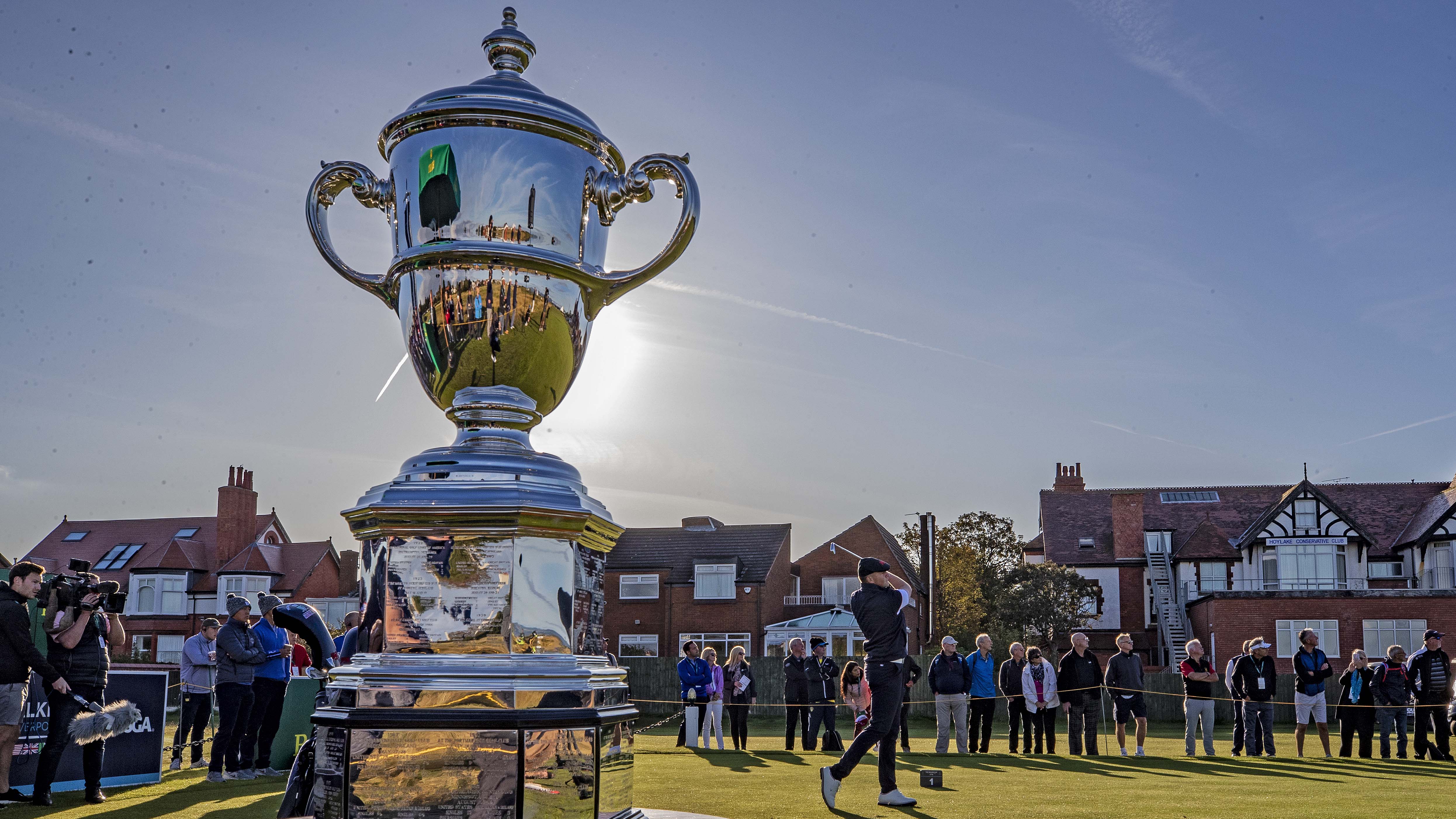 HOYLAKE, England – In the Walker Cup, you can pretty much throw rankings out the window. Tom Sloman and Tom Plumb proved it Sunday morning at Royal Liverpool.

The affable Great Britain and Ireland duo from Somerset, England, spotted Americans Cole Hammer and Steven Fisk 185 world-ranking points in their foursomes match before delivering the unlikeliest of results, a 5-and-3 thrashing, the biggest margin of victory so far this weekend.

“The system we believe is all over the place anyways, but at the end of the day, we’re in England, it’s the game of golf and we’re all at a similar level,” said Plumb, who is ranked No. 157 in the World Amateur Golf Ranking (Sloman is No. 39). “Cole is obviously world No. 1, but it means nothing. It’s one round of golf; if we play well and he doesn’t, we’re going to win.”

The Englishmen, who estimate they’ve played more than 20 foursomes matches together in competition, birdied the opening hole and dropped three more birdie putts on the highly-ranked Americans, including a bomb at the par-3 11th that kept them 3 up. Meanwhile, Hammer and Fisk, ranked 10th in the world, didn’t come with their best stuff for a second straight session, making just one birdie and conceding three holes to their GB&I counterparts, including the final hole, the par-4 15th.

Despite dropping the anchor match, though, the U.S. team managed to steal the session, 2.5-1.5, and trails by just one point, 8.5-7.5, entering Sunday afternoon’s 10-match singles session.

Brandon Wu and Alex Smalley got the first point on the board for the U.S. on Sunday, rallying from 2 down after seven holes to beat Alex Fitzpatrick and Conor Purcell, 2 and 1.

The pair made just one bogey after that. They took No. 8 with par and then won both par 5s, Nos. 14 and 16, thanks to two incredible second shots by Wu – a 300-yard 3-wood out of the rough to 25 feet to set up a two-putt birdie and a 230-yard 5-iron that settled 10 feet from the hole. Smalley missed that putt, but the Americans still took the hole and their first lead. A hole later, they closed out their opponents, who missed their final four fairways.

Stewart Hagestad and Akshay Bhatia put another U.S. point on the board just moments later, closing out Harry Hall and Conor Gough, 3 and 2. And John Augenstein and Andy Ogletree, 2 up with four to play, hung on for a halve with Sandy Scott and Euan Walker.

The Americans actually earned more points in foursomes this weekend, 4.5-3.5, and if they end up winning it all they will be the 11th team in the past 12 Walker Cups to win more foursomes points and capture the Cup. On the other hand, the last time the U.S. trailed after Day 1 and came back to win was 1963 at Turnberry.

But like rankings, history can generally be disregarded, as well. Only one player on either side has played a Walker Cup before – Hagestad was on the winning U.S. side two years ago at Los Angeles Country Club.

One thing that can’t be ignored is form. In the last Walker Cup, the Americans had three of its best players – Maverick McNealy, Collin Morikawa and Doug Ghim – go 4-0. Norman Xiong (3-0-1) also didn’t lose a match.

If the U.S. wants to win Sunday afternoon, it’s going to need better play out of two of its best players, Hammer and Fisk, who are each now 0-2 after sitting the opening session.

Crosby has remained confident in regard to the two, which is why he’ll send them out in the final two singles matches – Hammer will face Purcell in the penultimate match while Fisk will be in the anchor spot opposite Sloman.

“They’re going to be really anxious to earn their keep this week, so I expect the very best of their games this afternoon,” Crosby said. “… Even though they're 0-2 going in, they might have the winning putt or the winning moment, and I put them in that spot for that very reason. I'm expecting Cole and Steven to come through for us.”

“The Americans will come out all guns blazing,” Watson said, “as they always do.”