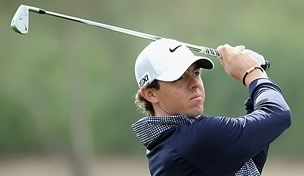 After Rory McIlroy surprisingly missed the cut in his first start of 2013 at the Abu Dhabi HSBC Golf Championship this week, his manager insisted the world's top-ranked player simply needs more time to adjust to wholesale equipment changes.

'It's going to take time. He's got to work the clubs in gradually,' Conor Ridge told reporters following his client's early exit from the event. 'It was always going to be that way, he knew that from the start. Some things will not be quite right at first and some things will be perfect.'

After a successful season that included a major title and an ascension to the top of the world ranking, McIlroy made headlines this offseason with a rumored switch to Nike that was confirmed by an official announcement in Abu Dhabi this week. The change included a total overhaul of the equipment in his bag, though Ridge indicated that McIlroy would have struggled this week regardless of the clubs he was wielding.

'He even said himself at the start of the week that it was going to be an unkown going into tournament play versus what he was doing on the practice range,' Ridge noted. 'I think that if he had 14 Titleist clubs in his bag...it would have been exactly the same.'

With McIlroy's next tournament appearance now a month away at the WGC-Accenture Match Play, his manager remained optimistic that the transition plan currently in place will soon yield better results than the pair of 75s the Ulsterman put together this week.

'The reason he played here is because he knew he could take a couple weeks of testing, a couple weeks of practice, play a tournament and then have another four weeks to work on it again,' Ridge explained. 'I actually think it's going to work out well that way.'