Thompson plays for all the right reasons and wins 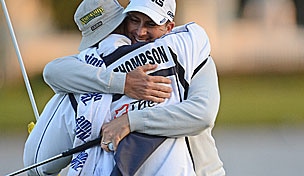 PALM BEACH GARDENS, Fla. – The challenge echoed out from all the boisterous noise in the bar above the Bear Trap’s 17th hole early Sunday evening at the Honda Classic.

Michael Thompson heard it, and even as he fought to close out the first PGA Tour victory of his career, he couldn’t let that go as a former University of Alabama golfer.

He barked an answer before marching to the 18th tee.

There were so many questions about Thompson and whether he had the pedigree to hold off a couple of big names in the final round at PGA National’s Champion Course. He had answers for all of them with his terrific shot-making in the high winds Sunday, and yet this triumph might not have been possible if he didn’t find the answers to the tough questions he asked himself heading here last week.

Why was he really playing this game? Why was he putting himself through the torment?

Even Thompson didn’t see this breakthrough coming after the misery he endured in his last start at the Northern Trust Open.

He shot 80 and 78 at Riviera and missed the cut, finishing 138th, dead last with the six withdrawals. It was his third missed cut in four starts with his best finish a lowly T-78 at the Farmers Insurance Open.

Thompson uncannily made the leap from dead last to first in one start.

What turned him around so quickly?

“I don’t know, other than him being completely at the bottom, being utterly broken down and feeling like he had nothing going for him, and just being able to focus on enjoying the game again, and practicing, and feeling like he was playing for himself and the passion he has for golf, rather than trying to please people and everyone around him,” his wife, Rachel, said as her husband signed for a closing 1-under-par 69, good for a two-shot victory. “I think he was able to let go of all the expectations with that last-place finish and just come out here and feel completely free to play the way he wanted to play.”

Thompson is a man of faith, and he found the answers to the hard questions he was asking himself in his Christian beliefs.

“I thought I would come out this year and play great,” said Thompson, who played collegiately at Alabama and Tulane. “As a golfer, that's what you want to believe. I do believe the Lord has different plans, and the best way He can humble us is by allowing us to experience a low point, whether it's rock bottom, or just the bottom of wherever you are.”

Thompson left Riviera with his confidence battered and little hope he was going to win anything anytime soon.

'I was having thoughts of, 'I'm going to miss every cut this year, I'm not going to play great at all, I’m going to lose my card,'' Thompson said. 'And then what?'

Thompson came to the conclusion that as long as he had a tour to play golf, even if it was a developmental tour, he was going to be happy.

“The Northern Trust was a good thing in my life,” Thompson said. “It allowed me to focus on what I needed to do in order to play like I did this week.”

Thompson arrived at PGA National one full week before the event started.

“He kept telling me he was going to find the answers in the dirt,” said Matt Bednarski, Thompson’s caddie.

PGA National played so difficult this week. With a couple par 5s turned into par 4s, and with howling winds making par a good score, Thompson thrived in a setup that almost felt major championship tough. He likes that kind of golf. He likes survival golf. He showed that when he made a stunning run at winning the U.S. Open at The Olympic Club last summer. In 51 PGA Tour starts heading to that U.S. Open, he had just four top-10 finishes.

Thompson tied for second at The Olympic Club.

“I've always been a scrappy player,” Thompson said. “One thing Coach [Jay] Seawell said to me was that while I was at Alabama, I hit the fewest number of fairways and the fewest number of greens compared to the rest of the team, but I made the most birdies. That's a perfect example of just who I am. I'm not a great ball striker. I think I'm pretty good. I was pretty good this week. But my putting is what saves me.”

Thompson grew up with a mentality that still serves him well.

“I think I've always been very good at having the mindset of just, 'Go struggle. Just go get it done,'' Thompson said. “I remember telling myself when I was 14, 15 years old, just get the ball in the hole, and all your playing competitors are going to be mad at you for that. That's just what I do.”

Rachel says Michael has learned his struggles have purpose. She says the pastor who married them, Stephen Bunn, helped him understand that when they met in Birmingham, Ala., before the marriage.

“Michael couldn’t really figure out how golf and God were related to each other,” said Rachel, who has a doctorate in physical therapy from Tulane, where she met Michael. “Stephen sat Michael down and basically pointed out that `You are playing golf because God gave you this talent, and he expects you to go out and use it.’ I think Michael gained confidence from that, knowing God expects him to work hard, work his butt off, achieve his goals and always do a little bit better every time he goes out there.”

Thompson did a lot better than his last start at Riviera.

“Michael just looked a lot calmer, a lot more confident, a lot more at peace with everything,” Thompson said.