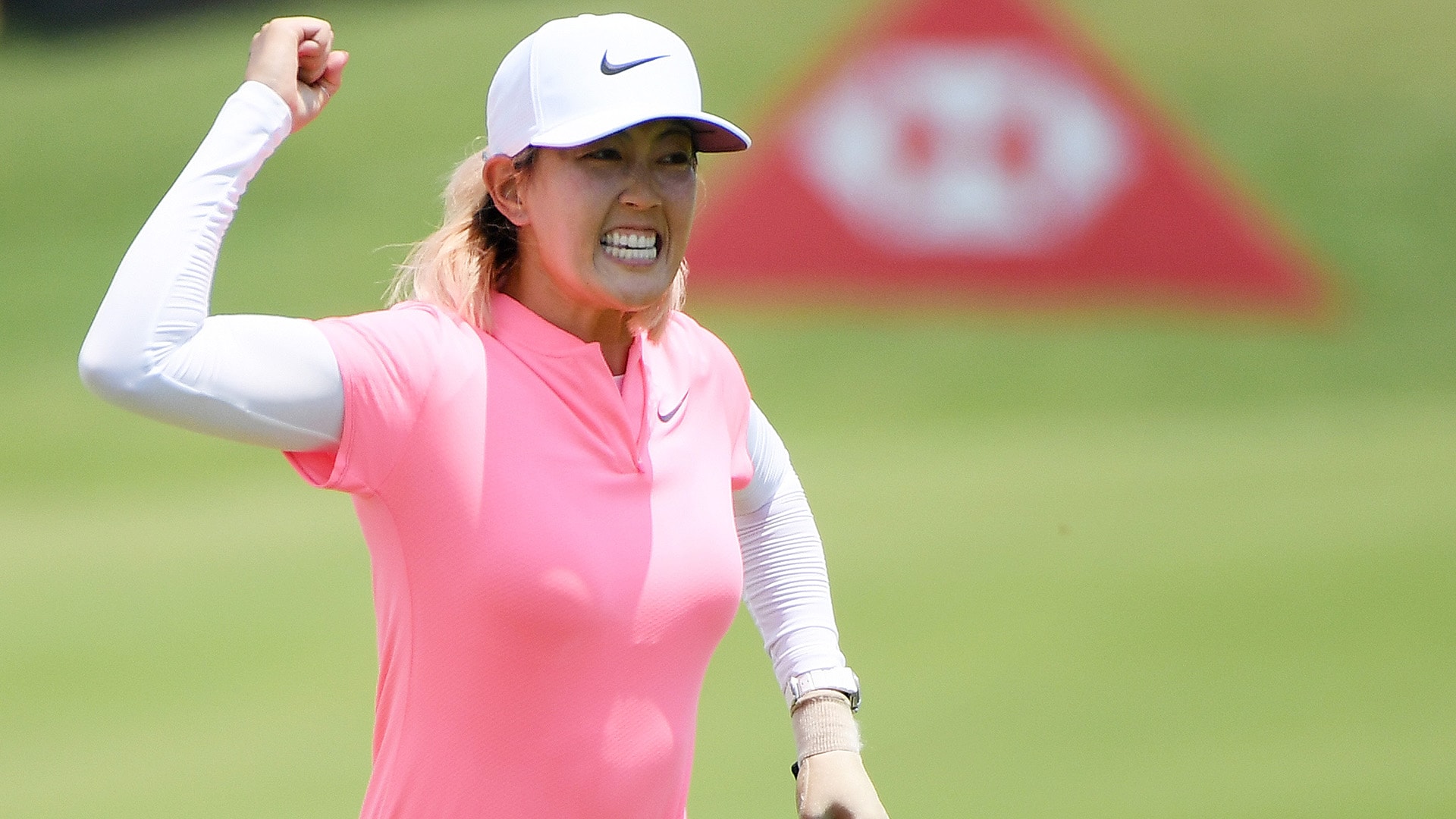 Michelle Wie keeps putting herself back together again.

Broken down by injury or illness or slump so many times in her career, she keeps finding ways to overcome.

She did it again Sunday in brilliant fashion, coming from five shots behind in the final round to win the HSBC Women’s World Championship in Singapore with a dramatic putt at the final hole, a 36-foot birdie from just off the front of the green.

Wie thrust her fist into the sky when that last putt fell, and then she punched the air twice more in giddy delight.

“I think that has to be the best putt of my career so far,” she said.

“It's been a tough journey since 2014,” she said. “It's been kind of well documented. I've had some injuries, had a really bad year, just lost a lot of confidence. I'm just really proud of myself for pulling myself out of it.”

Wie’s parents, B.J. and Bo, were in the gallery following, as they always are. Her parents have been scrutinized and criticized as much as any in the sport over their handling of the former phenom. Wie, 28, said they were on her mind when that last putt dropped.

“When I made the putt, I could just picture my parents kind of celebrating,” Wie said. “My family believed in me relentlessly, and with that, I started to believe in myself.”

Wie beat a star-studded lineup Sunday that included 19 of the top 20 players in the Rolex Women’s World Rankings.

With a bogey-free 7-under-par 65, Wie prevailed in a crazy afternoon of high drama, breaking out of a four-way tie for the lead with that birdie at the last. She finished at 17 under overall, a shot ahead of Brooke Henderson (67), Danielle Kang (70), Nelly Korda (71) and Jenny Shin (65).

“Everyone was really clustered up there on the leaderboard,” Wie said. “I'm just really proud of myself for making a lot of birdies, and [to] keep going.”

So many players got in the mix on the back nine, with one player after another mounting charges. The course record was 64, but five players equaled or broke the mark in the final round.

After her closing birdie, Wie had to wait in the wings and watch Korda and Kang miss birdie chances at the last that could have forced a playoff.

The victory was sweet for Wie for a lot of reasons, including her inability to close out a 54-hole lead in this event a year ago.

“I just wanted to get revenge after last year a little bit,” Wie said. “I kind of came with a slight chip on my shoulder in the morning.”

Wie overcame so much winning that U.S. Women’s Open at Pinehurst in 2014, when she finally looked ready to realize all her potential in a run to No. 1. But, she was derailed by a finger injury later that summer, and then by hip, knee and ankle injuries that led to an awful slump after that. When she finally looked as if she was turning a corner again last year, neck spasms and an emergency appendectomy derailed her in the summer.

“Definitely, my team and my family and my friends have pulled me out of the hard times and kept me going,” Wie said. “There have been moments where it was hard. It was hard to keep going and to keep playing.”

Wie’s longtime swing coach, David Leadbetter, has been there through all the challenges with her since she was 13.

“I can’t list all the injuries Michelle has had in her career,” Leadbetter said at year’s start. “I don’t think there is one joint or bone in her body that hasn’t had some sort of injury or issue.

“The main goal this year is really to see if she can go injury free.”

Leadbetter believes Wie hasn’t reached what she’s really capable of yet, but he’s hopeful this might be the year. There was promise loaded in Sunday’s victory.