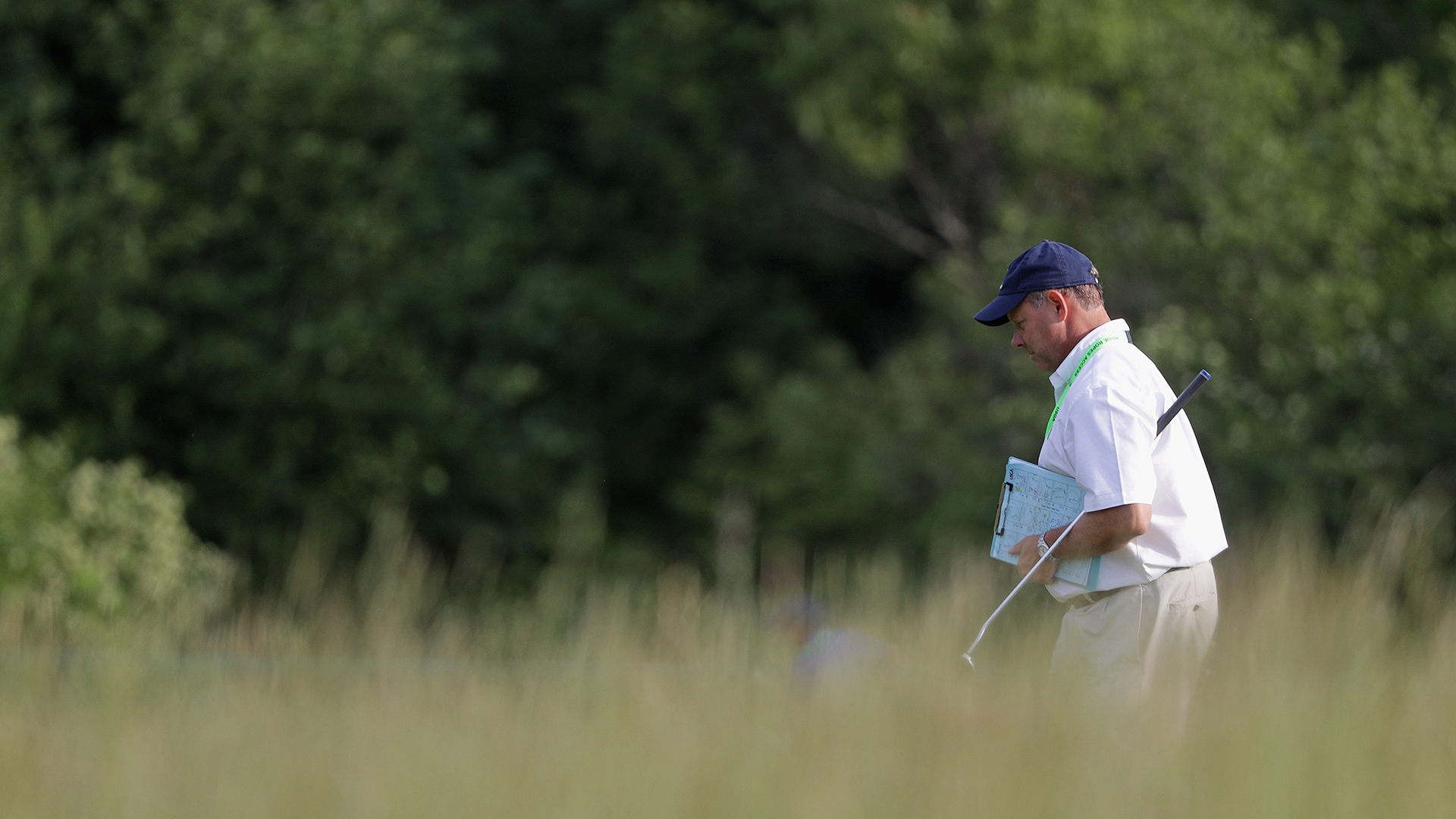 SOUTHAMPTON, N.Y. – Mike Davis was 15 when his father drove him up from their home in Chambersburg, Pa., to see the U.S. Open at Baltusrol.

It was an eventful trip, with Jack Nicklaus winning the 16th of his 18 major championship titles, but even back then, long before Davis would reimagine the U.S. Open in his role as executive director and CEO, seeds of change were being planted.

Davis didn’t just notice how penal the setup was. He noticed how arbitrarily penal it could be.

“I watched Keith Fergus hit a drive at the fifth hole and miss the fairway by about a foot,” Davis said.

After Fergus found his ball, Davis watched him take a mighty lash with his next shot, barely advancing it 3 feet. He can’t remember who Fergus was playing with, but the guy hit his drive wildly to the right, outside the gallery ropes, where he caught a better lie. The player took advantage, knocking his second shot to 4 feet.

“I remember scratching my head over that,” Davis said. “I turned to my father and said, `I know golf can be random, but it seems funny a guy who just missed the fairway can be so much worse off than a guy who hit it way off line.’ It got me thinking about things like graduated rough.”

Working his way through the USGA ranks, Davis gathered a lot of ideas, which would lead to his reimagining the U.S. Open and the test it will offer this week at Shinnecock Hills.

Once unofficially the “toughest test” in golf, it’s now reimagined as the “ultimate test.”

Instead of forcing the old U.S. Open formula on every golf course that hosts the championship, with penal rough crowding every narrow fairway and every green, the setup is adapted to honor the great architects who built the famed courses that host it, putting their intended defenses into play.

The “ultimate test” is meant to examine a player’s complete game, all the way through the bag, and that has meant creating wider fairways, to entice players to hit more drivers. It has meant sometimes shaving the grass around greens, to create collection areas that give players more short-game options. It has meant variable teeing grounds and drivable short par 4s, to make players think more under pressure.

Davis’ ideas are soundly defended, but they have been met with resistance, with some of the game’s great players, like Johnny Miller, wondering if the championship has lost its identity.

The old guard pines for the old formula, for the more severe and rigid setup to restore the U.S. Open’s identity. That’s what makes this championship’s return to Shinnecock Hills so monumental this week.

This iconic venue, one of the USGA’s five founding-member clubs, will present the “ultimate test” of whether Davis’ vision for the championship can work in a way that will appease the old guard.

For the purists, the U.S. Open has always been about “protecting par” or “making par a good score.” Davis can change the formula, but when that concept fails, this championship fails.

Brooks Koepka didn’t thrill the old guard equaling the U.S. Open record at 16 under at Erin Hills last year, and neither did Justin Thomas putting up a record 9-under-par 63 in the third round.

Davis believes Shinnecock Hills is the perfect venue to present the ultimate test in a way that upholds the U.S. Open’s noblest traditions while honoring William Flynn and the other great architects who combined to create this revered venue.

“There’s going to be a balance [of the old and new formulas], because we don’t want to lose that heritage, that kind of brand,” Davis said. “While we didn’t necessarily brand the U.S. Open as the toughest test, people thought of it that way. The fans have come to expect it, past players have come to expect it and today’s players expect it. I think at Shinnecock this week, you’re going to see tough hole locations, hopefully firm and definitely fast greens and fescue rough that’s going to be penal.”

Phil Mickelson believes Shinnecock Hills gives the USGA a chance to get this U.S. Open exactly right after botched executions left players and fans unsatisfied over the last three years.

“This is certainly one of my favorite courses,” Mickelson said. “It's the best setup, in my opinion, that we've seen, and the reason I say that is all areas of your game are being tested.”

The challenge, of course, is avoiding pushing the envelope the way the USGA setup team did in 2004, when play was briefly suspended in the final round after the seventh green became unplayably firm and fast.

Still, Shinnecock Hills will only play about 450 yards longer than it did in ’04, with fairways 40 and 45 yards wide this week, almost twice the width some were in 2004. With players mashing drivers so much longer than they did 14 years ago, it won’t be easy to protect par without pushing the envelope.

“It's a very difficult job to find the line, of testing the best players, to the greatest degree, and not making it carnival golf,” Mickelson said. “I think it's a very fine line, and it's not a job I would want.”

This U.S. Open may offer an ultimate test, but the final score will matter, and that’s the problem Davis faces. With the growing athleticism of players, with high-tech coaching, with space-age technology in balls, drivers and shafts, protecting par is more difficult than it’s ever been. It may take goofy golf, 8,000 yard courses or 20-yard wide fairways guarded by barbed wire to do that nowadays.

Davis believes great golf course architecture brings out great theater and great champions, and he’s confident Shinnecock Hills will do that this week.

“I’m hugely excited to get back to one of our most historic U.S. Open sites,” Davis said. “This golf course, in some ways, really did shape golf in the United States.”

And Davis hopes it will do so again this week.