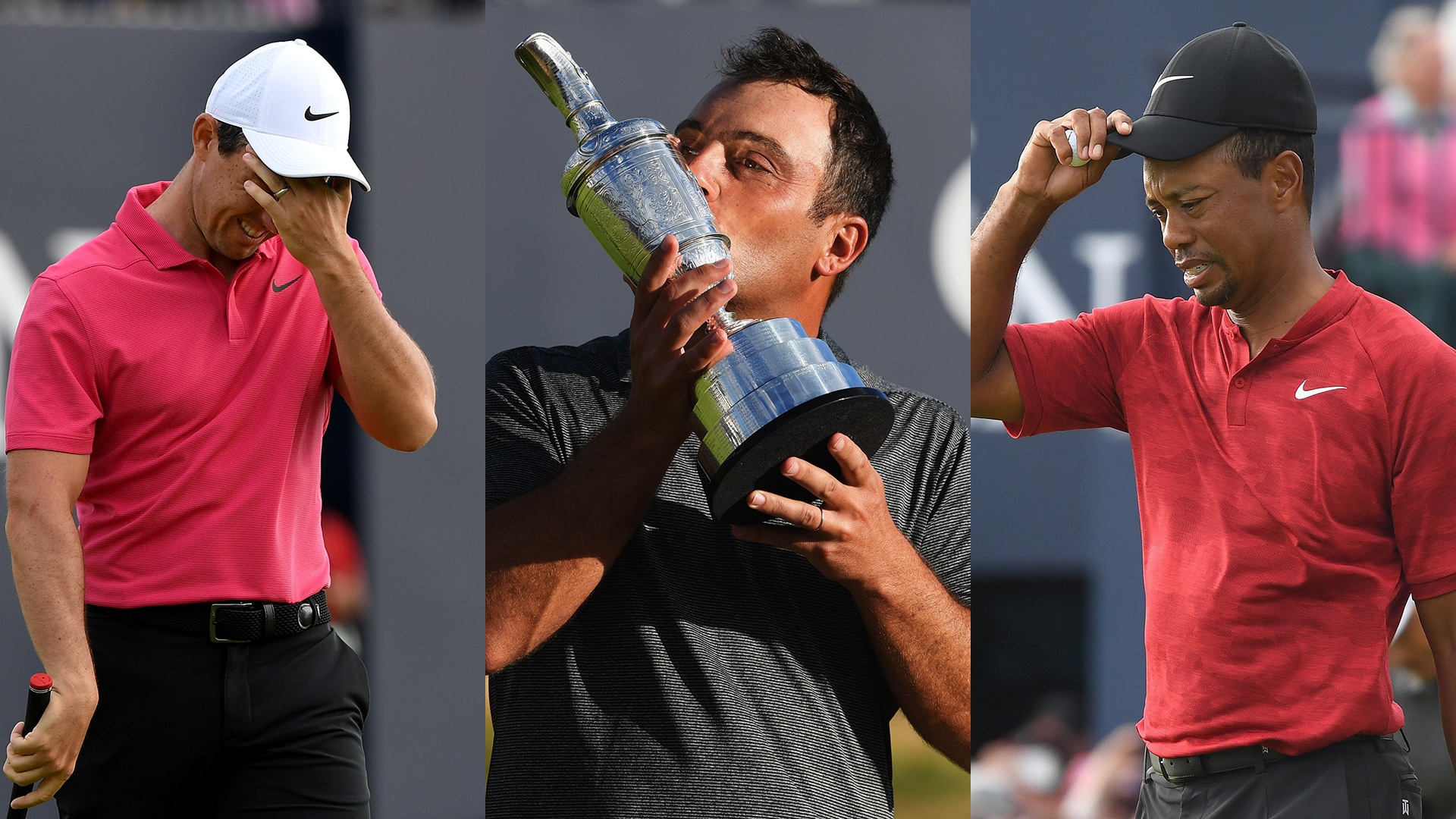 Amid a wild and windy afternoon at Carnoustie, where seemingly no less than a dozen players had a viable shot at the claret jug, it was a steady performance from Francesco Molinari that translated into breakthrough.

Molinari is no stranger to the big stage, and five years ago he played the final round alongside Phil Mickelson as Lefty stormed from behind to win at Muirfield. But this time, this day, it was his turn to shine as he put forth a ball-striking and scrambling clinic that yielded 16 pars and two birdies while the other leaders struggled around him.

It's the cap of an impressive heater for Molinari, who is now the first Italian to ever win a major. He outlasted Rory McIlroy at the BMW PGA Championship in May, won the Quicken Loans National by eight shots last month and now has finished first or second in five of his last six worldwide starts.

The soft-spoken veteran played the final two rounds without making a bogey, and he is a worthy champion. Expect the jug to receive a few refills of wine - and perhaps a little coffee - over the next year.

1. For about a 90-minute stretch Sunday, it seemed like Tiger Woods would finally find a way to silence the critics once and for all.

Playing alongside Molinari, Woods displayed the same tactical brilliance on the opening nine, carding two birdies while others struggled out of the gates and, at one point, taking the lead alone. But an errant approach and a poor flop shot led to a double bogey on No. 11, and his bid for the jug was diverted soon thereafter.

But man, what a ride it was through that opening stretch. For months the questions have lingered about exactly how and when Tiger might put all the pieces together, and after an early exit at Shinnecock it was easy to write him off. But his inner tactician shined for much of the week on a toasty layout, and he was steady in all facets over the weekend.

Just as Woods' five-win season in 2013 has been used as a recent example of just how high his ceiling reaches, so too this performance will be viewed like manna from heaven for Tiger apologists. He didn't quite pull it off, but there's every reason to expect that he can do so the next time around.

2. While he came up three shots short of catching Molinari, even Woods appeared to savor the final leg of a T-6 finish that serves as his best result in a major in five years and becomes the new high water mark for an already impressive season.

"It was a blast," Woods told reporters. "I was saying earlier that I need to try and keep it in perspective because, beginning of the year, if they'd have said you're playing the Open Championship, I would have said I'd be very lucky to do that."

3. A bit more on Molinari, the newest Champion Golfer of the Year who has turned into a weekend assassin over the last three months.

Between his stirring victory at Wentworth, his rout at TPC Potomac and his comeback at Carnoustie, Molinari has now played six weekend rounds while making only a single bogey. One!

That includes 36 bogey-free holes over the last two days in Scotland, as Molinari methodically took apart the demanding links layout while turning in the only bogey-free scorecard out of the entire field on Sunday.

"To go the weekend bogey-free, it's unthinkable, to be honest," Molinari said. "But I felt really good this morning. When I came here, I felt ready for the challenge."

4 While many players would quiver at the thought of a final-round tee time alongside Woods with a major on the line, Molinari didn't blink. Perhaps because he's been in similar situations before.

In addition to his supporting role during Mickelson's win in 2013, Molinari has twice faced off with Woods in the Ryder Cup - including a 2012 singles' draw that remains Woods' most recent Ryder Cup match. So stepping to the tee Sunday, Molinari was fazed neither by his playing partner nor by the three co-leaders that sat three shots ahead of him.

"Clearly in my group, the attention wasn't really on me, let's put it that way," Molinari said. "If someone was expecting a charge, probably they weren't expecting it from me, but it's been the same the whole of my career."

5. How times change. Just a few weeks ago, Molinari opted to tee it up at the Quicken Loans National instead of the French Open at Ryder Cup venue Le Golf National. The reason? He was concerned about his FedExCup standing.

Molinari hadn't done much in the States this year, and he was 123rd in points with his 2019 status very much in limbo. Fast forward a few weeks - including two wins and a runner-up - and Molinari can safely book travel plans on both sides of the Atlantic for years to come.

6. It was a week of what might have been for Jordan Spieth.

Spieth started his stint in Scotland by handing back the claret jug in a ceremony he admitted was more bitter than sweet. But through 54 holes, he was the betting favorite as one of three co-leaders, equipped with a great chance to go back-to-back and end a victory drought that extended back to Royal Birkdale.

Amid a disappointing campaign, it was the first time he started the final round closer than four shots to the lead.

But Spieth apparently used up his magic last year in Southport, as he seemed out of sorts from the start and quickly faded. Spieth didn't make a birdie all day, and he found a gorse bush at an inopportune time en route to a double bogey on one of the easiest holes on the course.

It added up to a 76 and a tie for ninth, another disappointing finish in a year of mixed results. Now he'll have to wait another year for a potential reunion with the jug.

7. Of course, Spieth wasn't the only player who watched a share of the 54-hole lead slip away.

Kevin Kisner held at least a share of the lead after each of the first three days, but his bid for a maiden major went sideways in a bunker on the second hole Sunday. Xander Schauffele's bid lasted significantly longer, as he kept pace with Molinari until the 17th hole.

But in the end, it was a 3-over 74 and a share of second place for both men, who now find themselves firmly in the Ryder Cup mix heading into the homestretch of the selection process.

8. For the first time in his career, Rory McIlroy has a runner-up finish in a major championship. But good luck making sense of his week at Carnoustie years from now.

McIlroy was barely a factor over the weekend, having seemingly forfeited his shot at a second Open title during benign third-round conditions. But when his lengthy eagle putt fell on the 14th hole Sunday and sparked a celebration reminiscent of Hazeltine, hope was once again alive.

Ultimately, it was too little too late for the Ulsterman, who couldn't convert a lengthy birdie putt on the 72nd hole that could have putt pressure on the leaders behind him. He'll leave Scotland with a healthy check, but without the feeling that he ever got both feet planted in his quest for the claret jug.

"I just ran out of holes," McIlroy said.

9. If McIlroy's runner-up felt like somewhat of a disappointment, Justin Rose's T-2 finish was nothing short of found money.

Rose needed to birdie the difficult 18th on Friday simply to make the cut on the number, and he rebounded with a third-round 64. The Englishman added a Sunday 69 to lend credence to the notion that, despite only two top-10s in the tournament as a pro, Rose might still have an Open title in him after all.

"I just think having made the cut number, it's a great effort to be relevant on the leaderboard on Sunday," Rose said.

The weekend close continues a recent run of solid form for Rose, who won a few weeks back at Colonial and now has reached a career-best No. 2 in the world rankings.

Direct quotes from @F_Molinari earlier this season when we played together in China.....I saved it in my notes for a moment like this pic.twitter.com/RjZAiPhLNs

So the Champion Golfer of the Year walks into a coffee shop...

Sadly, it seems we may not see these creative retirement plans come to fruition - at least not for a few years. But credit to Molinari for thinking outside the box, and credit to Wesley Bryan for a timely share.

Hair of the Dog: Eddie Pepperell. The 27-year-old Englishman admitted he was "a little hungover" during the final round, but he still put up the day's best score with a 4-under 67 that gave him a share of sixth and his first ever top-10 finish in a major. Drinks all around.

Paris Bound?: Webb Simpson. The Players champ tied for 12th to move past Bryson DeChambeau at No. 8 in the U.S. Ryder Cup standings, with the top eight after the PGA Championship qualifying automatically. Schauffele moved to 11th, while Kisner moved to 13th.

Quiet Consistency: Tony Finau. Finau tied for ninth at Carnoustie and has now cracked the top 10 in each of the three majors this year. In fact, six of his 10 career major starts have gone for T-18 or better. Perhaps something for Captain Furyk to consider.

Quietly Slumping: Sergio Garcia. The Spaniard is barely a year removed from his watershed win, but he has now missed the cut in four straight majors and has missed six of nine cuts overall dating back to the Masters.

Role Reversal: Molinari, who won The Open while playing alongside Tiger 12 years after he caddied for his brother, Edoardo, in a group with Woods at the 2006 Masters. Woods was the defending champ, and Edoardo was the reigning U.S. Amateur winner:

King of Yelp: To the Carnoustie barber that gave Spieth a trim before the third round that set social media ablaze. While Spieth admitted it was a little "high and tight," it became the most famous £9 haircut in years.

Make Your Own Bed: To the frat house of American stars that has become something of an Open annual tradition. While Spieth, Kisner and Zach Johnson fell short of winning the jug for the house, hopefully they all got a few good shots in on all-time goalie Jason Dufner during intra-squad soccer scrimmages.

Kick Him Out: To the obnoxious fan that nearly derailed Tiger's final tee shot. One-upsmanship has become somewhat of a plague among American crowds, but Sunday showed that even the revered Scottish faithful have a few bad eggs in the bunch.

Place Your Bets: With only 17 days until the opening round of the PGA Championship, the Westgate Las Vegas installed Dustin Johnson as a 12/1 co-favorite alongside Spieth and McIlroy. Woods headlines the group next in line at 16/1.

Blown Fantasy Pick of the Week: Justin Thomas. For the second year in a row, Thomas' Open chances fell apart during a rainy second round. It was 67-80 at Birkdale, and this time 69-77 to miss the cut by a shot at Carnoustie. Watching what Rose did after finishing only one shot better through 36 holes only adds salt to the wound.